This is where the rubber meets the road for Boise State’s Brett Rypien, as in, where the props meet the pavement. Rypien continues to be one of the highest-rated quarterbacks in the country, but he has unfinished business. Yesterday he made the cut as the Johnny Unitas Golden Arm Award field was whittled to a final 15. Rypien is the only Mountain West quarterback in that group, and one of just three Group of 5 quarterbacks. But that will ring hollow without a Bronco victory at Air Force Saturday. It was at the academy that Rypien had the most inaccurate game of his career two years ago, going 9-of-26 in a 27-20 loss to the Falcons. He did cover 316 yards thanks to some bombs to Cedrick Wilson and Thomas Sperbeck. But with nine minutes left in the game, Rypien was a stunning 6-of-23.

Here’s what Rypien is expected to live up to at the Colorado Springs house of horrors. He needs just 649 yards now to move past former San Diego State quarterback Ryan Lindley for the Mountain West career passing yards record. Rypien is the FBS active career leader in passing yardage with 12,042. He’s currently top 10 in the country this season in passing yards and completions per game. And Rypien’s pass efficiency rating is back up to 158.4, 19th nationally, after his performance against Colorado State. Fans will pay to see the A-game Brett Rypien. The Broncos need that Saturday.

That agonizing three-game losing streak to Air Force from 2014-16 makes it easy to forget how Boise State—and Rypien—played against the Falcons in 2017 on the blue turf. By that time, September was lost in the rear view mirror for Rypien, and he threw for exactly 300 yards on 16-of-22 passing, with three touchdowns and no interceptions in a 44-19 victory. It was his most efficient performance of the season. The Broncos didn’t allow a sack and were 6-of-12 on third down after converting just one of 12 the year before versus Air Force. And the defense held the Falcons to 181 yards rushing on 51 carries. But it’s the 2016 game that fires everybody up, don’t you know.

Of course, the stunning 2015 loss to Air Force on the blue turf fires people up, too. That’s when the Falcons threw for 279 yards on just nine completions while beating Boise State 37-30. Which brings up strategy. The Broncos’ Curtis Weaver had 2.5 sacks in the win over Colorado State last Friday and now has 5.5 for the season, tied for first in the Mountain West on a sacks-per-game basis. Air Force can throw this season and did last week while beating UNLV. So if the Falcons do try to sucker the Broncos and throw Saturday, what is Weaver and his defensive line mates to do? As coaches might be saying in practice: “Stay in your lane and keep your eyes right.”

The San Diego State offense is struggling enough that you never know what might happen at Nevada Saturday night. The Aztecs rank 10th in total offense in the Mountain West, averaging just 334 yards per game. They’re 11th in scoring, averaging 20.7 points. One factor: quarterback Christian Chapman has been out since Week 2 with a sprained knee. The recovery time was supposed to be about six weeks, but that isn’t happening. SDSU coach Rocky Long says Chapman would play only in an emergency against the Wolf Pack—if something happens to the three QBs ahead of him. Ryan Agnew has been filling in as the starter. But you know what? The Aztecs have won six games in a row.

More than seven weeks after Rees Odhiambo was cut loose by Seattle, the former Boise State star is getting another chance in Atlanta. The Falcons signed Odhiambo to their active roster off the Indianapolis practice squad yesterday after losing starting right guard Brandon Fusco to a season-ending broken ankle in Monday night’s 23-20 win over the Giants. The coolest thing that has happened to Odhiambo this year came in early August, when he was sworn in as a U.S. citizen in Tukwila, WA. It was a journey that had lasted 18 years, since he moved to the Dallas area with his mother from Nairobi, Kenya.

It’s back to Big Sky play this week for Idaho State, as the Bengals will be the first to test former Boise State star Matt Miller in his new role as offensive coordinator at Montana State. The Bobcats have won 11 straight in the series, but they’re likely to have trouble keeping up with ISU in a track meet in Holt Arena. The Bengals already have 25 plays of 30 yards or more this season, with quarterback Tanner Gueller pulling the strings. They’re averaging more than 543 yards and 41 points per game. Idaho State lost 48-41 at Liberty last week, but there’s no shame in falling by just seven points across the country at an FBS school. Gueller threw for 397 yards and four touchdowns against the Flames. He has now broken the ISU career record with 65 TD passes

That mildly surprising vote last week that predicted Boise State to finish fourth in the Mountain West men’s basketball race? Maybe the media did their due diligence and remembered that Justinian Jessup is on this team. As the Broncos spread their scoring upon the departure of Chandler Hutchison, Jessup is a good place to begin. The junior guard has started 66 games the past two years, and last season he nailed 90 three-pointers, the second-best total in Boise State history. More significantly, Jessup shot 45.7 percentage from beyond the arc, the No. 9 mark in the country. He is also the Broncos’ leading returning scorer at 11.6 points per game.

There is one former Boise Hawk in the 2018 World Series: L.A. Dodgers leftie Rich Hill, who is slated to start Game 4 Saturday night at Chavez Ravine. This will be Hill’s second Fall Classic. He started two games against Houston in the Series last year, with two no-decisions, a 2.08 ERA, and 12 strikeouts in 8 2/3 innings. Hill was a dependable producer for the Dodgers this season, going 11-5 with a 3.66 ERA. His big league career treaded water for 10 years until a breakout season with Oakland in 2016, during which he was traded to L.A. Hill, now 38 years old, is from the “you never know” camp. In two stints with the Hawks in 2002 and 2003, he went a combined 1-8.

October 25, 2003, 15 years ago today: Boise State sets a school record for scoring in a game in a 77-14 romp over San Jose State in Bronco Stadium. The points parade eclipsed the 74 amassed in a shutout of Humboldt State in the first game played on the blue turf in 1986. The Broncos emptied the bench in the second half, and freshman quarterback Jared Zabransky came on to throw his first career touchdown pass. Coincidentally, it went 77 yards to former Nampa Bulldog Jerry Smith.

When TV households do matter 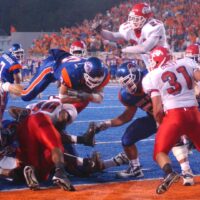 This Day In Sports: An epic blue turf scene, and an epic rout