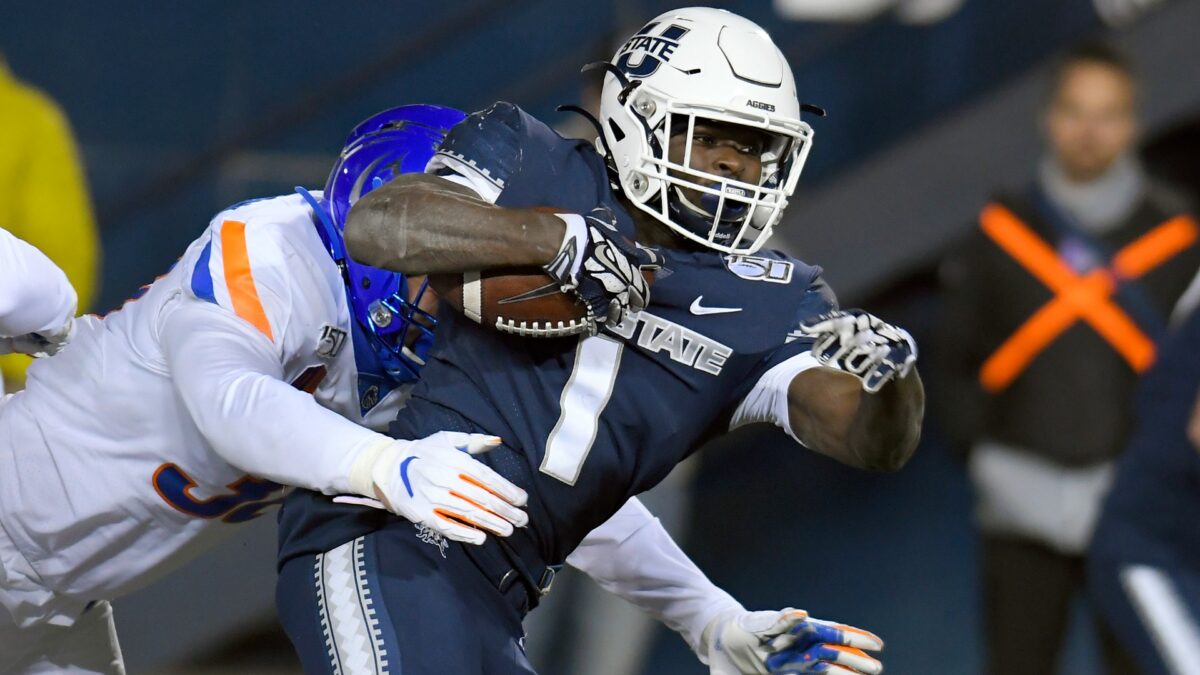 There’s an overhaul in progress on the Boise State defense. But all is certainly not lost. The star performers will just be different this year. Three possibilities I have an eye on are Demitri Washington, JL Skinner and Brock Miller. And it starts with Washington. The sophomore STUD end/linebacker is the heir-apparent to Curtis Weaver, and he played like it down the stretch last season, logging four sacks in the Broncos’ final five games. Washington added a fumble recovery in the Mountain West championship game win over Hawaii. “The sky is the absolute limit,” Boise State defensive line coach Spencer Danielson told the media yesterday. “Look for 38 to be one of the best on the West Coast.” How do Washington and Weaver compare in terms of size? Weaver was 6-3, 265 pounds. Washington is 6-3, 272.

JL Skinner could be the next George Iloka at safety for Boise State. Skinner has the size at 6-4, 214 pounds. He seemed to have the skills as his playing time increased last season. If Skinner can match Iloka’s demeanor, he’s there. He’s going to be the first Bronco ever to wear No. 0. Brock Miller is intriguing at linebacker. The graduate transfer started 11 games at North Carolina State last season and had seven tackles-for-loss. “He fit in the room perfectly,” said fellow ‘backer Bruno DeRose of the 6-4, 234-poud Miller. “He’s a long guy—he moves really well.” Will his addition make the Boise State linebacking corps the strongest in the Mountain West? In a group that includes Riley Whimpey, Zeke Noa, Benton Wickersham and DeRose, it could.

DEEP, YOUNG D-LINE – MINUS ONE

Danielson started off his media session Wednesday by saying, “We have a ton of talent in that (defensive line) room. The future is very bright. And not one of them are seniors.” It’s been a productive recruiting spot for Boise State for years. The Broncos are missing one of the recent recruits, as defensive end Dylan Hall announced yesterday he has entered the transfer portal. Hall, a 6-5, 256-pounder, redshirted last season. But Danielson is excited about a group that still includes guys like Washington, Scale Igiehon, Scott Matlock, Utah transfer Jackson Cravens and junior college transfer Shane Irwin. Danielson could hardly stop talking about Matlock, the Homedale High graduate.

Mark Rypien got his first chance to start for Washington in Week 4 of the 1988 season when Doug Williams had an emergency appendectomy. He threw for 303 yards and three touchdowns against one interception, but Washington lost to the Phoenix Cardinals that day. Rypien says that’ll be the bottom line when his nephew Brett, the former Boise State star, gets his first start for Denver tonight against the New York Jets. “What I was sick about was that in the end, we came out with a loss,” said Mark Rypien at DenverBroncos.com. “I think that’s how you’re evaluated in this game.” With that said, Uncle Mark is thrilled for Brett. “I think he’s always shown from the first day he arrived in Boise to the first day he arrived in Denver that he was going to do everything he could and whatever they asked him to.”

Kamalei Correa is apparently in the middle of the Tennessee Titans’ coronavirus outbreak. Correa has been placed on the Titans COVID-19/reserve list for their game against the Pittsburgh Steelers. The former Boise State standout is the fourth Tennessee player to test positive in the past two days—there have no been 10 since last Saturday. Correa, in his fifth NFL season, did play in last Sunday’s win over the Vikings. The NFL announced this morning that the Titans-Steelers game, the first game postponed due to COVID, has now been indefinitely suspended.

NO CHOICE BUT TO BE PATIENT

The wait continues for the release of the Mountain West football schedule. The plan is for eight games per team, but the conference has a lot to work through as it considers Hawaii’s travel challenges and protocols in the state of California, among other things. The Honolulu Star-Advertiser reports that the Rainbow Warriors suspended all team-related activities at the school’s athletic complex Wednesday after four football players tested positive for the coronavirus. San Jose State is moving practice to Humboldt State in Arcata, 323 miles away on California’s far northern coast. Boise State wide receiver CT Thomas said yesterday the team has “guys in quarantine,” although there’s nothing official on that from the university.

The Boise State women’s basketball team, winners of four straight Mountain West championships and coming off a 24-9 season, will open the season November 25 at ExtraMile Arena against College of Idaho. We know that because the Coyotes released their schedule yesterday, and that was on it. The Yotes, who were 12-18 last season, will play the game as an exhibition.

October 1, 2005, 15 years ago today: One of the wildest games in Boise State history, as the Broncos erase a 20-7 halftime deficit with a 92-yard punt return for a touchdown, a 69-yard return of a blocked field goal for a TD, and a rare defensive two-point conversion on a return of a blocked extra point to stun Hawaii, 44-41. Quinton Jones had the school-record punt return, while Daryn Colledge knocked down both kicks and Orlando Scandrick scored on both runbacks. The victory at Aloha Stadium was Boise State’s 27th in a row in the WAC.