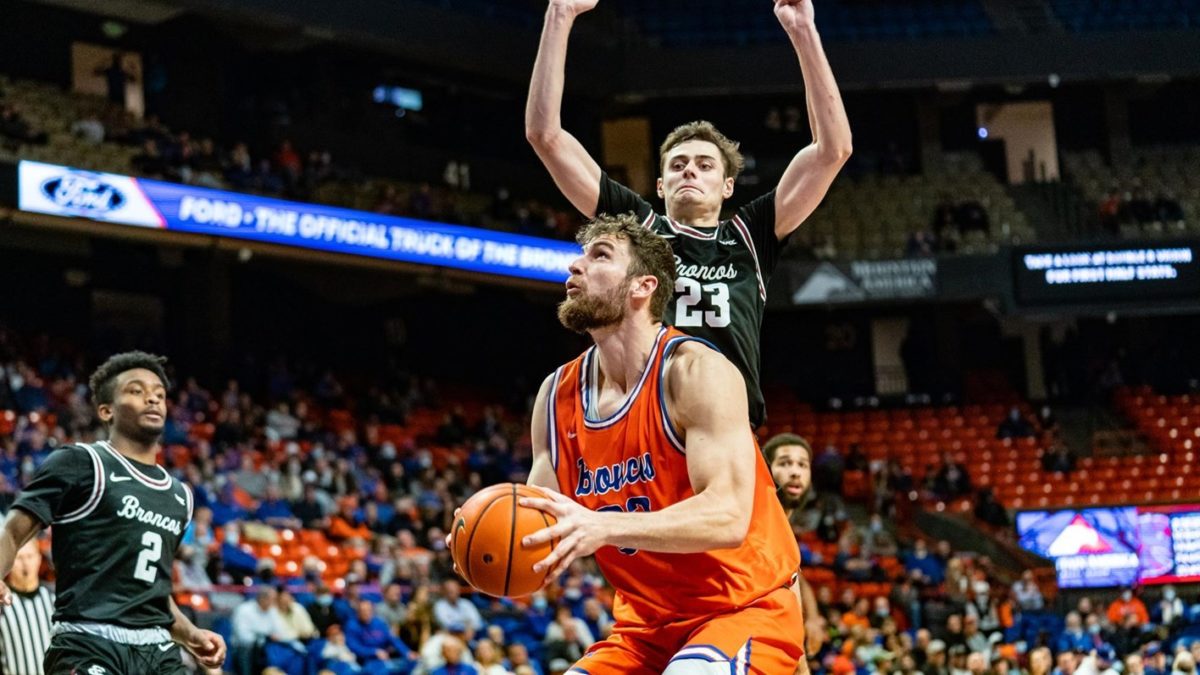 Mladen Armus led by example Tuesday night, scoring 17 points and pulling down 12 rebounds in Boise State’s 72-60 win over Santa Clara in ExtraMile Arena. Armus played really hard and was unstoppable in the paint, and that was the difference as the visitors wore down late in the game. Boise State ended the night on a 17-4 run, with Armus grabbing seven of his boards during that final surge. Up to that point, this was indeed a battle between the two sets of Broncos, with 17 lead changes in the game. Boise State built a 12-point first-half lead, but Santa Clara ended the half on a 21-6 run and led 30-27 at the break. With a stifling defensive effort down the stretch, Boise State had a 12-point lead at the end.

There’s a lot to digest in the box score. Armus had a monster game, but he wasn’t the hometown Broncos’ leading scorer. That was the ever-present true freshman, Tyson Degenhart, with 18 points. Boise State’s three-point woes reared their ugly head, as the Broncos started the game 0-for-9 from beyond the arc. They didn’t hit a three until almost five minutes had elapsed in the second half, but they went 5-for-8 from there. Due to injuries, coach Leon Rice was able to go just seven deep, playing only Naje Smith and Max Rice off the bench. But Boise State’s stamina held up, especially on defense. The Broncos scored 27 points off 19 Santa Clara turnovers. Your exclamation point? Boise State was 9-for-13 from the free throw line.

Yesterday it was tomorrow in Australia, if you follow me. So Boise State may have been the first school in the country to get a letter of intent, as Aussie punter James Ferguson from Geelong signed as soon as his time zone permitted. Ferguson takes pride in being an Australian kicker. “It’s the X factor that us Aussie boys bring,” Ferguson told 247 Sports when he committed to the Broncos. “Us Aussies can control the ball and pinpoint where to land it. I grew up kicking a ball around and it’s something that is natural to me.” In a manner of speaking, Ferguson has already used a redshirt year. He attended Victoria University in Melbourne for a year, and that counts against his NCAA eligibility. So Ferguson has four seasons to play four at Boise State.

A FORMER LION TO THE HOME LAIR

On the eve of early signing day, a hometown guy who starred in the Big Sky decided Boise State was the place for him. George Tarlas, a Borah High grad who was an all-conference defensive end at Weber State the past two seasons, has committed to the Broncos out of the transfer portal. The 6-4, 240-pounder was the Wildcats’ second-leading tackler this season with 55 stops. Tarlas had eight tackles for loss and five sacks with forced four fumbles. In the past few weeks he’s taken visits to UCLA and Syracuse and also had offers from Utah, Arizona and San Diego State, among others.

Maybe things will change the next few nights, but this Jimmy Kimmel LA Bowl thing isn’t going so well for the Mountain West (nor the Pac-12). “Who is playing in this game of mine again? I forget,” said Kimmel on the Yahoo Sports College Football Enquirer podcast. That confirms this sponsorship is more gimmick than goodwill. Utah State and Oregon State will just have to settle for the exposure they’ll get from Saturday night’s slot on ABC. The game itself should be good—Oregon State is in its first bowl game since its Hawaii Bowl win over Boise State in 2013. Utah State, of course, was the surprise winner of the Mountain West championship.

Carson Strong made it official Tuesday. The Nevada quarterback will declare early for the NFL Draft and skip the Wolf Pack’s appearance in the Quick Lane Bowl against Western Michigan. Strong acknowledged on a taped show at Nevada Sports Net that the sudden departure of coach Jay Norvell to Colorado State a week and a half ago “provided clarity” for him. Strong’s first order of business is healing his ailing right knee, but he said he had an MRI on it last week, and his doctors told him “it looked great.” Over the last two seasons, Strong has thrown for 7,044 and 63 touchdowns against just12 interceptions.

PROPS BETWEEN THE PIPES

The Idaho Steelheads open a three-game series against Rapid City tonight in Idaho Central Arena, and they go in with the new ECHL Goaltender of the Week. Jake Kupsky earned the honor by posting a pair of wins against South Carolina last weekend in Boise, allowing just one goal each night. For the season, Kupsky is 6-2 with the ECHL’s best goals-against average at 1.60. Going into tonight’s game, the Steelheads own the most home wins in the ECHL with nine and sit atop the Mountain Division with a 14-7-1 record.

This Day In Sports…brought to you by BACON BOISE…now sending bacon around the globe!

December 15, 2011, 10 years ago today: After a stellar four-year career, Nate Potter becomes Boise State’s second consensus All-American. Potter, the senior left tackle out of Boise’s Timberline High, was named a first-team selection by the Sporting News, the final of the five All-America squads that go into the NCAA’s consensus equation. Potter had already made the Football Writers Association of America first team and the AP and Walter Camp second teams. Interestingly enough, Boise State’s other consensus All-American, Ryan Clady in 2007, was also a left tackle. 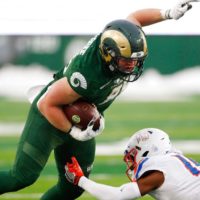 The McBride of Frankenstein