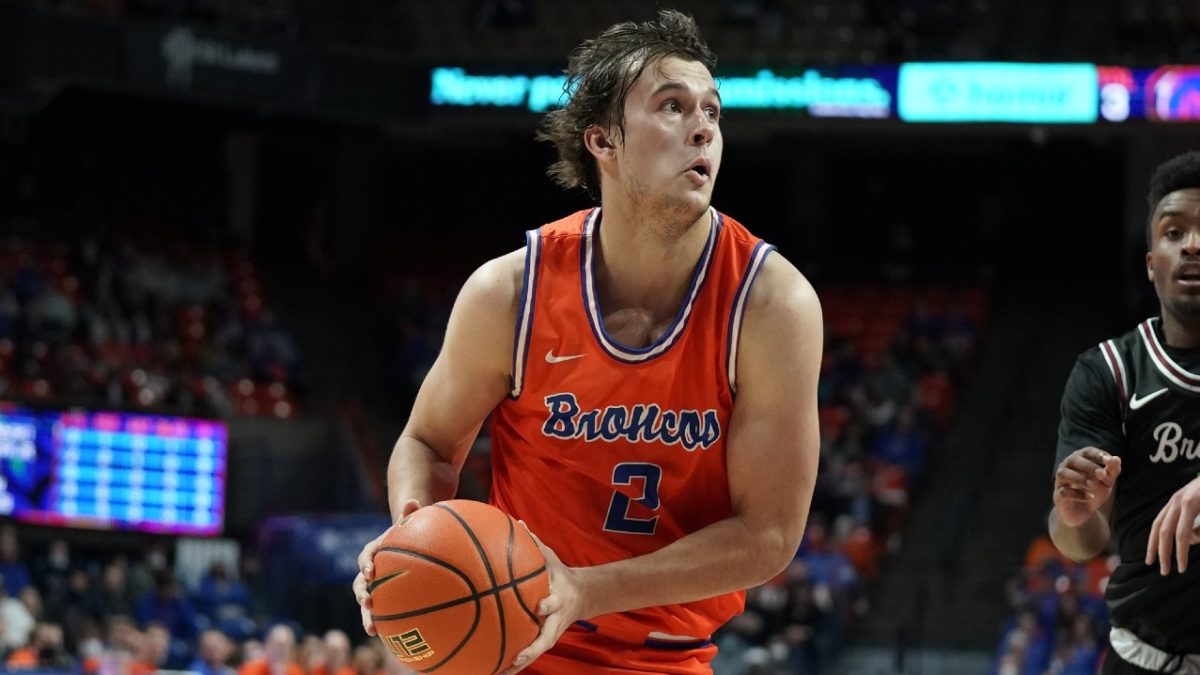 Okay, we’re putting the pressure on Tyson Degenhart tonight. The Boise State true freshman is 12 games into his college career—six games in as a starter—and we’re already hyping a homecoming. Degenhart, who was just named Mountain West Freshman of the Week for the second consecutive week, returns home to Spokane tonight as the Broncos play a neutral-court game against Washington State in Spokane Arena. We don’t know how much Degenhart was recruited by WSU. Or Gonzaga for that matter. But Degenhart is neither a Coug nor a Zag. Can he make them wish he was? Degenhart is averaging 15.3 points per game since being inserted into the starting lineup three weeks ago. He displays a steely resolve when he’s on the floor, and man is he a team player. And he’s already showing leadership.

A road win over Wazzu would look good in March, even if an at-large berth in the NCAA Tournament is a long shot now. The Cougars are 8-4 and ranked in the top 50 in both the NCAA NET and KenPom ratings—No. 50 and No. 44, respectively. A victory over a Pac-12 school would feel good, too. They don’t come along very often, as Boise State is 11-36 all-time against the Pac-12. Washington State has been been wildly inconsistent, though. WSU has that bizarre 51-29 win at Arizona State, but the Cougs also have home losses to Eastern Washington and South Dakota State.

When Kent State rolled up 374 yards on Wyoming in the first half of the Famous Idaho Potato Bowl Tuesday—yet led only 24-21—you had to wonder, “what the heck is goin’ on here?” That was only the beginning. Yes, the Golden Flashes did go on to break Idaho’s record for total offense in the game, rolling up 656 yards. But the Cowboys put up their own pinball numbers in the second half, 305 of them, and pulled away from the Golden Flashes to win 52-38 on the blue turf in an entertaining game chock full of big plays. The Pokes ultmately wore the Flashes down with a bowl record 408 yards on the ground.

The over/under on this game from oddsmakers was 59 points. Yeah, they topped that by just a little bit. The 90 points was second only to that crazy 61-50 win by the Vandals over Colorado State in 2016. There was a plethora of other bowl records set Tuesday. Let’s start with two 80-yard plays. A bomb from Kent State’s Dustin Crum to Dante Cephas was the longest in Famous Idaho Potato Bowl history, and an 80-yard run by Wyoming quarterback Levi Williams broke the record of another quarterback, Boise State’s Bart Hendricks, who romped 77 yards against UTEP in 2000. Williams’ 200 yards rushing overall were the fourth-most ever in the game, and (not surprisingly) the top performance by a quarterback. His four touchdowns tied the FIPB record. Williams was the game’s Most Valuable Player.

Can we now say the Mountain West is pretty good this year? The conference won its fourth postseason game in as many tries Tuesday night when San Diego State took down Conference USA champion UTSA 38-24 in the Frisco Bowl. And get this: SDSU did it with the passing game, as Lucas Johnson threw for 333 yards and three touchdowns. The Aztecs won on someone else’s field wearing their home jerseys. Come to think of it, they did that all season long in Carson. San Diego State thus secures the first 12-win season in school history. Hawaii is up next for the MW, having snuck into the Hawaii Bowl with a 6-7 record to face Memphis on Christmas Eve. This might be where the streak ends—the turbulent Rainbow Warriors are 8½-point underdogs.

THIS ‘CIRCUS’ IS ALWAYS IN TOWN

This video from The Athletic is making the rounds this week. I don’t know why now (maybe because the 15th anniversary of the 2007 Fiesta Bowl is coming up?). But it includes a snippet of the interview with former Boise State quarterback Jared Zabransky about “circus,” the hook-and-lateral that tied Oklahoma with seven seconds left. It must be a Christmas present for Bronco Nation, which still gets goosebumps every time it’s shown. There are always reminders of the sidebars. “Ian (Johnson) lines up on the stinkin’ wrong side,” said Zabransky. “So I grabbed him—put him on the left side.” That was important, because Zabransky and Johnson were designed to be safety valves sprinting behind Jerard Rabb, just in case he wasn’t going to make it to the end zone. (Excuse me, I’m going to watch it again.)

Since this is my final column before Christmas, it’s my chance to address Mark Johnson’s KTVB retirement Thursday night. This is the end of an era for all of us. I met him shortly after he arrived in Boise in December, 1983, and we became fast friends. Loved doing Boise State TV games with him in 1987-88 and 2008-09 (those last two years, needless to say, were somethin’ else). Mark and I even did Vandals TV games for a bit in the late 1990s. And we had a lot of off-camera adventures. I’d call Mark a generational local talent. You cannot teach the natural ability he has to ad-lib and entertain when appropriate, and to seamlessly juggle that with seriousness, thoughtfulness, caring and honesty. While KTVB will survive and thrive, it won’t be the same without him. Here’s to you, buddy.

December 22, 2011, 10 years ago today: Boise State’s Kellen Moore era ends with a dominating 56-24 win over Arizona State in the Las Vegas Bowl. The Broncos’ senior class became the first in college football history to win 50 games in four years, sharing that number with Moore, the winningest college quarterback ever. The game started with a 100-yard kickoff return by Doug Martin, who was named the bowl’s Most Valuable Player in his final game with 301 all-purpose yards, the most in school history. Boise State also got a game-clinching 100-yard interception return from Jamar Taylor, setting another school record. Moore threw for 293 yards and the final two of his 142 career touchdown passes.

It’s now a staple of both teams’ schedules

The asterisk remains at quarterback