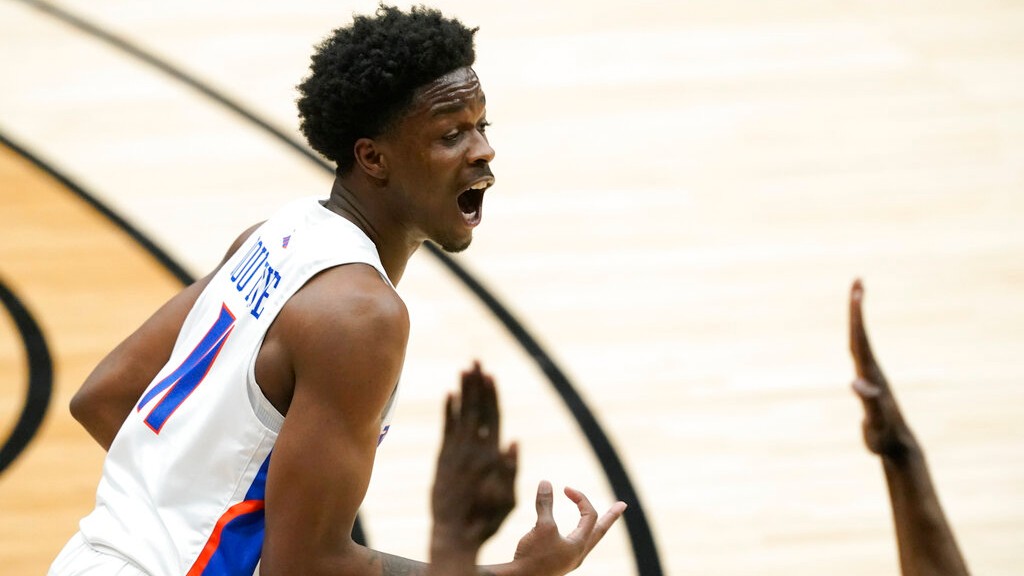 Did you really think the game was over with 11 minutes left in the first half? That’s not the way it works with Boise State this season. But after leading by 21 points, the Broncos hung on for an exciting 85-84 win over SMU in the first round of the NIT in Frisco, TX. What Boise State did in those first nine minutes was unfathomable: 8-for-10 from three-point range and a 30-9 lead. The Mustangs caught fire, as you guessed they would, and caught the Broncos in the second half. It see-sawed down the stretch until Devonaire Doutrive grabbed an offensive rebound tipped by Mladen Armus and floated in a bucket with 10 seconds left. At the other end, Doutrive made a steal during a mad scramble under the basket as the clock ticked toward zero. Boise State got the one stop it needed. SMU led for just 51 seconds in the game.

The defensive lapses that have plagued Boise State in the second half of the season were present. But let’s tip a cap to the offense. I wondered if the Broncos were going to be able to pull themselves up by the bootstraps, and their performance early proved that they did. For the game, Boise State shot 51 percent from the field and 48 percent from three-point range while logging 21 assists on 30 made baskets. There were five Broncos in double figures—and none more important than Armus, who had a double-double. Armus scored a season-high 18 points and pulled down 10 rebounds, and it seemed almost every one of them saved the Broncos from SMU damage. Now, who do you want to win Saturday? Dayton or Memphis? Boise State plays the winner next Thursday.

A PACKED 48 HOURS COMING UP

The Mountain West dives into the NCAA Tournament late this morning when 11th-seeded Utah State facing No. 6 Texas Tech. It’s time for Neemias Queta to shine. The Red Raiders are favored by four points. Later tonight, San Diego State takes on Syrcuase in another 6 vs. 11 matchup, with the Aztecs a three-point favorite. The Orange will have to figure out SDSU’s smothering defense. Also, Colorado State plays Buffalo in the NIT this evening.Saturday morning in the Big Dance, former Borah High star Ellis Magnuson gets a dream fulfilled when he suits up for 14th-seeded Eastern Washington against Kansas. And Saturday night, BYU meets the winner of the 11-seed play-in game between Michigan State and UCLA—it was the Bruins in dramatic fashion Thursday night, 86-80 in overtime.

This was not expected, at least on the outside. Boise State women’s star Jade Loville, the Broncos’ leading scorer, has entered the transfer portal and will play her final two seasons elsewhere. It’s a blow to a squad that featured 10 freshmen this season. Loville was one of only three returnees from last year’s Mountain West championship team, becoming the focal point upon the departure of Riley Lupfer, Braydey Hodgins, Jayde Christopher and A’Shanti Coleman. And she had a magnificent season, averaging 17.1 points per game and setting a Boise State record when she put up 40 points in February in a win at UNLV. We may never know why she left, but it sure would be interesting.

A couple NFL catch-up things: Kellen Moore, who witnessed Thursday night’s Broncos victory, has his quarterback for the next four years, of course. Dak Prescott’s boffo $40 million-per-year contract says so. Now, who will be his backup? Moore worked well last year with his old college foe, Andy Dalton, but Dalton has signed with the Chicago Bears. Some are saying deposed Bears QB Mitch Trubisky would be a good fit. Wouldn’t that be ironic? Moore could coach him out of his perpetually bad decisions. And former Boise State linebacker Tanner Vallejo still has value, as he has been re-signed by Arizona for two years and $4.1 million. Vallejo has been a soecial teams mainstay, playing only 96 defensive snaps for the Cardinals last season. But he finished the year with 12 tackles and a sack versus the L.A. Rams.

It’s a full weekend on the College of Idaho campus. The Coyotes football squad plays its second game of the spring, hosting Rocky Mountain Saturday at Simplot Stadium. The player to watch for the Yotes is running back Nick Calzaretta. C of I rolled up 328 yards rushing on the Bears in a 42-0 romp in 2019, and Calzarretta had 133 of them on just 15 carries. Rocky, however, opened the season with a 14-12 win over Carroll last week. Over at Wolfe Field, College of Idaho hosts perennial baseball power Lewis-Clark State in a four-game weekend series beginning tonight. The Warriors come in 14-2, while the Yotes are 13-14.

It’s tough to have to scroll, scroll, scroll to find Troy Merritt’s score in a PGA Tour event, but the Boise State product and Meridian resident is near the bottom of the leaderboard at the Honda Classic. Merritt teed off on No. 10 and started with back-to-back bogeys on the PGA National course. He never recovered and ended up with a four-over 74, tied for 106th.

March 19, 1966: A landmark day in college basketball history, as Texas Western (now UTEP) wins the NCAA championship with a 72-65 triumph over Kentucky. It was the first time an all-Black starting five had won the national title, and it came against a Wildcats team that was all-white. Adolph Rupp, Kentucky’s coach from 1930-72, did not recruit African-American players, although some historians in the Bluegrass State dispute that. Rupp signed his first Black player, 7-2 center Tom Payne, in 1969.