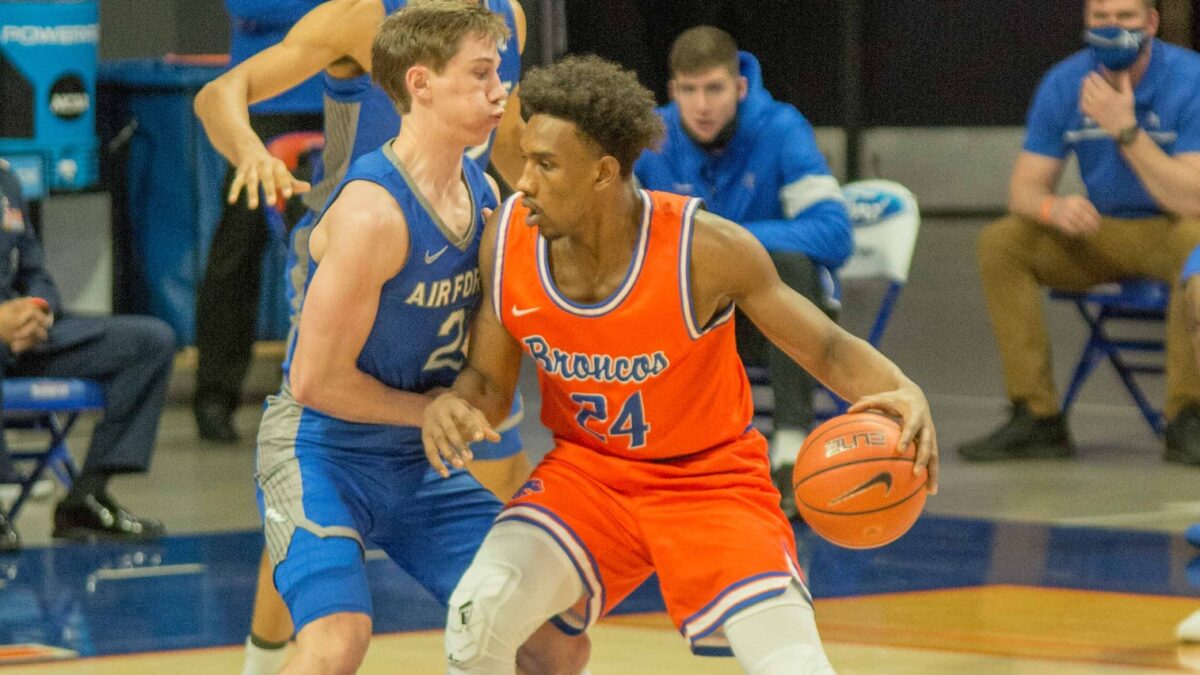 Boise State’s uncanny men’s basketball depth this season is reflected not only in scoring balance, but in distribution of minutes. The leader in minutes a year ago was Justinian Jessup at 36 per game, followed by Derrick Alston at 33. This season, RayJ Dennis and Alston are tops at 31 minutes per game. The big picture: there are eight Bronco logging at least 22.8 minutes per game so far. Last season there were six in that category. Thirty minutes for this team is a lot, especially when all the cylinders are firing. And it’s hoped that Emmanuel Akot will rejoin the rotation tonight as Boise State opens a two-game series against Fresno State in ExtraMile Arena. Akot, who has missed the past three games, is averaging 9.0 points and 4.5 rebounds per game and might be the Broncos’ best defender.

There’s not much Boise State can cull from video of its lone game last year versus Fresno State. The Broncos won in an 87-53 romp, handing the Bulldogs their worst loss ever in Save Mart Center. It was a game that Boise State finished, literally and figuratively. After Fresno State had pulled to within 47-37 with just over 13 minutes remaining in the game, the Broncos ended it on a 40-16 run. That night gave us another glimpse of things to come from Abu Kigab. Just over a month into his Boise State career, the Oregon transfer scored 14 of his 23 points in the second half to spur the rout. This season’s edition of the Bulldogs is 5-5 overall and 3-5 in the Mountain West after being swept at Nevada last weekend.

Boise State wide receivers coach Matt Miller said Tuesday that both CT Thomas and Octavius Evans will return to the Broncos this year as “super seniors,” taking advantage of the extra year of eligibility granted by the NCAA due to the pandemic. It gives Evans one more chance to shine. Along with Khalil Shakir, Thomas and Evans were supposed to form the most formidable wide receiver trio in the Mountain West this past season. But it was never quite a trio. Evans started well, with four catches for 53 yards in the first two games. He caught a touchdown pass from Jack Sears at Air Force in Week 2, but we didn’t see him after that. The fact that Evans was removed from the depth chart had us wondering if he was headed for the transfer portal. But that is not the case.

Pete Kwiatkowski isn’t one to move around much. The former Boise State star and defensive coordinator has been at Washington the past seven seasons after heading to Seattle with Chris Petersen. He had spent the previous eight years on Coach Pete’s Broncos staff. But sometimes you just have to take risks, and sources tell the Seattle Times that Kwiatkowski is headed to Texas to serve as D-coordinator under new coach Steve Sarkisian. The Times pulled out this nugget: “From 2010 to 2017, his (Boise State and Washington) defenses allowed the fewest points per game (18.7) of any coordinator in major college football.” Kwiatkowski played at Boise State from 1984-87 and was a first-team Division I-AA All-American and the Big Sky Defensive Player of the Year as senior.

KELLEN AT THE IMPROV

NFL Network’s Tom Pelissero tweeted Tuesday that Kellen Moore was interviewing that day for the Philadelphia Eagles head coaching job. There’s been speculation that Moore would show up with a detailed PowerPoint presentation on his offensive philosophy and ideas. But I think it would be more impressive if Kellen went off the cuff like he did right out of Boise State during his session with Jon Gruden on “Gruden’s QB Camp.” In one segment, Gruden shuttled rapid-fire through about 10 different Boise State formations and shifts on tape and had Kellen explain them. “You guys are nuts,” he told Moore, who dissected each one. “Our whole goal is to make it look as confusing as possible,” replied Kellen. Gruden’s closing line on the show as the two walked off the practice field: “I wish I could spend about three days with you.”

IT’S STILL ON FOR DEAYON

Donte Deayon didn’t log any stats in the L.A. Rams’ 32-18 playoff loss to the Green Bay Packers last Saturday, but he did get into the game (and he’s literally richer for it). The former Boise State standout spent all season on the Rams practice squad before being promoted to the active roster last week. Deayon, the guy with the mile-wide smile, has played in 11 regular season games and one playoff game over five seasons in the NFL, but the dream is still alive. At the age of 26, Deayon has been signed to another reserve futures contract by the Rams.

What would make independent baseball instantly attractive to Boise Hawks fans? Hiring a guy like Gary Van Tol as manager. And the Hawks have hired that guy. Van Tol, less than a year removed from a storied but short run as Boise State’s baseball coach, will take over field duties as the Hawks move from MLB affiliation to the Pioneer League. He can develop players. And with control over his roster, he can win. Van Tol managed the Hawks when they were a Chicago Cubs affiliate in 2013-14 and made the Northwest League Playoffs each year. One of the lines among the Van Tol quotes from the Hawks press release: “the chance to keep my Boise State staff together.” He said on KTIK’s Idaho SportsTalk that he’s been able to hang onto his top two Broncos assistant coaches.

AAC NOT REALISTIC FOR AZTECS, EITHER

It’s old news here, but a story in the San Diego Union-Tribune last weekend included comments from San Diego State on the rumored conversations between Boise State, SDSU and the American Athletic Conference. “A non-story,” said Aztecs athletic director John David Wicker. “Even if this is something we wanted to look to do, it’s a non-starter because we can’t put all our teams in the American and there’s no viable alternative on the West Coast for the rest of our teams (if football went to the AAC).” That pretty much sums up the Broncos’ situation, too. It was in late 2011 that Boise State and San Diego State announced a football-only move to the Big East, only to have that conference crumble. Both schools decided to stay in the Mountain West a little over a year later.

January 20, 2007: More than 25,000 fans crowd the streets of downtown Boise and jam around the Capitol for Boise State’s Fiesta Bowl Celebration Parade and Statehouse Salute. The loudest chant was a “Pete-Pete-Pete” reserved for coach Chris Petersen as the Broncos lined the steps behind him. A roar almost as large went up when Fiesta Bowl offensive MVP Jared Zabransky stepped to the podium. Zabransky soaked up the adulation a little over a year after hearing some boos while accepting the MPC Computers Bowl MVP trophy.