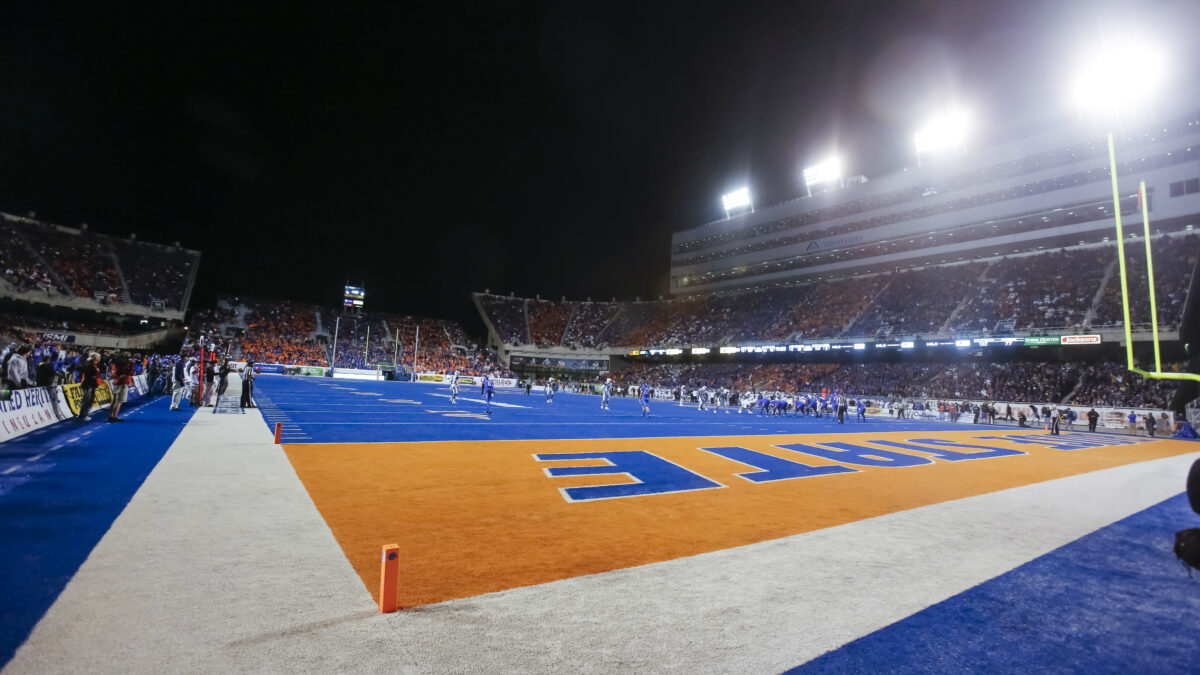 We knew this was coming, but the fact that Boise State made such a big deal of it was telling. There will indeed be full capacity at Albertsons Stadium in the upcoming season. To athletic director Jeramiah Dickey, that means selling the place out. “This is the launching pad to do that,” said Dickey at Tuesday’s announcement. He added that there will be “more announcements in the next month to six weeks” that impact fans. It impacts players, too. “Being able to play in front of their families, their friends and Bronco Nation is a big deal,” coach Andy Avalos said.

Dickey doesn’t see why the Broncos can’t sell out six football games on the blue turf this fall. He again “guaranteed” it at Tuesday’s press conference, smiling. It’s very difficult to do that in this era of distractions and short attention spans. The TV experience on the couch improves all the time, and fans became accustomed to that last season. On the other hand, the Treasure Valley is the fastest-growing area in the country. There were about 590,000 people in Ada and Canyon Counties when Kellen Moore was a Boise State senior. Now there are more than 750,000. How do you get the newcomers in the fold? Dickey calls his athletic department an “outbound office,” and he plans to get out and reach the newbies. “Everything counts, everything matters,” said Dickey.

Dickey has a lot on his plate. He said at Tuesday’s presser that football season ticket renewals “have plateaued” at 75 percent right now. With the hoopla of this announcement, Dickey expects that to “move in a positive direction in the next 24 to 48 hours.” He added there’ll be full capacity for all sports, and men’s basketball will be another key piece of that puzzle. As for the east side stadium renovation, Dickey said the university is still conducting a complete facilities assessment. Florida State? “We have reached out,” Dickey said. Alcohol sales? They’re “still navigating” that situation. There were no questions on conference alignment, which Dickey admitted afterward was a little surprising to him.

Gary Van Tol will be back in uniform tonight at Memorial Stadium. Instead of coaching Boise State, he’ll be managing the Boise Hawks in their home opener against the Grand Junction Rockies. It’ll be Van Tol’s first game in the ballpark since a 12-9 Broncos’ victory over Niagara University on March 11, 2020, the last game before the season was canceled due to COVID. That, of course, was the final game in the program’s history before it was eliminated at the beginning of July. Van Tol was responsible for the Hawks’ last sustained stretch of success, leading the club to the Northwest League championship game in 2013 and to the NWL semifinals in 2014.

A NEW KIND OF BOISE HAWK

There’s actually one former Hawk on this entirely new adaptation of the team. The club is independent now, but manager Gary Van Tol did sign catcher Hidekel Gonzalez, who played parts of two seasons for Boise during his time in the Colorado Rockies organization, highlighted by a .272 average in 2017. He provides a sampling of what can happen in the Pioneer League. With the minor leagues being contracted from 162 affiliated teams to 120 this year, a lot of players were cut loose and ended up in independent leagues. Gonzalez is 24 years old now, past the desired age of a typical big league prospect, but he still has plenty of talent.

NIGHTHAWKS TO DEBUT AT NATIONALS

With the Great Northwest Athletic Conference championship in its pocket, Northwest Nazarene baseball moves on to the NCAA Division II Championships for the first time in program history. Not only that, the Nighthawks are hosting the West Regional Thursday through Saturday at Vail Field in Nampa. NNU opens Thursday afternoon against conference mate Western Oregon, with the winner advancing against top-seeded Azusa Pacific that evening and the loser going to the consolation bracket.

STEELIES ALUM IN SEARCH OF A STANLEY CUP

Former Idaho Steelheads goalie Jack Campbell is immersed in an old-school Stanley Cup Playoff series as he protects the net for the Toronto Maple Leafs against the Montreal Canadiens. And it doesn’t get much better than Tuesday night for Campbell. He notched his first playoff shutout, and he did it on the road in the Maple Leafs’ 4-0 victory over the Canadiens. Toronto now leads the first-round series three games-to-one. “All the credit in the world has to go to Jack Campbell,” teammate Morgan Rielly said following a 2-1 win in Game 3 after Campbell made 15 of his 27 saves in the third period. “He’s been there for us all year and tonight was no different. He’s an absolute stud.” Campbell has allowed just four goals and has a .965 save percentage through 12 periods in the series.

May 26, 1993: One of the great bloopers in sports history. Jose Canseco, playing rightfield for the Texas Rangers, misjudges a long fly ball by Cleveland’s Carlos Martinez—and it bounces off his head and over the fence for a home run. Three days later, Canseco would pitch in mop-up of a blowout loss in Boston and hurt his arm, having to undergo Tommy John surgery. Canseco would come back to play seven more seasons and would hit 462 steroid-aided homers in a 17-year big league career.

Broncos fall into the turnover trap in Logan