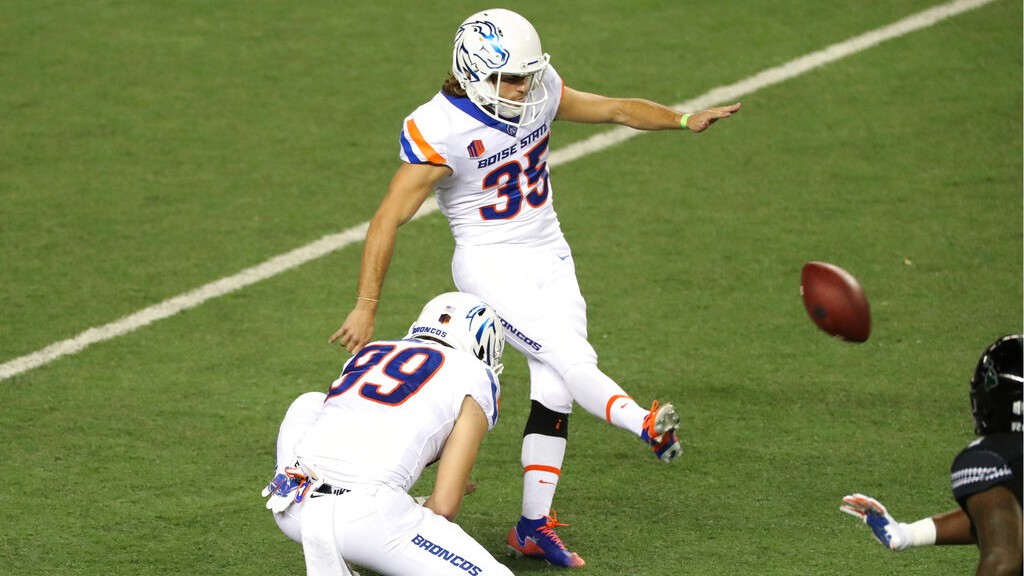 DraftKings has released its projected 2021 win totals for the FBS, and the over/under for Boise State is 9. What do you think? Coming off a disappointing season and sporting a new coach, and with UCF and BYU on the road and Oklahoma State and, dare I say, Nevada at home this season, that seems logical for the Broncos (unlike the ESPN Football Power Index that has them at No. 78). Boise State is tied for fifth among Group of 5 teams, trailing Cincinnati and Coastal Carolina (10), and UCF and Louisiana (9.5). More intrigue for the season opener in Orlando. So where is the Wolf Pack, you ask? Nevada is projected at 7.5 wins—as is defending Mountain West champion San Jose State. Then there’s Zach Wilson-less BYU at 6.5. And DraftKings predicts 7 wins for Auburn and Bryan Harsin.

Brandon Huffman, recruiting guru for 247 Sports, was on Idaho SportsTalk Tuesday to celebrate the opening of the recruiting floodgates. After a 15-month dead period, obviously unprecedented, campus visits and everything that goes with them are finally permitted again. “Our long national nightmare is over,” quipped Huffman. Football camps are crucial in recruiting, and they’re back, too. Boise State’s first youth camp starts next Monday, followed by the all-important high school team camps a week from Sunday. Huffman notes that teams generally have their recruits targeted for the 2022 class by now. Brandon sure knows better than I do, but I would say, there are so many players that coaches haven’t seen in person due to COVID, why wouldn’t the camps be a mega-showcase for some top senior prospects?

HANGIN’ ON TO HOUSER

Huffman is high on Andy Avalos’ staff. Even though Boise State has only one commit in the 2021 class, quarterback Katin Houser of Southern California power St. John Bosco, the Broncos have a slew of offers out to top targets. And Huffman says he knows of three or four four-star prospects who have the Broncos “in their top two or three.” He classifies Boise State as a school that carefully vets its prospects, and when the staff gets a commit, the level of interest in that guy around the country shoots up. Houser is an example, as his list of offers is into the teens. “Boise State is one of those schools that always finds themselves in this position,” said Huffman. As I mentioned Tuesday, now it’s a matter of keeping Houser. And make no mistake, it is iffy, as he is planning visits to Duke, North Carolina and Michigan State.

Boise State men’s basketball coach Leon Rice has his roster basically set for 2021-22. But at many schools around the Mountain West, you’re going to need a program to figure out who these guys are. Nevada is accustomed to transfers, and last week the Wolf Pack picked up a commitment from one of the top players remaining in the transfer portal, A.J. Bramah of Robert Morris. Bramah had first settled on Arizona State but decommitted from the Sun Devils about 10 days ago. UNLV’s roster has almost completely turned over, but the Rebels hope to have one very familiar name back. Stadium’s Jeff Goodman reported last Friday that UNLV star Bryce Hamilton has withdrawn from the transfer portal and will return to the Rebels—if he decides not to stay in the NBA Draft pool. Hamilton has not hired an agent.

FOUR TOUCHDOWNS AND A FIELD GOAL

Prepare to see some strange things in the Pioneer League this season. It seems like the Boise Hawks pitching staff has yielded a lot of runs in this young season, but how would you like to be Great Falls. The Voyagers lost to Ogden Monday 31-11. No typo. The Raptors rapped 29 hits and posted a 15-run fourth inning. Of course, this didn’t help: Great Falls committed a staggering nine errors as it fell to 0-9 on the season. The Voyagers have allowed 120 runs in those nine games. The Hawks, meanwhile, open a three-game series against the Missoula Paddleheads tonight at Memorial Stadium.

There was no more tread on College of Idaho’s tires Tuesday night, as the Coyotes softball team was eliminated from the NAIA World Series in a 9-0 loss to Southern Oregon in Columbus, GA. The Yotes won a school record 44 games against 19 losses this season and their third-place finish was their highest finish ever at nationals. The Northwest Nazarene baseball team opens play at the NCAA Division II World Series Saturday afternoon in Cary, NC. The Nighthawks’ reward for winning the NCAA West Regional is a matchup against the tournament’s No. 1 seed, Central Missouri, which is 43-6.

CAMPBELL: REPORTING THE BAD WITH THE GOOD

One week ago, we were signing the praises of former Idaho Steelheads goalie Jack Campbell. He had just posted his first Stanley Cup Playoffs shutout as Toronto went up three games-to-one on Montreal. Well, in a classic crash-and-burn, the Maple Leafs are out of the postseason after a 3-1 Game 7 loss to the Canadiens on Monday night. In Montreal’s three unthinkable wins, two of them in overtime, Campbell allowed nine goals on 83 shots. The two goals he yielded in Game 7 (the third was an empty-netter) were not egregious—one came on a turnover and the other on a power-play deflection—but they were goals nevertheless. And it happened on the Leafs’ home ice.

June 2, 2016, five years ago today: The biggest comeback in Seattle Mariners history, as the M’s rally from a 12-2 deficit in San Diego to beat the Padres by a field goal, 16-13. They scored a combined 14 runs in the sixth and seventh innings to do it. Nine of them came with two outs in the seventh, when the Mariners looped together seven straight singles. Three beleaguered San Diego hurlers threw 66 pitches in that inning alone.