It was a very cool 50th anniversary celebration for KBOI’s Paul J. Schneider yesterday. Cumulus general manager Don Morin announced that the station’s building at 15th & Bannock would be named the “Paul J. Schneider Building” effective immediately, and greeting employees and visitors to the facility first thing this morning was a sign and a rock monument declaring it as such.

Paul J.’s memories are the best. He specifically cited a 1996 Boise State football game, a nondescript one for those who don’t know the story. It was a 33-32 win at New Mexico State toward the end of a 2-10 season, the worst in school history. But you could hear the emotions flow as Paul J. talked about it. Bronco coach Pokey Allen was dying of cancer and had just been released by doctors to fulfill his dream of being a Division I-A coach. Boise State had lost nine games in a row without him, but a dramatic Tony Hilde-to-Ryan Ikebe touchdown pass in the final minute won it. And the tears flowed—on the sidelines and among radio listeners. Fitting that Paul J. would want to spotlight that game right alongside the 2007 Fiesta Bowl.

One of my favorite Paul J. moments from my two years working as his sidekick came in December of 1985 in basketball at Oregon State. Boise State was young—a year away from its breakout season—and not much was expected of Bobby Dye’s Broncos. The Beavers, under Ralph Miller, were still a Pac-10 power. Yet Boise State stayed with OSU in Gill Coliseum all the way to the final seconds. The game was tied as the clock counted down, and the Broncos had the ball. The Beavers collapsed on true freshman Chris Childs at the top of the key, and he fired a pass to a wide-open Roland Smith underneath the basket. And…”He missed the layup! He missed the layup! Oh my God…he missed the layup!” Paul J. always got into the game. That was part of his magic. (Oregon State won in overtime 60-58.)

The Eugene Emeralds salvaged the finale of their three-game set with the Boise Hawks last night, winning 4-1 in Memorial Stadium. Second baseman Bret Boswell was the only Hawk with a multi-hit game and had the team’s only extra-base hit, a double. The Emeralds’ Joe Martarano completed a successful homecoming in the city where he was once a Boise State Bronco, going 1-for-3 with an RBI single. The Hawks begin a three-game road series tonight at Salem-Keizer.

Who’d a thunk it at the beginning of the season? Kyle Schwarber, the former Boise Hawk who became part of World Series lore last fall, has been demoted to Triple-A Iowa by the Chicago Cubs. You need go no further than Schwarber’s batting average, an anemic .171. The season began with him batting leadoff for the Cubs. That only lasted 36 games, as he was unable to hit left-handed pitching—Schwarber is batting just .143 versus southpaws at this point. He hit .412 in the World Series last season after missing all but three games of the regular season with a serious knee injury. Schwarber was the fourth overall pick in the 2014 draft and began his pro career with the Hawks, going a torrid 12-for-20 with four home runs over the first five games before being promoted.

Nevada’s Cameron Oliver attended the NBA Draft last night in Brooklyn. But he wasn’t selected, and the Mountain West was shut out this year. Oliver has signed an undrafted free agent contract with Hoiuston. Five players who Boise State faced last season did go in the draft. Utah’s Kyle Kuzma was taken in the first round, 27th overall by Brooklyn. Three Oregon Ducks were picked in the second round—Jordan Bell by Chicago, Tyler Dorsey by Atlanta and Dillon Brooks by Houston. SMU’s Sterling Brown was also drafted in the second round, going to Philadelphia.

Mountain West representation has changed on the NCAA Division I Men’s Basketball Committee due to the recent retirement of embattled New Mexico athletic director Paul Krebs. MW commissioner Craig Thompson has been named to fill the spot, agreeing to a one-year transitional term. Eventually the conference will identify a permanent replacement (there are four years total remaining on the term). Thompson knows the ropes—he was a member of the committee from 1995-2000 and served as chair in 1999-2000. He’s also currently a member of the Men’s Basketball Oversight Committee and the Men’s Basketball Legislative Subcommittee.

Okay, Graham DeLaet and Troy Merritt. Let’s multiply this by four. The Boise State products each carded a five-under 65 yesterday to open the Travelers Championship in Cromwell, CT, and are tied for fourth, two shots behind first-round leader Jordan Spieth. The highlight of DeLaet’s day was an eagle on the par-5 sixth hole. Merritt started the day with birdies on four of his first seven holes. This is Merritt’s sixth entry in the Travelers, and he’s missed the cut four of the previous five times. He’s been struggling lately and really needs to capitalize on his opening round. DeLaet, on the other hand, has two top five finishes in this event—third in 2013 and fourth in 2015. He hasn’t played since the Memorial three weeks ago.

The 88th Idaho Men’s Amateur tees off today at Falcon Crest, which is hosting the tournament for the first time in eight years. Last year’s champion, Derek Bayley, and runnerup Graysen Huff are not back, as they qualified for and are competing in the British Amateur. But Notre Dame golfer Hunter Ostrom, who won US Open Local Qualfying last month, is in the field, as are Texas A&M’s Josh Gliege and a retro favorite, 1999 Men’s Amateur champ Bret Rupert. Two others to watch are brothers Skyler and Kavan Eubank, who just moved to Idaho. Skyler was recently the medalist at the US Junior qualifier at TimberStone and will begin his college career at Boise State this fall. Kavan is a teammate of Gliege’s at Texas A&M.

Nick Symmonds’ stellar track and field career likely came to an end last night at the USA Outdoor Championships in Sacrmaento. Symmonds, the Bishop Kelly grad and six-time national champion in the 800-meters, ran a 1:51.52 in his specialty and did not advance after finishing 32nd. Boise State’s Sadi Henderson was almost four seconds off her personal best last night, running a 2:06.08 and finishing 21st in the first round of the women’s 800 meters. Henderson’s stay at nationals is also over. Former Bronco Marisa Howard was impressive in the 3,000-meter steeplechase, though, clocking a 9:48.16 in the first round, good for sixth place and a ticket to the finals tomorrow. Boise State alum David Elliott runs in the 5,000-meter final tonight.

After 19 seasons, 424 victories, and an NAIA Division II national championship, Marty Holly announces his retirement as head basketball coach at Albertson College (now again the College of Idaho). Holly would remain as athletic director at the Caldwell school, and his longtime assistant Mark Owen, a former player for Holly, would succeed him as coach of the Coyotes. As AD, Holly built the C of I program into a model for small colleges everywhere. 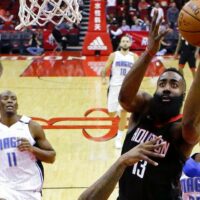 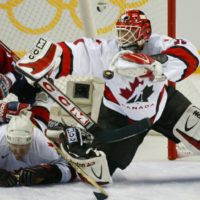 This Day In Sports: Canada’s gold in Canada’s game 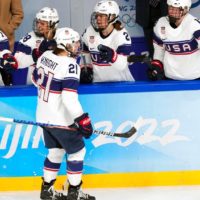 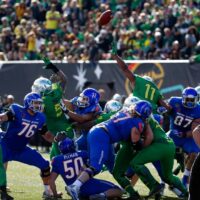