There’s been some great high school basketball over the years in the Treasure Valley, but only one local graduate has ever played in the Sweet 16. That would be former Bishop Kelly star Cory Violette,who helped get Gonzaga to that cherished round as a freshman in 2001 (the All-West Coast Conference forward went to the NCAA Tournament all four of his years with the Zags). Now, there are two Treasure Valley products in the Sweet 16. Both are in the same bracket, so they could play each other in the Elite Eight Sunday if they’re successful tonight. Gonzaga’s Kyle Dranginis out of Skyview High and Utah’s Isaiah Wright out of Borah High face UCLA and Duke, respectively. Only one way to look at it: local prep basketball is on its way up.

Dranginis and Wright are good friends and have been in contact with each other via text, according to Wright in an interview this week on Idaho SportsTalk. Dranginis, a junior, played 20 minutes in each of Gonzaga’s tournament wins last weekend—coach Mike Few likes him off the bench for his all-around game. He scored 11 points total, dishing out seven assists, pulling down six rebounds and making two steals. Chances of the Zags beating the Bruins are good. Wright, a true freshman, logged seven minutes in each of Utah’s first two NCAA wins. He’ll be remembered in the near-term for going 3-for-4 from the free throw line in the final 16 seconds to put away Stephen F. Austin. Chances of the Utes beating the Blue Devils are not good, but it’s compelling stuff. As Wright said on IST, “I’m just super-excited to get going against Duke.”

Speaking of the Utes, Tommy Connor, their associate head coach under Larry Krystkowiak, is the presumptive front-runner to succeed the retired Stew Morrill at Utah State. The Salt Lake Tribune reports that Connor has interviewed with USU athletic director Scott Barnes, but there is no offer yet. Nothing will likely happen until Utah finishes its NCAA Tournament run. Connor, son of former Boise State coach Bus Connor and a former Borah High standout, played at Utah and was head coach at Westminster College in Salt Lake City between stints as a Utes assistant. He’s become an influential figure in basketball in the state of Utah.

This is the way the D-League is supposed to work. Jack Cooley, the former Notre Dame standout, didn’t make the Utah Jazz Opening Night roster and began the season with the Idaho Stampede. Then he injured his thumb in the first half of the Stampede’s opener and didn’t get back on the floor with the club until January 9. It’s been all good since then, though. Woven into a Stampede season that has seen him average 16.8 points and 12.5 rebounds (and set a new D-League record with 29 boards two weeks ago) were two 10-day contracts with the Jazz. The second one is ending, and Utah has now signed Cooley to a multi-year deal. The Jazz have in turn reassigned forward Grant Jerrett to the Stampede.

The Stampede play their final two home games of the season tonight and tomorrow night against Sioux Falls. The series is draped in irony for outgoing Stampede managing investor Bill Ilett. It was against the Skyforce that the Stamps played their first game in franchise history in November, 1997, winning 102-92 in the Idaho Center. And it was the Sioux Falls organization after which Ilett modeled his development of the Stampede in the year leading up to the opener. Meanwhile, the Stampede are one defeat away from the club record for losses in a season. The Stamps, at 8-37, have tied the mark set in 1999-2000. Russ Bergman began the season as coach that year and was replaced by Rory White about halfway through the campaign. CBA teams played 56 games back then—Idaho was 19-37 that season.

Hawaii News Now reports that former Boise State safety Jeremy Ioane has a date set for his kidney transplant: May 5 in Salt Lake City. The donor is his twin sister, Jasmine, a former softball pitcher at Weber State. Despite being diagnosed with auto-immune disease in both kidneys in the summer of 2012, Ioane prospered with the Broncos during his sophomore and junior seasons. The ailment caused him major grief as a senior, though. He made an emotional cameo appearance on Senior Night last November and recorded his final career tackle—then was unable to play in the Fiesta Bowl.

Yes, Boise State has to replace a ton of production from quarterback Grant Hedrick and running back Jay Ajayi. But there’s an important opening at another Bronco position that can be make-or-break in close games. Kicker Dan Goodale wrapped up his four-year Boise State career by contributing a 36-yard field goal in the Fiesta Bowl. The Timberline High grad persevered after missing potential game-winning and season-changing field goals versus TCU as a freshman and at San Diego State as a junior to go 14-of-16 as a senior. That’s a significant role to fill.

Junior Tyler Rausa entered spring ball as the favorite to take over. Rausa has been biding his time. He transferred from Riverside City College in 2013 and redshirted—then scored his one and only collegiate point on a PAT in mop-up duty last November during the Broncos’ 63-14 win at Wyoming. His numbers in his one season at Riverside, 15-of-20 field goals and 52-of-53 extra points, were similar to Goodale’s with the Broncos. And Rausa is off to a good start in spring football. “Rausa was good today,” said coach Bryan Harsin after the first spring scrimmage. “It was great to get some field goal work in.”

We’ll find out this weekend if Idaho Steelheads goalie Olivier Roy is ready to shake off the rust after sitting out eight weeks with what was termed a “lower body injury.” Roy is active as the Steelheads wrap up their three-game series at Utah with two games this weekend—he hasn’t played since leaving the ice in a 4-1 loss at Ontario on January 31. It’s a dicey time to sit the Steelheads’ other netminder, Chris Rawlings, who is undefeated in seven starts since joining the team. Idaho, leading the ECHL Pacific Division by 10 points with six games to play, could conceivably clinch with two victories in West Valley City.

The wind at the TPC San Antonio course was a bugger yesterday as the Valero Texas Open got underway. Only 12 players broke par in the first round, and two of them were not former Boise State stars Troy Merritt and Graham DeLaet. Merritt has to feel fortunate to have carded a two-over 74—he’s tied for 32nd. DeLaet was not fortunate at all. He shot a shocking 10-over 82 in a round that went south quickly, with four bogeys and a double-bogey on the front nine. DeLaet capped it with a double on the 18th.

“We are definitely on a bumpy, wobbly, clackity roller coaster ride this season,” acknowledged Boise State men’s tennis coach Greg Patton after Wednesday’s 6-1 home loss to Stanford. “We are keeping our eyes on the prize at the end of the road (the Mountain West championship).” The Broncos try to claw back in a doubleheader tomorrow at the Appleton Center—a morning match against UC Santa Barbara and an evening tilt versus Eastern Washington.

There have been some bumps in the road in the transition to coach Cindy Ball in the Boise State women’s softball program. The Broncos have lost 10 straight games going into their Mountain West home-opening series against San Diego State this weekend at Dona Larsen Park. Included was a three-game sweep at the hands of San Jose State last weekend that saw Boise State outscored 27-1.

The second-longest winning streak in NBA history ends as the Miami Heat fall to the Chicago Bulls, 101-97. The Heat came within six victories of the L.A. Lakers’ record 33-game streak in 1971-72. LeBron James scored 26.9 points per game and Dwayne Wade 23.5 during Miami’s run, which had started February 1 and featured an average margin of victory of 11.3 points.

Appreciating the way things are?

O-linemen never get their due 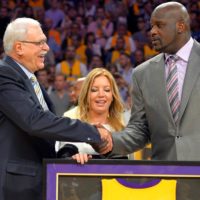