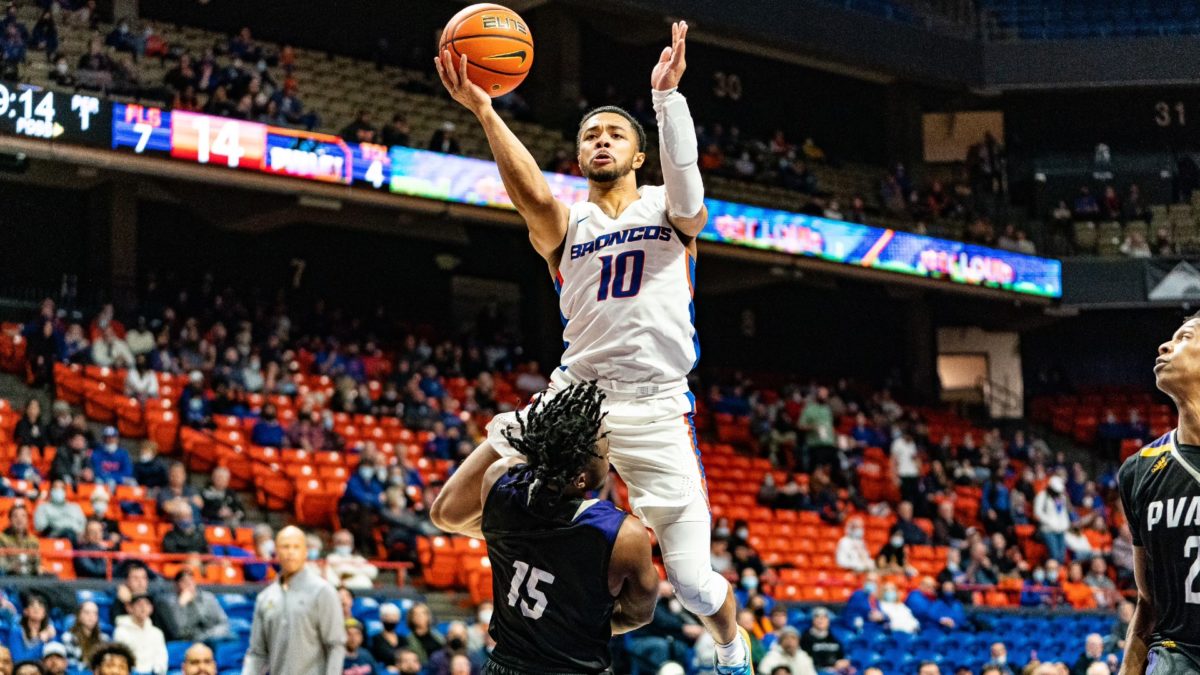 It’s hard to believe, but the Boise State Broncos haven’t played the Santa Clara Broncos in 32 years. The two sets of Broncos will finally meet again tonight in ExtraMile Arena in what I liken to a conference game. Santa Clara is an upper echelon West Coast Conference team, and the same can be said for Boise State in the Mountain West. Now we’ll see which Broncos guard can step up. Santa Clara junior Jalen Williams is the second-leading scorer in the WCC and 27th in the nation at 19.5 points per game. Marcus Shaver Jr. has his feet back under him after going scoreless Thanksgiving weekend against Cal State Bakersfield. That’s the only game he hasn’t been in double-figures all season. Shaver, who says his injured hand continues to improve, is coming off his first 20-point game of the season against Prairie View A&M.

FORMER YOTE ON THE BENCH

Scott Garson was lured away from his head coaching spot at College of Idaho 3½ years ago to join Herb Sendek’s staff at Santa Clara, and he’s been in the Silicon Valley ever since. Garson will return to the Treasure Valley tonight in ExtraMile Arena. He went 129-42 with the Coyotes, posting 30-win seasons twice and peaking with a trip to the NAIA Tournament semifinals in his final campaign. The Broncos he works with are 7-4 this season and have wins of 22 points over Nevada, 16 points over Stanford and 19 points over TCU. They lost by 12 at Cal on Saturday. It’s also hard to believe Boise State has never beaten Santa Clara, going 0-4 in the series.

From bench player 2½ weeks ago to Mountain West Men’s Freshman of the Week. That’s how Tyson Degenhart is rolling right now for Boise State. Degenhart earned the honor Monday after averaging 18.5 points, 6.0 rebounds and 2.5 steals in three starts last week. He shot 56.5 percent from the field and 70 percent from three-point range. Degenhart’s 21-point performance a week ago at Cal State Northridge was the first such game by a Broncos freshman on the road since Anthony Drmic did it 10 years ago.

JEANTY POISED TO MAKE IT OFFICIAL

Wednesday, of course, is early signing day, and ever since running back Ashton Jeanty of Frisco, TX, committed to Boise State back on September 13, we wondered if the Broncos could make it last three months. Well, if B.J. Rains’ interview with Jeanty Sunday on BroncoNationNews.com is any indication, the four-star recruit is going to sign on the blue-and-orange dotted line. “There were a few schools coming after me before but I told them I’m 100 percent Boise and I can’t wait to actually make it official,” Jeanty said. He added that he’s studied the Boise State legacy of Alexander Mattison, Jeremy McNichols, Jay Ajayi, Doug Martin and the like, and said he’s “hoping to be the next great running back to come through Boise.” Rains notes that Jeanty gained over 2,600 yards with 41 touchdowns this year.

CAPLES COMES UP IN CONVERSATION

Hank Bachmeier had a media session Monday, and teammate he mentioned deserves some ink. KTVB’s Will Hall noted that the Boise State quarterback considers Caples “to be a wide receiver that plays on Sundays.” The Broncos were loaded at the wideout spot this season, but when there was a sliver of opportunity, it was Caples who the staff called on—even as a punt returner when Khalil Shakir was nicked up. These might be the most deceiving stats on the Boise State sheet: Caples has four catches for 56 yards and one carry for nine yards. It would be nice to see the Arizona Bowl serve as a launching pad for Caples. Safe to say that Bachmeier would like to help. Looking ahead to 2022, we don’t know yet if Octavius Evans will be back. You could envision Caples and Stef Cobbs as the two feature pass-catchers.

Now that Idaho State is full speed ahead with new coach Charlie Dagle, the pressure is on for Idaho to get its hire done. And it appears to be close. FootballScoop.com reports that former Vandals star Joel Thomas and longtime FCS assistant Jason Eck are finalists to replace Paul Petrino. Interestingly enough, FootballScoop still has Montana wide receivers coach Brent Pease, the one-time Boise State offensive coordinator, as a finalist as well. Thomas, currently the running backs coach for the New Orleans Saints, was Idaho’s co-offensive coordinator under Nick Holt from 2004-05. Eck is the O-coordinator at South Dakota State, which is headed into an FCS Playoffs semifinal at Montana State this Saturday.

First we saw the L.A. Rams place cornerback Jaylen Ramsey on the reserve/COVID list Monday. That led us to hope former Boise State standout Donte Deayon could start for the Rams on Monday Night Football. Then Deayon ended up on the COVID list. In fact, there are former Broncos everywhere. Alexander Mattison of the Vikings and Cedrick Wilson of the Cowboys are in the same dreaded boat. Reports say that Mattison is unvaccinated and must sit out 10 days, so he’s out for next Monday night’s game in Chicago. There were a record 36 players added to the NFL’s COVID list on Monday.

December 14, 1995: Nevada plays in the first overtime game in Division I-A history, falling to Toledo in the Las Vegas Bowl, 40-37. Overtime was instituted at college football’s highest level for the 1995 bowl season, then became standard during the 1996 regular season. But it wasn’t the Wolf Pack’s first foray into overtime, which had been played at the lower levels since the late 1980s. In fact, two of Nevada’s games in the 1990 Division I-AA playoffs went three overtimes, including the classic in the semi-finals that ended in a 59-52 victory over Boise State.

The asterisk remains at quarterback