You think football was fun? Probably the low point of Boise State’s 2015-16 hoops season came a year ago at…Air Force. It was a 61-53 loss that saw the Broncos make just six baskets in the final 18 minutes of the game while shooting 27 percent. The undersized, theoretically less-athletic Falcons out-rebounded Boise State by six that day. It was the only time the Broncos faced the Academy last season—they never got another chance at ‘em. Tomorrow they meet Air Force again in Taco Bell Arena, trying to maintain at least a share of first place in the Mountain West. The Falcons are 3-8 in the conference and 10-14 overall, but that’s deceiving. They’re very difficult to defend with their deliberate style, back-cuts and Princetonisms. The Broncos will have to be patient and disciplined to avoid déjà vu.

This would be an appropriate time for Nick Duncan to break out of his 9-for-48 slump from three-point land. He will have his opportunities. Air Force packs itself in a zone and forces teams to shoot from beyond the arc—and shoot they do. In eight of the Falcons’ 11 conference games this season, opponents have jacked up at least 25 three-point attempts. Duncan was 0-for-3 from deep last year in Colorado Springs, but in three games against Air Force two seasons ago, he averaged 17 points and shot 15-for-28 from three-point range. Two of Duncan’s six career 20-point games have come versus the Falcons.

Gene Bleymaier turns 65 next year, and the transition to the next phase of his life appears to have begun. The former Boise State athletic director has stepped aside after almost five years in the same position at San Jose State to become a special advisor to president Mary Papazian “with responsibility for ensuring momentum and progress on development plans for our athletics facilities,” according to a news release issued by the university. The job of AD at San Jose State has to be a thankless one, as the program muddles through with the worst attendance in the Mountain West in the marquee sports—and little hope of Improvement, as the Spartans are buried at the bottom of the Bay Area sports scene.

Longtime San Jose Mercury News writer Jon Wilner had this analysis of the Bleymaier era at SJSU: “Bleymaier’s tenure was one of mixed success, at best, on high-profile matters.” Wilner’s take on men’s basketball: “He hired Dave Wojcik as basketball coach, which seems like a shrewd move—the Spartans are 12-10 in Wojcik’s fourth season and vastly more competitive than they were just a year ago.” (The campus is especially excited after San Jose State’s back-to-back wins over New Mexico and San Diego State.) Wilner’s opinion on football: “Bleymaier whiffed. His decision to hire football coach Ron Caragher after Mike MacIntyre left for Colorado was met with skepticism at the time and proved a miscalculation. The Spartans failed to produce a winning record in any of Caragher’s four seasons.”

Bleymaier spent nearly 30 years as athletic director at Boise State before being fired in August of 2011. That came on the heels of a “lack of institutional control” charge from the NCAA. But it didn’t diminish his accomplishments during his long tenure as a Bronco. In 1982, BSU was Division I-AA in football and was finishing its final basketball season in 3600-seat Bronco Gym. From there, Bleymaier saw the grand opening of what is now Taco Bell Arena, masterminded the installation of the blue turf in Bronco Stadium in 1986, and guided the Broncos through their move to Division I-A. He hired Pokey Allen, Houston Nutt, Dirk Koetter, Dan Hawkins and Chris Petersen and presided over Boise State’s rise to the top 10 ranks in college football, a Cinderella story that will not be repeated.

Are the Idaho Steelheads back on track after their six-game losing streak? We’ll know soon enough, as the Steelheads try to build on their 4-1 win over Wheeling Wednesday night with two more games against the Nailers this weekend. One player to watch for the Steelies is Joe Faust, who leads all ECHL defensemen with 12 goals this season. Faust needs one more tally to match Idaho’s single-season ECHL-era record for defensemen set 11 years ago. Tonight should mark the Steelheads debut of defenseman Aaron Harstad, acquired Wednesday from the Norfolk Admirals. The Steelies will also have forward Bryce Van Brabant on the ice, as he’s been signed after being released from his AHL tryout contract with the Texas Stars.

Troy Merritt was the outright leader for a time yesterday in the first round of the AT&T Pebble Beach Pro-Am on the windy and soggy Central California coast. But the former Boise State star bogeyed three of his last four holes and finished with a two-under 70, two shots off the clubhouse pace. Nampa’s Tyler Aldridge was one-over through 14 holes, as less than half of the 156 golfers were able to finish their rounds. Both Merritt and Aldridge played Spyglass, considered to be the toughest of the three courses in the tournament. But on this day it was an advantage, as Spyglass is more protected from the wind and rain than Monterey Peninsula or Pebble.

Back to hoops—it’s a big weekend in Caldwell for No. 25 College of Idaho. The Coyotes host 15th-ranked ranked Oregon Tech for a White-Out tonight and Southern Oregon for Basque Night tomorrow. More importantly, the Yotes are trying to climb past the two visitors in the Cascade Conference standings in their quest to earn a home game in the league tournament. NNU lost 83-68 last night at Seattle Pacific and goes to Saint Martin’s tomorrow night. And the Idaho Vandals got past Northern Colorado 88-76 last night, with Victor Sanders putting up another 25 points. UI is headed for North Dakota tomorrow night.

The Game of the Week on the West Coast this weekend happens to be in the West Coast Conference: No. 1 Gonzaga at No. 20 Saint Mary’s tomorrow in the cool hamlet of Moraga, CA. The Gaels’ roster may be packed with Australians, but there’s one Idahoan who has filtered in there. Stefan Gonzalez, a 2015 graduate of Highland High in Pocatello, is a sophomore guard at Saint Mary’s and is averaging 3.3 points per game off the bench.

There’s only one way to paint this: the Boise State women had better win tomorrow at Air Force. The Broncos, despite having lost six of their last nine games, are facing a Falcons team that is 3-18 and lost its last two games by a combined 49 points. Other campus notes: the Boise State men’s tennis team will be in its new home-away-from-home this weekend, the Eagle Tennis Club. The Broncos, struggling with a six-match losing streak in a rebuilding year, host Idaho State tomorrow morning, BYU tomorrow evening and Utah Sunday afternoon. The Boise State women host Portland today at the Boas Bubbles and Idaho State Sunday afternoon at the new ETC.

Buster Douglas stuns the boxing world when he wins the heavyweight title with a 10th-round knockout of Mike Tyson in Tokyo. Tyson, who had 33 knockouts in 37 victories and was a 42-1 favorite, floored Douglas in the eighth. But the challenger recovered to drop Iron Mike for the first time in his career. Douglas would lose the championship belt to Evander Holyfield eight months later in his only title defense. 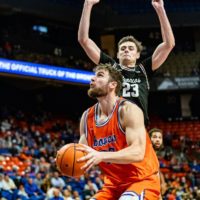 A big push from Armus 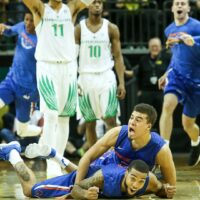 This Day In Sports: A legendary buzzer-beater beats the Ducks

The Broncos among the Group of 5’s group of five 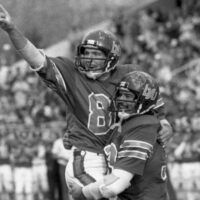 This Day In Sports: The Broncos-Wolf Pack rivalry revs up