The Albertsons Boise Open has always billed itself as a place to see the PGA Tour players of tomorrow. This week there’s a lot of today woven in. Among those PGA Tour pros who finished between Nos. 126 and 200 in the FedExCup standings are Stuart Appleby, D.A. Points, Rory Sabbatini, D.J. Trahan and Camilo Villegas. They’re all in the field at Hillcrest Country Club beginning Thursday. Again, a total of 50 PGA Tour cards will be awarded for the 2016-17 season after the Finals, although 25 of them have already been secured by the 25 leading money winners from the Web.com Tour’s regular season.

This is the best of all worlds for the 27th Albertsons Boise Open. It’s a move back to September after three toasty years in July. The tournament is also making its first appearance as a Web.com Tour Finals event, with its purse increasing to $1 million and the winner’s share jumping to $180,000. The Boise Open has been part of the Web.com Tour since it was born in 1990 as the Ben Hogan Tour—it’s one of only four original events remaining. The weather is shaping up to be classic Boise, with temperatures forecast in the upper 70’s (and over 80 Saturday).

How would you like to be Boise State defensive coordinator Andy Avalos, going into his second game in that role having to face Mike Leach’s renowned Washington State “Air Raid” offense? The Cougars kept jabbing at the Bronco defense Saturday night, as Luke Falk attempted 71 passes, but BSU avoided the haymaker. Wazzu accumulated 313 of its 520 yards after halftime and was closing in during the fourth quarter. There was no panic on Avalos’ part, though—no “oh, what the hey, let’s bring the house on a blitz.” He stayed the course, and it worked in the 31-28 victory. Red zone stats were a bit deceiving in the game. They show the Cougs going 2-of-3 in red zone chances (two touchdowns). But six other WSU drives ended up in Boise State territory without points, including two inside the 25-yard line.

One of the keys to beating Washington State Saturday night was that Boise State had “answers” on offense, at least through the first three quarters. Where would the Broncos be today without those? When Wazzu scored its first touchdown with 42 seconds left in the first half, the Broncos responded by driving 59 yards in five plays, getting a Tyler Rausa field goal to go up 17-7 at the intermission. Then at the end of the third quarter, when Luke Falk hit what could have been a demoralizing 50-yard touchdown pass to pull the Cougars within 10 points, Boise State answered with a 75-yard march in just four plays to go up 31-14. The Broncos could have used one more TD in the fourth quarter—if only to allow everyone to exhale.

One play does not a season make, but it certainly made Boise State cornerback Tyler Horton’s week. Horton’s rather electrifying 85-yard interception return for a touchdown on Washington State’s first possession Saturday has earned him Mountain West Defensive Player of the Week honors. The pick-six was the Broncos’ longest since Jamar Taylor’s 100-yarder against Brock Osweiler and Arizona State in the 2011 Las Vegas Bowl. Horton also made five tackles against the Cougars, three of them solo. It’s Boise State’s first conference honor on defense since October, 2014.

How does Oregon State rate? Oh yeah, the Beavers are in the Pac-12. Start time has been announced for the Boise State game at Reser Stadium a week from this Saturday, and it’s an afternoon game. Kickoff will be at 1:30 p.m. Mountain time, and it’ll be shown on a generally accessible network, Fox Sports 1. The Beavers had a bye last week after opening with a 30-23 loss at Minnesota. They host Idaho State this Saturday.

San Diego State got more run than Boise State did for its win over a Pac-12 school. Literally. In the Aztecs’ 45-40 win over Cal in Qualcomm Stadium Saturday night, Donnel Pumphrey was a beast, running for 281 yards and three touchdowns while breaking Marshall Faulk’s SDSU career rushing record (easy choice for Mountain West Offensive Player of the Week). The MW needed the Bronco and Aztec victories, as the other conference teams facing Power 5 schools all got whupped. The most surprising margin came in Utah State’s 45-7 loss at USC. Nevada made some amazing gaffes on the way to a 39-10 loss at Notre Dame, UNLV showed some life but fell 42-21 at UCLA, and Wyoming trailed 24-17 at the end of three quarters at Nebraska—and lost 52-17.

Not much has been said publicly about Jay Ajayi’s “non-injury deactivation” for Miami’s game in Seattle Sunday. But it sure sounds like the former Boise State star didn’t react well to the Week 1 depth chart that showed him behind Arian Foster at running back. According to the Miami Herald’s Barry Jackson, Dolphins coach Adam Gase is trying to let Ajayi turn the page. Now the Jay-Train needs to be on the same page as Gase. “(As far as where he) currently stands, we’re back to basically, he’s back in meetings, he’s back in the building,” said Gase yesterday. “We left him back. That was my decision. We’ve cleaned that up. We’ve moved past that. This is a new day for him today.”

The L.A. D-Fenders made it official yesterday, naming former Boise State and Idaho Stampede standout Coby Karl as their new head coach. The Lakers’ D-League affiliate hired the 33-year-old Karl after he began his coaching career as an assistant last season with the Westchester Knicks. He shares more than just coaching with his famous dad, George. Coby, like his father, is a cancer survivor, having been treated for thyroid cancer while a senior with the Broncos in 2007. It’s a big part of who he is today.

It was five years ago today that the NCAA handed down its sanctions on Boise State after charging the university with a “lack of institutional control.” The NCAA had found 18 major violations over five years in five sports. The most serious penalties fell on the women’s tennis program, which was found to have played an ineligible player and given her improper benefits. The football program was cited for arranging for incoming freshmen to stay with teammates during summer workouts before enrolling and was docked three scholarships per year for each of the three years of probation imposed on the school. The Broncos’ athletic program has survived and prospered after instituting a new compliance structure. And women’s tennis in particular has made an impressive recovery under coach Beck Roghaar.

A creative gimmick makes its debut at Bronco Stadium. One that has become a signature of one of the most-recognizable sports venues in the country. Boise State played its first game on blue turf, annihilating Division II Humboldt State, 74-0. The Broncos went on to their first losing season at 5-6, and it would be 11 years before the rest of the nation saw the blue turf on national TV in the 1997 Humanitarian Bowl. But now, after years of ESPN exposure, “the blue” has become a calling card for the university and the city. 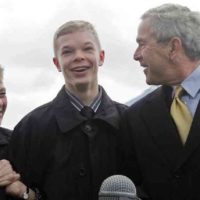 This Day In Sports: Not a dry eye at J-Mac’s school 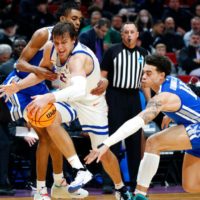 Scott Slant Wednesday Weekly: Next man up in the captain’s chair 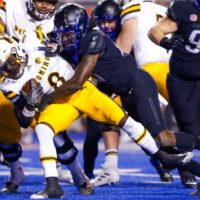