My weekly Friday early-bird celebration of Albertsons Stadium’s 50th anniversary ventures into the unforgettable 2006 campaign. The second game of the season brought Oregon State to town for a Thursday night ESPN matchup. The Broncos dominated the Beavers like they did two years before, winning 42-14. ut this one was the launching pad that led to history less than four months later. Wildfire smoke enveloped the blue turf, but Ian Johnson was unfazed, busting out with the best overall performance by a running back in Boise State history. After the Beavers rolled to a 14-0 lead (just like they did in 2004), Johnson broke a 59-yard touchdown run. OSU didn’t score again, and Johnson rolled up 240 yards and five TDs, tying a school record. And we all know how Ian finished that season in Glendale, Arizona.

LVE STILL ON THE MOUNTAINTOP

Leighton Vander Esch was a subject here yesterday, as the Boise State Football Facebook page replayed the 2017 Mountain West championship game for last night’s Bronco Throwback. What good timing this is. Vander Esch has been named to NFL.com’s 2020 All-Under 25 Team. Writes Marc Sessler: “Vander Esch struggled through a painful neck injury last season, but no doubt lingers over his ceiling when healthy. A force-of-nature Pro Bowl selection as a rookie in 2018, the Cowboys’ first-rounder piled up 140 tackles, two picks and six pass breakups. Two seasons ago feels like the early 1970s, but it’s a crime to forget Vander Esch and Jaylon Smith shrinking the field as sideline-to-sideline wizards. We’ll be reminded again come kickoff.” Hear, hear.

Mike Nolan, the one-time San Francisco 49ers coach, is the new Dallas defensive coordinator under Mike McCarthy. Word is that Nolan’s scheme will be a lot more aggressive, which should bode well for Vander Esch. If he’s healthy, of course. In an interview with KMVT-TV in Twin Falls last month, LVE said he’s “110 percent” after offseason neck surgery. The troublesome neck stinger cost him seven games last year, his second in the NFL after being picked 19th overall in the 2018 draft.

Dennis Dodd of CBSSports.com contends that “we may be reaching a tipping point for the Power Five to break away from the FBS.” Boise State is healthier than most Group of Five athletic programs, but the coronavirus crisis has pointed out how many are not as it wracks athletic departments. “Those 65 (Power Five) schools, including independent Notre Dame, already exist as separate entities—financially, competitively and even corporately,” writes Dodd. The gap between the haves and have-nots is widening at warp speed. The NCAA has been weakened to the point that it can’t stop the Power Five from doing what it wants to do. And Dodd says it could happen quickly.

When I first saw this, I thought another of Boise State’s old bowl games was going defunct (like the Poinsettia Bowl three years ago). But the Cactus Bowl will live on as the Cactus Bowl after two years as the Cheez-It Bowl. The Cheez-It name is moving to Florida to what has been the Camping World Bowl. The game stays in Phoenix at Chase Field. The Broncos played in the second-to-last Poinsettia Bowl in 2015, routing Northern Illinois 55-7. They lost in their one Cactus Bowl appearance a year later, a painful 31-12 defeat at the hands of Baylor.

Talia von Oelhoffen, one of the top girls basketball recruits in the nation, has committed to play at Oregon State. Yes, she’s the daughter of Kimo von Oelhoffen, who put together a 14-year NFL career, the longest of any player to come out of Boise State. Talia, rated a five-star recruit by ESPN, played high school ball at Chiawana High in Pasco, WA (her dad owns a restaurant and bar in the Tri-Cities). Talia jumped on the radar as a sophomore, when she averaged a staggering 30.1 points per game (plus 10.8 rebounds). Von Oelhoffen chose OSU over offers from Oklahoma, Stanford, UCLA and UConn. Coincidentally, you could say she fills a void left by the transfer of former Mountain View High star Destiny Slocum to Arkansas.

May 29, 1955, 65 years ago today: Arnold Palmer, the 1954 U.S. Amateur champion, wins his first money as a professional golfer, earning $145 for finishing in a tie for 25th place in the Fort Wayne Open. It would take Arnie 13 years, 2 months—and 52 victories—to pass $1 million dollars in earnings. Today’s top PGA Tour pros make that much money in their sleep. 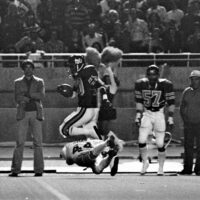