Friday means another chapter in my early-bird celebration of Albertsons Stadium’s 50th anniversary. In 2008, the most memorable home game was the last. Boise State needed to beat rival Fresno State to finish a perfect regular season. But it was Senior Night, so coach Chris Petersen trotted out Bush Hamdan as the first quarterback of the night (although Kellen Moore always gets credit for the start). On the first series of the game, the snakebitten Hamdan threw a pick-six, and Moore took over after that. It would be the Bulldogs’ only touchdown of the game, as the Broncos romped 61-10. It was also Ian Johnson’s final game on the blue turf, as the star running back completed a curious senior season. He rushed for 128 yards, his only 100-yard game of the year.

For the Bulldogs, it was more anguish against the Broncos. At that point, Fresno State fell to 1-7 versus Boise State in conference games. Coach Pat Hill’s team would lose to the Broncos 51-34 the following year and 51-0 in 2010. That’s a 112-10 point differential over two games on the blue turf. Boise State’s perfect season was spoiled five weeks later with a 17-16 loss to TCU in the Poinsettia Bowl (that defeat was memorably avenged in the 2010 Fiesta Bowl).

Magazine catch-up today: much-discussed already has been Street and Smith’s pick to win the Mountain Division of the Mountain West. Air Force over Boise State. We’ll get the litmus test soon enough, as the Broncos and Falcons are scheduled to meet in the second game of the season in Colorado Springs. B.J. Rains of the Idaho Press mentioned on Idaho SportsTalk that he had spoken with the author of the predictions, Mark Anderson of the Las Vegas Review-Journal. Anderson apparently pointed to the Falcons’ offensive line, which returns all five starters. That’s a big deal in the Air Force offense. Boise State has the better talent top-to-bottom. Can that win out over the Falcons’ triple-option moxie?

FOR THE JOB PROSPECTORS

There are good jobs and there are bad jobs. Adam Rittenberg at ESPN.com examines that from a Group of 5 perspective in his “College football coaching job tiers” analysis. “The ingredients that make a college football head coaching job appealing or alarming are even more pronounced at the Group of 5 level,” writes Rittenberg. “Some are better than lower-tier Power 5 gigs, while others rank below high-level FCS positions.” Rittenberg’s Tier I definition is: “Financial backing for coaches’ salaries and facilities projects; access to top recruits; consistent league title contenders that regularly target New Year’s Six bowls; history of wins against Power 5 (recent or long term); strong local or regional fan support; Power 5 expansion candidates.” Only four schools made that cut: Boise State, Cincinnati, Houston and UCF.

On the Broncos, Rittenberg writes: “Coaches know they can win at Boise State, which boasts 17 10-win seasons since 1999 and 13 Top 25 finishes. The school easily has the best facilities and support structure in the Mountain West.” Rittenberg divided Group of 5 coaching jobs into five tiers, and the rest of the Mountain West went like this: San Diego State in Tier II; Air Force, Colorado State, Fresno State and Wyoming in Tier III; Hawaii, Nevada, New Mexico, UNLV and Utah State in Tier IV, and ever-struggling San Jose State in Tier V. Interesting to note the BYU job is not in Tier I, but Tier II. “The big drawback is BYU’s independent status, which creates odd schedules and limited team goals,” notes Rittenberg. No argument here.

The three letters submitted to the NCAA asking it to bar the state of Idaho from hosting NCAA-sponsored events apparently aren’t going to be the tipping point in Boise State’s hopes of hanging onto the NCAA Tournament next March. Why? The NCAA is already pretty far down that road. “As we have previously stated, Idaho’s House Bill 500 and resulting law is harmful to transgender student-athletes and conflicts with the NCAA’s core values of inclusivity, respect and the equitable treatment of all individuals,” the NCAA said in a statement. “It is our clear expectation that all NCAA student-athletes will be welcomed, treated with respect, and have nondiscriminatory participation wherever they compete.” The NCAA Board of Governors is scheduled to discuss the legislation at its August meeting. This is not looking good.

TROY’S FIRST TOURNAMENT BACK IS A TOUGH GO

Troy Merritt said last week his game was “rounding into shape” when the coronavirus shutdown hit. The former Boise State star has been playing on forgiving courses in Idaho since. The rigmarole of Colonial Country Club in Fort Worth was a slap in the face Thursday, as Merritt shot a three-over 73 in the first round of the Charles Schwab Challenge. The front nine was uneventful, but he was saddled with three bogeys and a double-bogey after the turn. Merritt has a daunting amount of ground to make up if he’s going to play the weekend.

June 12, 2017: The Golden State Warriors complete the most remarkable playoff run in NBA history with a 129-120 win over the Cleveland Cavaliers to capture their second championship in three years. It was the third straight title series between the two teams, the first time that had ever happened in the NBA. The Warriors won four games to one—the loss was their only one of the postseason against 16 victories. The Finals MVP was Kevin Durant, who had joined Golden State from Oklahoma City as a free agent during the offseason in search of a championship. Durant outdueled Cavs superstar LeBron James by averaging more than 35 points per game.

The eyeball test at DeChevrieaux Field 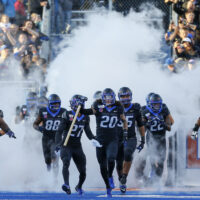