Friday’s feature: the 20th and final chapter in my 50th anniversary celebration of Albertsons Stadium. It was September of 2016, and Boise State finally nabbed its first win ever over Washington State, holding off the Cougars 31-28 in an ESPN2 game on the blue turf. The Broncos burst out to a 14-0 lead, with the first touchdown coming on an electrifying 85-yard interception return by Tyler Horton. From there, Boise State bent but didn’t break under the pressure of Mike Leach’s “Air Raid” offense. Brett Rypien, playing against the team he grew up rooting for (and his uncle Mark’s alma mater) for the first time, was picked off three times but threw for 299 yards in the victory. Boise State had gone into the game 0-4 against WSU. The Broncos would fall the following year in Pullman, 47-44 in triple-overtime.

Boise State and the Mountain West hope there’s a football season in the spring. The assumption is that there won’t be any non-conference games, so finding spots in future years to re-schedule the ones from this fall is dicey. The Broncos have announced that the scrapped matchup against Georgia Southern—the season opener that was supposed to be on the blue turf a week from Saturday—won’t happen until 2028. At least the Broncos don’t have to worry about playing back-to-back games against option offenses. The original schedule, of course, had Boise State traveling to Air Force the week after the opener against the Eagles. KTVB’s Jay Tust speculates that the Broncos are saving a spot for Florida State in 2024. “Just my opinion,” Tust tweeted. Okay by me.

ESPN.com analyzes the Preseason AP Poll released this week. Here’s a painful take from Bill Connelly, because Boise State can’t do anything about it without a season this fall: “With two AAC teams in the Top 25 and a third narrowly missing out, I’m honestly fascinated with what might happen if the fall season reaches completion and the AAC champ, be it Cincinnati (No. 13 among teams scheduled to play this fall), UCF (No. 14), Memphis (No. 17) or someone else, reaches the finish line unbeaten. The Power 5 is currently a Power 3, and the winner of the No. 4 league will likely be quite good. Good enough to get a College Football Playoff bid, perhaps?” Perish the thought. This year, anyway.

THROUGH A 52-YEAR-OLD LENSE

Chris Childs’ view on NBA walkouts over racial injustice is tempered by his 52 years on the planet, he suggests. But the former NBA guard who starred at Boise State remembers how he felt at their age. “They’re tired; they’re fed up,” Childs said Thursday on Idaho SportsTalk. “They look at these black young men being murdered, and they see themselves.” He would have approached it differently, though. “I think they should have waited ‘til the end of the season,” said Childs. “They have to look at the bigger picture. People who watch basketball—that’s their time to exhale and not worry about if I have a job tomorrow and if I can feed my family.” If Childs was in the Bubble, he said, “I would think about the 12th guy, the 13th guy on the team who’s making minimum (salary), who can’t afford to sit out.”

The scuttlebutt was true. Former Boise State star Justinian Jessup is headed Down Under after signing with the Illawarra Hawks of Australia’s National Basketball League. Jessup will be part of the NBL’s “Next Stars” program, created two years ago to “fast track future stars of the NBA.” LaMelo Ball, expected to be a top three pick in the NBA Draft in October, played for the Hawks in the Next Stars program last season. Said Jessup, “LaMelo playing last year was huge for the league and brought a lot of exposure (for the NBL) and I know it’s going to be tough competition which I’m really looking forward to.”

A NEW ‘HELGY’ IN TOWN

Even with the planned start of the season delayed until December, the Idaho Steelheads are still filling out their 2020-21 roster. Defenseman Kenton Helgesen has agreed to terms with the Steelheads after a four-game cameo with the team last season. Helgesen has played 120 career ECHL games, so coach Everett Sheen is confident he knows the drill. “Helgy was only with us a short time last season but made a great impression,” said Sheen. Every time I hear “Helgy” I think of former Boise State star and Bishop Kelly grad Erik Helgeson from 30 years ago—the only Bronco with more career sacks than Curtis Weaver (he had a whopping 54.5).

August 28, 1992: The Milwaukee Brewers pile up an American League record 31 hits in a 22-2 walloping of the Blue Jays at the SkyDome in Toronto. It was the most hits in a major league game in 91 years. Almost as amazing was the fact that 26 of the hits were singles. The Brewers hit only one home run, a two-run shot in the first inning from future Hall of Famer Paul Molitor. And the Blue Jays? They’d go on to win the World Series. 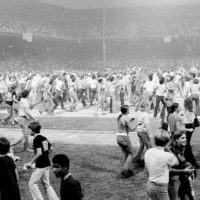 This Day In Sports: A different way of dissing disco

Say it ain’t so, Phil