Following up on the much-discussed subject of college football attendance in general and Boise State attendance in particular, the Broncos will have to work extra hard to maintain their success at the turnstiles this year. The average in Albertsons Stadium last season before the add-on of the Mountain West championship game was a conference-best 34,635, an outstanding number in this day and age. But that was aided by marquee home games against BYU, San Diego State, Fresno State and Utah State. There really isn’t a marquee game on the blue turf this year. Air Force? Wyoming? With that said, though, there is no atmosphere in the Mountain West that can touch the one at Boise State. And that isn’t going to change, despite late kickoffs, the home TV experience, and all the other challenges out there.

Coach Bryan Harsin responded to Dave Southorn’s Idaho Statesman story on Boise State being one of their rare schools around the country to show an increase in attendance last year with this tweet: “Great news but WE can do even better! Boise this is your team & these guys come here to play for you! We ALL want to Protect The Blue but we MUST have the BEST fans in the country with us every game! Be the difference & be the example of true home field advantage! GO BRONCOS!” We’ll see what new angles the university creates to put fans in the stands this fall.

TURNING TO QUENTIN AND WILL FOR THE WIN

The coolest thing on the green turf of Boise State’s Caven-Williams indoor facility Wednesday: St. Luke’s Children’s Hospital patients Quentin Robert and Will Gomersall scoring the “game-winning points” amidst the cheers of their Bronco “teammates.” The video went viral. Quentin, who has a seizure disorder, weaved his way through the defense for a touchdown on fourth-and-goal. And Will, who has cerebral palsy, added the winning two-point conversion, pushed into the end zone on his walker by Buster Bronco through a huge hole created by Boise State’s veteran offensive line. The team mobbed the duo. It was the culmination of the program’s “Bronco for a Day” event. Something special happens every year.

RICE STAYS WITH HIS DEEP ROSTER

B.J. Rains of the Idaho Press reports that Boise State coach Leon Rice was indeed in the mix for the open job at Washington State before ultimately deciding to stay in Boise. The Cougars settled on San Francisco’s Kyle Smith, who’s had a nice run with the Dons but doesn’t have Rice’s long-term track record. A conversation is one thing—an offer is another. Writes Theo Lawson of the Spokane Spokesman-Review: “Multiple reports indicated that Rice and Montana’s Travis DeCuire both declined offers from WSU before the Cougars reached out to Smith, but a source with direct knowledge of the situation said Smith was the only person who was offered the job.” Regardless, this is good news for Boise State. Rice deserves a chance to see this thing through with what he has coming back next season.

UNLV has settled on its new men’s basketball coach. The Rebels were able to land South Dakota State’s T.J. Otzelberger before a Power 5 conference did, because he seemed to be on that track. Otzelberger has gone 70-33 with the Jackrabbits the past three seasons, including two NCAA Tournament appearances. South Dakota State lost just two conference games over the past two seasons. Otzelberger will have to scotch-tape the roster together in Las Vegas. Since the firing of Marvin Menzies, five players have left the UNLV program: Shakur Juiston, Joel Ntambwe, Jonathan Tchamwa Tchatchoua, Cheickna Dembele and Mbacke Diong. Juiston is a significant loss after averaging 10.8 points and 8.8 rebounds this season. (It’s not too late for a few of them to come back on board.)

There’s no testing the waters this time. Sophomore Jalen McDaniels is leaving San Diego State to enter the NBA Draft. The 6-10 forward declared early a year ago before returning just hours before the deadline. McDaniels averaged 13.2 points and 7.9 rebounds over his 67-game career as an Aztec. He was remarkably consistent in four games against Boise State, with 15.8 points and 6.8 rebounds per game. Scouts like McDaniels’ length and his mid-range jumper, but they’d like him to put on some weight. He’s listed at just 195 pounds. And McDaniels is still dealing with two civil suits in his home state of Washington alleging he illicitly filmed two female classmates performing intimate acts. ESPN projects him as an early second-round pick.

Rapid City got out from under the Idaho Steelheads’ spell Wednesday night, beating them 5-3 in CenturyLink Arena. It wasn’t for lack of an offensive attack on the Steelheads’ part—they peppered the Rush with 48 shots on goal. But Rapid City goalie Adam Carlson handled it admirably, clocking 45 saves. Tulsa was idle Wednesday, so Idaho hangs on to its one-point lead in the ECHL Mountain Division.

After a record-setting day at the NCAA Swimming and Diving Championships last weekend, Boise State’s Abbey Sorenson has been named the 2019 Mountain West Swimmer of the Year. Sorenson swam three events in nationals in Austin, and in the 200-yard backstroke she set a new Bronco and Mountain West record with a time of 1:53.28, finishing 19th. It was her third appearance at the NCAA Championships. Sorenson’s award marks the Broncos’ third Swimmer of the Year honor in their eight years in the conference. And, despite missing the end of the season with a career-ending knee injury, Boise State star gymnast Shani Remme has been named a second-team All-American on beam.

March 28, 1992: One of the most famous shots in NCAA Tournament history sends Duke into its fifth consecutive Final Four. With the Blue Devils trailing Kentucky by one point in the final seconds of overtime, Christian Laettner took a long inbounds pass and buried a 15-foot turnaround buzzer-beating jumper to give Duke a 104-103 victory. Almost forgotten is the fact that Laettner was 10-of-10 from the field and 10-of-10 from the free throw line that day. The Blue Devils would go on to win their second straight national championship.

Roh-ing through a great senior year 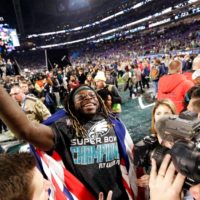 Boise State football: Back to Bach?