The most difficult thing local fans have to deal with in following Boise State distance-running superstar Allie Ostrander is the inability to see her. Beyond one cross country meet and a handful of indoor track and field meets, all people can do is read about her and search for highlights. If we’re lucky, we’ll get a glimpse of Ostrander on ESPN2 this afternoon as she begins defense of her national title in the 3,000-meter steeplechase at the NCAA Outdoor Track and Field Championships. She’ll run in the semifinal at about 5:30 our time. Will coach Corey Ihmels ask Allie to pace herself, since it’s a semifinal? He says that’s tough. “She’s got one speed, and it’s full-throttle all the way through,” said Ihmels yesterday on Idaho SportsTalk. “She doesn’t like to hear it sometimes, but she’s a good listener, so we’ll be okay.”

On Saturday night, Ostrander is set to run the 3,000-meter steeplechase final and the 5,000-meters just an hour and a half apart. Nobody has ever pulled that off—national championships in the 3,000 steeple and the 5,000 in the same night. “If anyone can do it, she can do it,” Ihmels said. Ostrander ran the same double a year ago in nationals at Hayward Field, finishing fourth in the 5,000 just after winning her national title in the steeplechase. One of the program-record five Bronco women in Eugene will be running in a final tonight—Clare O’Brien in the 10,000-meters. Alexis Fuller is in the 1,500-meter semi, while Sadie Henderson and Kristie Schoffield compete in the 800 semi.

Will Brett Rypien be wowing some unknown NFL team at OTAs a year from now? Chris Trapasso of CBSSports.com delves into the 2019 NFL Draft: “10 prospects to watch from Non-Power 5 conferences.” Boise State’s senior quarterback is one of the 10. “Having already appeared in 27 games for the Broncos, Rypien is an experienced signal-caller who’s not yet looked like an NFL franchise quarterback on a consistent basis, but has flashed outstanding anticipation and accuracy. He’ll carry a career 62.7 completion percentage, 60 touchdowns to 22 interceptions into his senior year in Boise.” Actually, that accuracy is a focal point. One other Mountain West player was on the list, Wyoming defensive end Curtis Granderson.

There’s a guy named Mike Wachsman in Delaware, OH, who’s a one-man college football Twitter gang. His handle is “CFB Focus,” and he constantly tweets facts and figures. Wachsman notes, “Two QBs enter 2018 with over 9,000 career passing yards and could crack the top 25 with 3,000-yard seasons. Louisville’s Chris Redman is 25th with 12,541 yards. On the verge are Boise State’s Brett Rypien (9,876) and Washington’s Jake Browning (9,104).” It would have been interesting to see those two face off in their first college football games. Browning’s was on the blue turf in the Huskies’ 16-13 loss to the Broncos in 2015. Boise State was still trying to redshirt Rypien that night—Ryan Finley was the starter.

ESPN’s Todd Archer reports that former Boise State star Leighton Vander Esch sat out yesterday’s Dallas OTA workout with a sprained ankle. “It’s not anything serious, but there was no need to make it worse through an OTA,” tweeted Archer. According to USA Today, Vander Esch had been in on the starting nickel defense each of the previous two weeks when the media was allowed in to observe practice. The Cowboys’ plan is still to start the No. 19 overall NFL Draft pick at middle linebacker this season.

Meanwhile, Pro Football Hall of Fame linebacker Brian Urlacher isn’t minding Vander Esch being compared to him. Their backgrounds are similar—Urlacher was from a small town before starring at New Mexico. “In college he was pretty good,” Urlacher told a Dallas TV station. “He played in the Mountain West. I played in the Mountain West as well. He played at Boise State and he’s similar to my (college) size, and he runs well so I think all the measurables are there for him.”

Troy Merritt plays his first PGA Tour event in three weeks when the FedEx St. Jude Classic tees off today in Memphis. He missed the cut at the St. Jude two of the past three years and tied for 68th in 2016. However, the 2014 tournament featured one of the best performances of Merritt’s career. That’s the week the former Boise State star knew he belonged, finishing second and pocketing $626,000. Hopefully he feels at home at TPC Southwind this year.

Sofia Huerta is no longer a tryout player. The Centennial High grad is more like a mainstay now on the U.S. Women’s National Soccer team as it prepares for a friendly tonight against China in Sandy, UT. The match at Rio Tinto Stadium will be shown on FoxSports1. Huerta’s performance over the next week (there’s another friendly versus China next Tuesday night in Cleveland) could set the table for the 2019 Women’s World Cup and the 2020 Summer Olympics in Tokyo, two events she told the Statesman are her “dream.”

Eagle High catcher Alex Guerrero was drafted in the 18th round of the MLB Draft by the New York Yankees Tuesday, and it didn’t take him long to decide he’d like to be in pinstripes. Guerrero had previously committed to the Washington Huskies but told KTIK he plans to sign with the Yankees. Guerrero played for the Utah Marshalls summer league team last summer and found that the almost 24 hour-a-day baseball lifestyle agreed with him. So Guerrero, who hit .330 for the Mustangs this season with three home runs and 30 RBIs, will bypass UW. Recruiting must be painful in college baseball. That’s one sport that keeps coaches wondering if their commits are really going to stick.

The Utah Jazz break the record for fewest points in an NBA game since the inception of the shot clock, losing 96-54 to Chicago in Game 3 of the NBA Finals. The Jazz undercut the mark of 55 points set earlier in the season by the Indiana Pacers. The Bulls’ 42-point margin of victory was the highest in NBA Finals history. Chicago, led by Michael Jordan, would go on to win the NBA championship in six games. 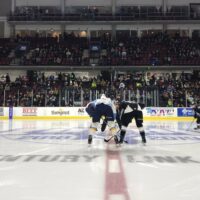 This Day In Sports: The birth of Boise’s hockey nation