The walk-on tradition at Boise State is a constant reinforcement to Broncos who come to play without scholarships. It’s a thing. Punter Quinn Skillin was just awarded a scholly, and running back Skyler Seibold preceded him. Last spring it was cornerback Avery Williams. The next could be tight end Garrett Collingham, the well-traveled (on the field, anyway) graduate of Mountain View High. Collingham walked on at Boise State as a quarterback in 2015, and has since played wide receiver, linebacker, and now tight end. It’s his current position that oozes opportunity, as coach Bryan Harsin was lukewarm at best on the performance of the tight ends at the Broncos’ first fall scrimmage Saturday night. Will Collingham’s junior year morph into a scholarship? Seems like it’s there for the taking.

Williams has taken it and run with it so far. Starting with his punt return for a touchdown in last season’s opener against Troy and continuing with his winning of a starter’s job at corner in October, Williams has embodied the work ethic that is the mark of a walk-on. If he maintains that mindset—and there’s no reason to think he won’t—he can use history as inspiration. Sure you can point to Leighton Vander Esch, who went from walk-on (and eight-man football) to first round pick in the NFL Draft. But Boise State can also tout the perserverance of two former Boise State standouts who were the equivalent of NFL walk-ons, going from undrafted free agent status to productive pro careers. Setting the example were Quintin Mikell and Chris Carr, who went on to experience two of the longest NFL careers ever by former Broncos.

Mikell was in the NFL for 11 seasons, eight of them with the Philadelphia Eagles. The 2002 WAC Defensive Player of the Year amassed 545 tackles, 11 interceptions, and a scoop-and-score fumble return. Mikell also played in Super Bowl 39 for Philly against New England. Carr played for four NFL teams over nine seasons after being signed by Oakland in 2005. He had 192 career tackles and seven interceptions, including a 100-yard pick-six of Pittsburgh’s Ben Roesthlisberger in 2006. Carr also averaged 24.5 yards on 256 kickoff returns and 7.3 yards on 148 punt returns during his career.

As for the aforementioned night the tight ends had in Saturday’s scrimmage, Harsin said, “I thought today was ‘okay.’ We had some penalties at that position we shouldn’t have. We need to get better.” Boise State his high hopes for John Bates, Chase Blakley, Matt Pistone, Tyneil Hopper and Cole Ramsmeyer, not to mention Collingham. Apparently they’re just hopes right now. “When you lose Jake Roh and Alec Dhaenens—there’s so much at that position we ask them to do,” said Harsin. “It takes longer for (tight ends) if you don’t have the experience of playing it for years.”

Curtis Weaver has not only been named by his teammates as the funniest player on the Boise State roster, he’s also been named to watch list for the Ted Hendricks Award that goes annually to the top defensive end in the nation. The latter recognition is the one that will go on his resume. The All-Mountain West sophomore led the Mountain West with 11 sacks last year—and the Broncos remind us of his “Piesman Trophy moment,” the 55-yard fumble return for a touchdown at Washington State last September that made him a candidate for the 2017 award. (The Piesman was created by SB Nation for “college linemen who do awesome, un-lineman things.” It didn’t exist when Boise State’s Mike Atkinson scored his fat-guy touchdown on a pick-six against BYU in 2012.)

The Albertsons Stadium poster boys this season are Brett Rypien, Jabril Frazier, Tyler Horton and David Moa. Installation of the large banners is underway in the traditional spot on the east wall of the stadium facing Broadway and should be complete by the end of the week. Rypien gets the “Discipline” banner, while Frazier is matched with “Conviction,” Horton with “Blue Collar,” and Moa with “Toughness.” All four are seniors, and three of them represent the defense.

Colorado State’s opener—a Mountain West game against Hawaii—is just 11 days away, and now the Rams wonder if coach Mike Bobo will be on the sideline. Bobo was admitted to a hospital after CSU’s first scrimmage of fall camp Saturday night due to numbness in his feet. He’s undergoing a battery of medical tests to determine the cause. Bobo, who had knee replacement surgery after spring football in April, has sometimes overseen practice from a golf cart this month. There’s no timetable for his return, and an interim coach has not been named. We wish Bobo a speedy recovery. He’s a good guy.

One of the benefits of watching minor league baseball games is seeing future major leaguers. Thing is, you’re never sure who they are (unless their names were Kris Bryant in 2013 and Kyle Schwarber in 2014 in Boise). Salem-Keizer brings in a good bet the next three nights in the form of catcher Joey Bart, the No. 2 overall pick in June’s MLB Draft by San Francisco. Bart is the Giants’ highest pick in 33 years, and he received a signing bonus of $7.025 million, the largest for a position player in draft history. He was ACC Player of the Year this spring as a junior at Georgia Tech. Bart comes in fairly tearing things up in the Northwest League—he’s batting .320 with nine home runs and 28 RBIs. Many have said Bart has the same future potential as current Giants catcher Buster Posey, who played for the Volcanoes in 2008.

Last night in Memorial Stadium, the Spokane Indians scored three times in the 10th inning to beat the Boise Hawks 6-3. It was the fifth straight series loss for the Hawks, who are now 6-12 in the second half of the season. And this note from the majors: deals are still being made as contenders position themselves for the stretch run. One over the weekend involved a former Boise Hawk, as Philadelphia picked up Justin Bour from Miami. Bour hit just .227 for the Marlins this season but clubbed 19 home runs and knocked in 54 runs. Philly plans to use him mainly as a pinch-hitter—and lo and behold, Bour made his debut for the Phillies Sunday with a pinch-hit single in a 9-3 loss at San Diego. He played for Boise in 2008, batting .258 with two homers and 27 RBIs in 48 games.

The New York Yankees retire the iconic No. 44 of Reggie Jackson. He played only five seasons with the Yankees (1977-81), but during that time he crafted his image as “Mr. October,” helping bring World Series championships to New York in 1977 and 1978. Jackson was also pivotal in the Oakland A’s three straight Series titles from 1972-74. He was at the heart of baseball’s free agency revolution in the 1970’s, as well as the sometimes chaotic Yankee clubhouse known as the “Bronx Zoo.” Jackson hit 563 career home runs, retired in 1988, and was inducted into the Baseball Hall of Fame in 1993. 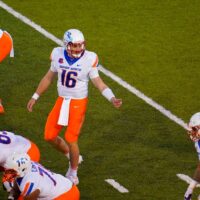 All that’s old is new again 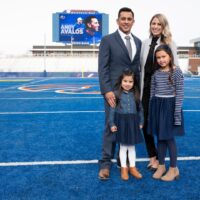