We have another red-letter day. Today is the official 50th anniversary of Boise State football. It was September 21, 1968, when the Broncos played their first game as a four-year program, falling to Linfield 17-7 in the old wooden Bronco Stadium that sat parallel to the Boise River overlapping the current site on which the blue turf resides. That it would begin with a loss to Linfield is ironic, because winning has become synonymous with football at Boise State. The Broncos would go 8-1 the rest of the way that year and have now recorded winning seasons 44 times in 50 tries. There have been 23 seasons of 10 wins or more (15 of them coming since 1999). The Broncos have been ranked as high as No. 2 in the country. Not even Lyle Smith ever envisioned that.

Think about the progression. From the NAIA to the Big Sky to the Big West, WAC and Mountain West. From Division II to I-AA to the FBS. From the Camellia Bowl win over Chico State to the Fiesta Bowl wins over Oklahoma, TCU and Arizona. There isn’t another story like it. While we commemorate the significance of this day, the university is going to zero in on 2020, which will be the 50th anniversary of Albertsons Stadium and NCAA membership. That will also be the 40th anniversary of the 1980 Division I-AA national championship. Should be festive.

The Boise State season is already a quarter of the way over, so here’s a first quarter checkup. The most striking position group on the stat sheet is wide receiver. The balance that we expected to materialize at that spot with Cedrick Wilson gone has come to fruition. Five wideouts have nine or more catches over the first three games, led by Sean Modster’s 17. Four of them, Modster, A.J. Richardson, John Hightower and Akilian Butler, have two touchdown grabs apiece. The fifth, CT Thomas, has one TD, but he’s the guy who led the Broncos at Oklahoma State with eight receptions. Modster, Richardson and Hightower are all averaging at least 16½ yards per catch. And by the end of this season, you can bet Khalil Shakir is going to be in the middle of this conversation.

One of the crucial tasks during a bye week is recruiting, and Boise State coaches have spread out over the West (plus Texas, I’m sure) to try to find the talent they need in advance of the Early Signing Day on December 19—less than three months away now. There could be a flurry of activity coming, because the Broncos have an unusually small list of commitments currently. There are only five players who have given verbals, although a couple of them are rated as high as Boise State can logically shoot. Quarterback Hank Bachmeier and “athlete” Casey Kline are four-stars. Still, this is a head-scratcher. The last new commit came down on August 29—offensive tackle Ben Dooley of Fallon, NV.

Boise State is one of five Mountain West teams with a bye this week. In fact, there are only six games involving MW teams—one of them a conference game, with Utah State trying to keep its roll going at home versus Air Force. Otherwise, it’s all about winning against fellow Group of 5 leagues. All three are tricky. This will be a tell-tale week for UNLV, who is a 5½-point underdog at Arkansas State of the Sun Belt. Nevada will try to extend the euphoria of last Saturday’s win over Oregon State, but the Wolf Pack is nearly a two-touchdown underdog at MAC power Toledo. San Diego State is a double-digit favorite at home against the MAC’s Eastern Michigan, but the Eagles do have that 20-19 win at Purdue two weeks ago on their resume.

As you may recall, Dan Hawkins cut his teeth at Boise State as special teams coach under Dirk Koetter. That’ll be a key facet of Idaho’s reintroduction to the Big Sky tomorrow, as the Vandals face Hawkins’ UC Davis Aggies on the road. Idaho goes in as the FCS national leader in net punting, a key field position stat, at 49.3 yards per boot. One reason: the Vandals are allowing minus-yardage on punt returns. The other: sophomore punter Cade Coffey is averaging 48.9 yards per punt, which would lead the FCS if he had enough attempts. The Vandals’ other special teams were big last week, too, after some struggles at Fresno State. They scored touchdowns versus Western New Mexico on a blocked field goal and a punt return.

Can College of Idaho escape this season-opening slide tomorrow? The early-season schedule has been tough for the 0-4 Coyotes, and tomorrow at Simplot Stadium they face Rocky Mountain College, ranked No. 14 in the NAIA. The Battlin’ Bears should be 3-1, but that was amended to 2-2 after they forfeited their opener due to use of an ineligible player. They do have the No. 1 defense in the Frontier Conference—that’s the primary challenge for the Yotes. Familiar names from Rocky Mountain are not restricted to former Treasure Valley high school stars. The Bears’ coach is Jason Petrino, a cousin of Louisville’s Bobby Petrino and Idaho’s Paul Petrino.

Not only will the PGA Tour begin wrapping up its season before football consumes America next year, the Web.com Tour will be, too. That means the 30th Albertsons Boise Open will be played in August for the first time—specifically August 22-25. The tournament will keep its spot in the Web.com Tour Finals, but it’ll be even more of a focal point for players now, as the series has been reduced from four events to three. The Albertsons Boise Open was played in September in 26 of its first 29 years. The exception was three dates in July, from 2013-15, before it was added as a Web.com Tour Finals event.

We have some great baseball weather goin’ on, and today marks a red letter day for Boise State’s new baseball program. With the inaugural season in 2020 still 17 months away, the Broncos will be holding their first practice. Coach Gary Van Tol already has 12 players eligible to swing a bat and put on a glove, including Kase Ogata, the former Rocky Mountain High standout, and South Korean Geon Hyoung Kim, who attended Timberline High. Van Tol named Hilton Richardson as his first assistant in July—then added Brock Huntzinger as pitching coach, Michael van Kampen as bullpen coach and Travis Buck as director of player development in August. 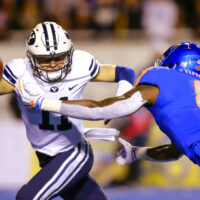