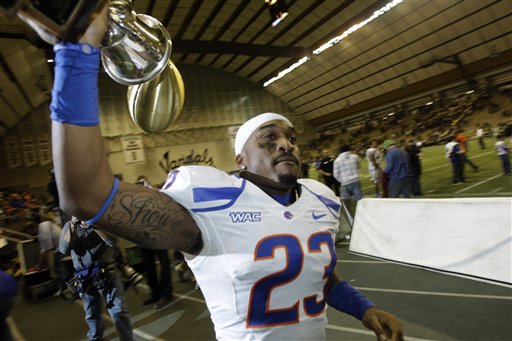 And there it was Wednesday afternoon. KTVB’s Jay Tust broke the news that former Boise State star Jeron Johnson will be joining Andy Avalos’ staff. Johnson was a demonstrative strong safety as a player, but he’ll be cornerbacks coach in his return to the blue turf. Johnson has a steely edge and embodies everything that made those the Broncos defenses elite from 2007-10. He was a hitter. (I still think Johnson was unjustly ejected in the 2008 Oregon game for the lick he laid on Ducks tight end Ed Dickson.) Johnson has two Fiesta Bowl rings (earning one of them as a redshirt) and a Super Bowl ring with the Seattle Seahawks. Let’s say he’ll have a lot of credibility with 18 to 22-year-olds. Tust added this stat: Johnson is the only Bronco since the turn of the century to log 80-plus tackles in three different seasons.

Now here’s a name we hadn’t heard before. Stacy Collins has been named Boise State special teams coordinator and STUDS coach by Andy Avalos. Collins comes from Utah State, where he served in a variety of positions over the last five seasons—in 2020 it was as co-defensive coordinator and secondary coach. But let’s zero in on 2019, when he coordinated the Aggies’ special teams. Collins had the All-Mountain West placekicker, Dominic Eberle, and the All-Mountain West kickoff returner, Savon Scarver. And Collins himself was named the conference’s Special Teams Coordinator of the Year by Mountain West Connection. Fair enough.

Consensus All-American Avery Williams is gone now, but Collins otherwise inherits a pretty good Boise State special teams cast. Jonah Dalmas, who came in as a walk-on, had an outstanding season as a true freshman, making seven of eight field goals. In the Mountain West championship game, Dalmas became the first Bronco in 22 years to kick two field goals of 50 yards-plus in the same game. Collins announced Wednesday that Joel Velazquez will be back in 2021. Velazquez will be a “super senior,” as he has elected to use the extra year of eligibility granted by the NCAA. He improved steadily this past season, adding almost two yards to his punting average. And 23 of his 31 kickoffs went for touchbacks.

BRONCOS AWAKEN DOWN THE STRETCH

For whatever reason, Boise State wasn’t ready to play off the bat Wednesday night. The Broncos missed their first 11 shots from the field and 13 of their first 15 as Fresno State built an eight-point lead in ExtraMile Arena. It ended up being the Broncos’ ugliest half of basketball this season—26 percent from the field and 1-for-14 from three-point range. Yet they only trailed the Bulldogs 30-28 at the break. The second half didn’t start much better, though, as Derrick Alston missed an alley-oop dunk in the first minute while Fresno State was draining back-to-back three-pointers to get up by eight again. An omen? Well, no.

The nightmare ended when the light switched on midway through the second half. Man, did it. The Broncos took their first lead of the game on an Alston layin with 9½ minutes left and finished the night on an incredible 30-5 run to win 73-51, their 13th victory in a row. The box score at the end looked almost normal. Alston scored 21 points, Marcus Shaver Jr. added 17, and Abu Kigab recovered from a 1-for-7 start to post a double-double with 15 points and 11 rebounds. And the defense dug in, holding the Bulldogs to just one field goal over the final 13 minutes of the game. Think about that.

If Boise State women’s coach Gordy Presnell is to notch his 700th career victory tonight, he’s going to earn it. It’s a rematch of the thrilling Mountain West tournament title game last March, as Fresno State comes in to challenge the four-time defending champion Broncos. Presnell, who’s in his 34th season as a head coach, collected his first 396 victories at Seattle Pacific from 1987-2005. The other 303 have been at Boise State. As for the Bulldogs, they’re one game behind the Broncos in the Mountain West standings, and they have the top two scorers in the conference in twins Haley and Hanna Cavinder. The Broncos’ Jade Loville is third, by the way.

Justinian Jessup is already making his mark two games into Australia’s National Basketball League season. Jessup put up 24 points for the Illawarra Hawks last Sunday, including a 4-for-4 performance from three-point land in a 92-76 win over the Cairns Taipans. The former Boise State star earned the“Money Ball of the Game” award the lights-out night. Jessup is Down Under as part of the NBL’s “Next Stars” program that helps develop NBA prospects. He was drafted in the second round of the NBA Draft by the Golden State Warriors in November.

MERRITT IN THE DESERT

One of the warm-and-fuzzy traditions of golf in the olden days was the Bob Hope Desert Classic. It just felt good to watch it in mid-winter. And until 2012, it was a 90-hole event. Now it’s a regular 72-hole tournament known as The American Express, and it tees off today at PGA West in La Quinta, CA. Former Boise State star Troy Merritt is in the field, coming off a a decent start to the 2021 portion of the PGA Tour season last week. Merritt finished in a tie for 56th at the Sony Open in Hawaii after coming in at par or under in all four rounds at Waialae Country Club.

January 21, 1990: At the Australian Open, John McEnroe becomes the first player in the Open era to be kicked out of a Grand Slam event for accumulating three behavioral code violations in one match. In his fourth round match against Sweden’s Mikael Pernfors—up two sets to one but trailing in the fourth—McEnroe was given a point penalty for “racquet abuse”, which handed Pernfors the game, a service break, and a 4-2 lead. McEnroe, who had an earlier violation for “lineswoman intimidation”, went ballistic, ranting until he was finally disqualified. 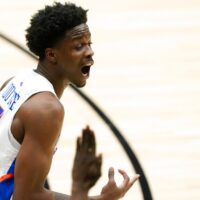