One year ago right now, George Holani was going through Boise State summer conditioning and player-run practices as a newly-arrived high school graduate from St. John Bosco in Bellflower, CA. Now, Holani is on the preseason watch list for the Doak Walker Award that goes to college football’s best running back. In between, Holani busted out with a stellar true freshman season, earning Mountain West Freshman of the Year honors and a second-team all-conference nod. He snuck over the 1,000-yard mark in the Las Vegas Bowl to extend the Broncos’ streak of thousand-yard rushers to 11 seasons, tops in the country. Holani also scored 10 rushing touchdowns. He added 26 receptions for 206 yards and three touchdowns, an underappreciated part of his game.

Jeff Caves has pulled some rabbits out of his hat in this, his final week as the host of Idaho SportsTalk on KTIK. Former Boise State coach and current Atlanta Falcons offensive coordinator Dirk Koetter has been a reasonably frequent guest IST, but he had never gone down the road he did Wednesday. Caves asked him about the surprise two-point conversion in overtime that carried Idaho to a 36-35 win over the Broncos in the final game of the 1998 season, the last time the Vandals beat the Broncos. Boise State had scored to take a 35-28 lead in the top of the first overtime. Idaho answered with a touchdown, and Koetter called a timeout to try to ice UI’s kicker. It made sense to Koetter, as Bronco Stadium was rocking with its first-ever crowd of 30,000.

According to Koetter, as the Vandals huddled on the opposite sidelined, one of Boise State assistants shouted, “They’re gonna go for two! They’re gonna go for two!” Koetter replied, “Aw, they’re not gonna go for two.” Then Idaho’s offense scrambled back onto the field. “My stomach was way up in my throat, because we have our block team out there.” Koetter said defensive lineman Jeff Copp later told him he was going to jump offside. “Why didn’t you?!” said Koetter. “That was a gutsy call by Chris Tormey, and a not-so-good timeout call by me.”

Caves also snagged an interview with Chris Petersen Wednesday, and the former Boise State and Washington coach was his old “Built For Life” self. The word “burnout” never came up, but it’s a thing with Coach Pete. He felt like he had plateaued at Boise State in 2013. “I really felt like: what’s the next thing for me to grow?” said Petersen. Then after six seasons at Washington, it was time for a break. “After awhile, if you don’t get rested and recharged properly, you’re not as good,” he said.

The pressures of FBS football are as acute as they’ve ever been. “It’s only getting worse, just because of the recruiting piece,” Petersen said. “It’s just never done. It is 24/7/365—I don’t care if you’re on vacation or whatever. It’s just never going to go away.” As for what’s next, Petersen is starting a collaboration with the UW business school. Odds are we’ll see him as a high-demand public speaker down the line. “There are so many things I want to share, and help people.”

C OF I FOOTBALL QUANDARY

Signs are pointing to a spring football season in the NAIA. College of Idaho coach Mike Moroski hopes it doesn’t go there. “I’m very apprehensive, to be honest with you,” Moroski told KTVB’s Jay Tust. “I just don’t think postponement solves all the issues. (But) the coronavirus is real. I’m not a scientist.” No doubt the Coyotes would like to get back on the field as soon as possible to build on the best season in school history. In 2019, the Yotes extended their school-record winning streak to 17 games and made it to the quarterfinals of the NAIA Playoffs, finishing 11-1.

MERRITT IN THE MEMORIAL

Troy Merritt remains one solid Sunday away from the top of the PGA Tour leaderboard. He gets a second chance on Jack Nicklaus’ Muirfield Village course this week as The Memorial tournament tees off this morning in Dublin, OH. In the Workday Charity Open on the same course last Sunday, Merritt started the day with a bogey on the first hole, setting the tone for an even-par 72 that dropped him from a tie for eighth to a tie for 22nd in that event. The good news: he logged a second straight top 25 finish and made $59,830.

July 16, 2013: Pitching the eighth instead of the ninth, legendary New York Yankee closer Mariano Rivera throws a perfect inning and earns MVP honors in the All-Star Game. It was the final All-Star appearance for baseball’s 43-year-old all-time saves leader as the American League blanked the National League, 3-0. In nine appearances in the Midsummer Classic, Rivera never allowed an earned run. He’d retire after the 2013 season.

The Coug monkey is off the Broncos’ backs

Pulling themselves up by the bootstraps 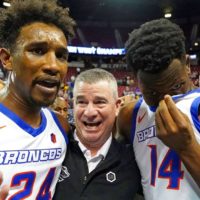 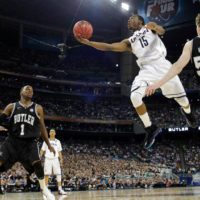