There was a preseason poll I talked about last week that ranked all 76 FBS teams still slated to play football this fall. On Monday, the Preseason AP Poll was released, and the AP is still counting everybody. Consequently, Boise State is third in line among those bubbling under the Top 25, effectively ranked 28th behind Memphis and Virginia Tech. The Broncos have appeared in the AP Top 25 at some point of the season in each of the past 18 years. But what will qualify them now? A half-and-half AP Poll over the next nine months, with the second half coming next spring? It is all so bizarre. Meanwhile, Memphis just missed, but the AAC’s other premiere teams both made it: Cincinnati at No. 21 and UCF No. 22. The Broncos were first in line among others receiving votes in the Coaches Poll a few weeks back.

It was surprising enough that Boise State’s Curtis Weaver lasted until the fifth round of the NFL Draft last spring. Now another blow. Four weeks into training camp, the reigning Mountain West Defensive Player of the Year has been designated as waived/injured by the Miami Dolphins. That means another NFL club can claim Weaver off waivers. If nobody does, he’d go on injured reserve and collect his rookie salary of $610,000, so all is not lost. Weaver injured his big toe in practice Saturday, a “season-long injury.”

It’s too bad, because Weaver was so prepared to prove the naysayers wrong with that fifth-round chip on his shoulder after once being projected as a first-round pick. He was one of the most popular and productive players in Broncos history, bursting on the scene with two sacks against Troy in his debut as a redshirt freshman in 2017. Weaver finished last December with the Mountain West record: 34 career sacks in just three seasons. Notes Michael David Smith of NBCSports.com: “Players who are waived/injured are rarely claimed on waivers, because teams don’t want to take on the salary to pay a player who’s hurt and can’t play. But Weaver could be a rare exception. As a fifth-round draft pick who’s only 22 years old, some team might be willing to take him on this year so they can have him next year.”

Dan Muzitani of the St. Paul Pioneer Press reports that former Boise State star Ezra Cleveland will begin his NFL career as a backup in Minnesota. “Cleveland was drafted as the presumed heir apparent to veteran left tackle Riley Reiff,” writes Muzitani. “In a perfect world for the Vikings, the next decade would feature Cleveland and right tackle Brian O’Neill as the bookends of the offensive line. But a few weeks into training camp, Cleveland is getting reps exclusively at left guard, as a backup to Dakota Dozier and Aviante Collins nonetheless.” Coach Mike Zimmer is in the second-round pick’s corner, albeit with a yeah-but. “He seems to be understanding the scheme,” Zimmer said of Cleveland. “He’s athletic and has some toughness, and I think he’s got some smarts. He does have to improve his technique.”

YES, MCCOLLUM DOES HAVE A TINY LOCAL TIE

So what’s this you hear about the Portland Trail Blazer’s C.J. McCollum being a former Idaho Stampede player? Well, he is, in a cup-of-coffee kind of way. The 2013 NBA lottery pick made his professional debut for the Stampede the first weekend of 2014 while essentially on a rehab assignment from Portland. McCollum had fractured his left foot in training camp in October. He appeared in two games for the Stamps and scored 37 points in just 41 minutes; then he returned to the Blazers. Those were the only two games McCollum ever played in what is now the G-League. He’s now Portland’s second-best player behind Damian Lillard, having averaged more than 20 points per game in each of the past four seasons. McCollum’s been playing in the NBA Bubble with a fracture in his lower back.

After his 61-point game two weeks ago, Lillard gave a shout-out to Phil Beckner, his personal hoops trainer of sorts. Beckner was an assistant under Boise State coach Leon Rice for two seasons, and Broncos players were beneficiaries in two consecutive summers when Lillard came to Boise to work with Beckner. Lillard, in turn, worked with Chandler Hutchison on his game just before his junior and senior seasons. Beckner was on the Weber State staff during Lillard’s four years with the Wildcats. Lillard, incidentally, left the Blazers’ 135-115 thumping of the Lakers Monday night inn the third quarter with a knee injury. Portland trails three games-to-one, with Game 5 set for Wednesday night.

This Day In Sports…brought to you by SUPERIOR POOLS OF IDAHO…pool care you can count on!

August 25, 1985, 35 years ago today: Dwight Gooden makes baseball history, becoming the youngest major league pitcher to win 20 games in a season. Gooden and the New York Mets beat the San Diego Padres 9-3 at Shea Stadium, improving his record to 20-3 at the age of 20 years, 9 months and 9 days—nearly a month younger than the previous record holder, the legendary Bob Feller. Gooden finished the season at 24-4 and led the majors with a 1.53 ERA on his way to the National League Cy Young Award. It would be the only 20-win season of Gooden’s 16-year big league career. 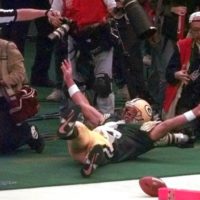 This Day In Sports: Favre re-ups with the green and gold