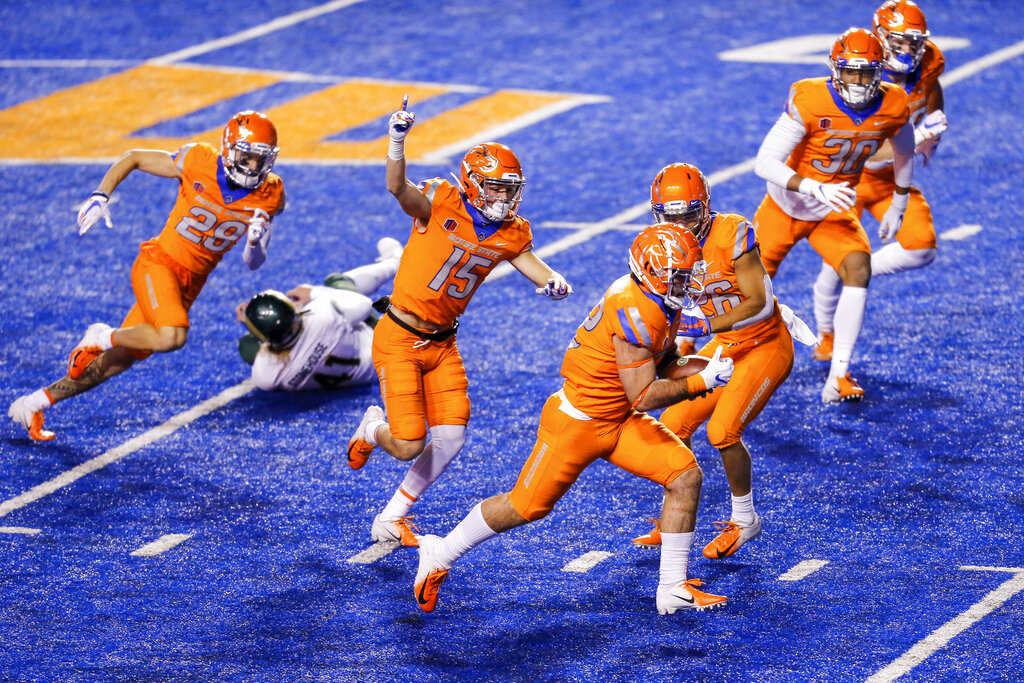 The Boise State football team is at a critical juncture. Not in the race for the Mountain West championship, but in simply playing games one week to the next. Except for the lucky 1,100 the past two weeks in Albertsons Stadium, Broncos fans have been yanked out of their fall routine. But that’s nothing compared to what the Broncos themselves are going through. They beat Colorado State 52-21 last Thursday despite being perilously close to the minimum number of players required on the offensive and defensive lines. One O-lineman, Ben Dooley, played both ways, something you rarely (if ever) see at the FBS level. Boise State has until Friday to see if it can overcome a combination of COVID-19 and injuries to put enough players on the plane across the Pacific to Honolulu. Be thankful for the four games you’ve seen.

There were 14 Boise State players out last Thursday night due to COVID-19 protocols, with nine of them testing positive. This is why the NCAA gave everyone a mulligan this year, granting players an extra year of eligibility. The Broncos are halfway through their eight-game regular season, and it’s beginning to look like they’ll be fortunate to see it through to the finish line. There were 15 games canceled this past week affecting eight of the 10 FBS conferences. Three games have already been canceled this week. Every day’s an adventure.

OPERATING WITH WHAT YOU HAVE

Boise State gained only 291 yards of total offense against Colorado State, but look at the hand it was dealt. Running back George Holani missed another game, and his absence has left a huge hole in the offense’s effectiveness. The Broncos were without Octavius Evans at wide receiver and John Bates at tight end (save for a handful of plays). There were more than that at the skill positions, of course. But the Broncos offensive line can only be described as patchwork right now. There were four new starters this season to begin with, and one of them, Kekani Holomalia-Gonzalez, was on the inactive list. Then the only returnee, John Ojukwu, hobbled off the field early in the second quarter versus CSU. Quarterback Hank Bachmeier was a saving grace. But no wonder he was sacked three times and hit eight.

There were also four starting spots to fill on the Boise State defensive line going into the season, but depth was supposed to overcome that. Now there’s no depth. Nowhere was that more apparent in the Colorado State game than at nose tackle. Scale Igiehon remained on the sidelines, and Keeghan Freeborn and highly-touted true freshman Herbert Gums were lost to season-ending injuries in practice last week. Divine Obichere is all the Broncos have left. (Obichere had five tackles against the Rams, including one for loss.) So all things considered, holding CSU to 321 total yards was a gutty accomplishment. Riley Whimpey put up a career-high 14 tackles and helped the defense produce three-and-outs three times less than four minutes into the game.

When I read that Fresno State running back Ronnie Rivers tied a school record for career touchdowns in the Bulldogs 35-16 win at Utah State with his 44th, I did a double-take. Forty-four? It does make you appreciate what Boise State has done this century. Brock Forsey 68 career touchdowns. Ian Johnson 58. Jay Ajayi and Jeremy McNichols 55 (both doing it in three years). Doug Martin 48. A legacy there, methinks.

Here are the Mountain West essentials after Week 4. San Jose State is 4-0 for the first time in 65 years after dominating UNLV 34-17. The Spartans are scheduled to be on the blue turf on Thanksgiving weekend. Nevada is the conference’s other 4-0 team after getting by New Mexico 27-20, but its opponents are a combined 1-13 this season. If you scroll down into the “others receiving votes” list in the AP Poll, Boise State is still a long way from getting back into the Top 25, but the Broncos are slightly ahead of the Wolf Pack and SJSU.They have six points to five for the Spartans and three for the Pack. One other note from the Utah State game: it was the last for quarterback Jason Shelley. The Aggies dismissed the Utah transfer Sunday for a violation of team rules.

There has never been a basketball schedule like the one Northwest Nazarene will play this winter The Great Northwest Athletic Conference plans to move forward with a modified conference-only slate beginning no earlier than January 7, and it includes just four teams: NNU, Alaska Fairbanks, Saint Martin’s and Seattle Pacific. The other six GNAC schools have opted out of the league season. Similar to the Mountain West, teams will play games on consecutive days against the same opponent in the same location, with games played on Fridays and Saturdays (the MW will have one off-day in between games). Schedules are expected to be finalized in the next two weeks.

The Cascade Conference has now postponed its start date to January 8 and is also planning to play two-game sets in the same location. College of Idaho notes that the state’s move back to Stage 2 of COVID-19 restrictions will wipe out all November events, including the Coyotes’ women’s basketball game set for November 25 against Boise State in ExtraMile Arena. The C of I men’s Taco Bell Shootout is also a casualty.

November 16, 2015, five years ago today: For the second time, a former Boise Hawk is named National League Rookie of the Year. Kris Bryant, the Chicago Cubs third baseman who played in Boise in the summer of 2013, was the unanimous selection after hitting .275 with 26 home runs and 99 runs batted in. Bryant helped lead the Cubs into the postseason for the first time in seven years, and he would be MVP the following season as the team won its first World Series title since 1908. Former Hawk Dontrelle Willis won the NL rookie award with the Florida Marlins in 2003.