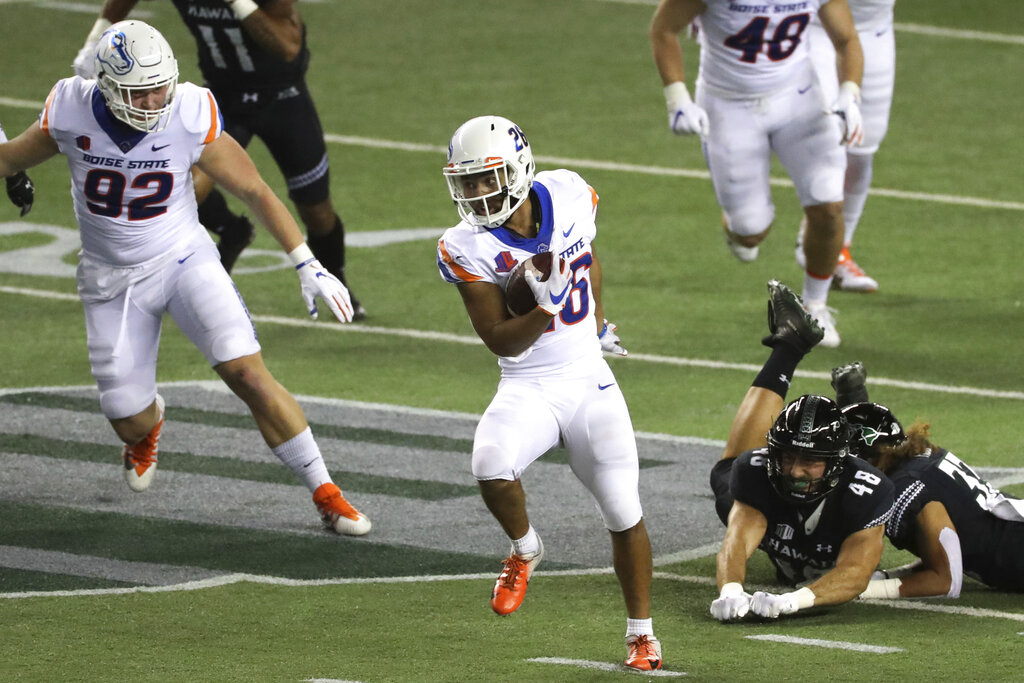 Avery Williams was a game-changer again on Saturday night. Hawaii had just pulled to within 10 points of Boise State on its opening possession of the second half, an 87-yard drive that would foretell the difficulties the Broncos would have the rest of the game. But Williams returned the ensuing kickoff 99 yards for a score to regain some momentum. It was his third special teams touchdown in four weeks. Williams also set up TDs with punt returns of 34 and 36 yards. The Broncos may have been in trouble without his heroics, but they held on for a 40-32 win to stay unbeaten in the Mountain West. The guy is money.

Did anyone think Williams’ first touch as a Boise State Bronco would be such a huge omen? Williams, then a redshirt freshman, took a punt return 81 yards to the house in the season opener against Troy in 2017. Originally a walk-on, he had been placed on scholarship just a month earlier. Since then, Williams has scored four other touchdowns on punt runbacks and three on kickoff returns—eight total career TDs on returns, the most among active players in the country. My KTVB colleague Jay Tust compiled a list of every FBS player with five-plus career punt return TDs and three-plus career kickoff return TDs over the last 20 years. Williams is the only one on it.

It was the ol’ tale of two halves for the Boise State defense at Hawaii. The Broncos ended the first half by forcing five three-and-outs (if you include the “roughing” the kicker penalty on the final possession). But the Rainbow Warriors racked up 275 yards and 29 points in the second half. Boise State looked like it was running on Waikiki sand as UH blew by, perhaps running out of gas in the humid air of Halawa. There were inexplicable missed tackles after halftime. Not to be making excuses, but flying to Hawaii a day later than usual, causing a Friday evening arrival and no walk-through time at Aloha Stadium may have worn on the Broncos. Jet lag, perhaps?

This was not CBS Sports Network’s best telecast. After a 36-yard Williams punt return to the Hawaii 26-yard line in the third quarter, the network took a TV timeout. But apparently there was none, and viewers missed an entire Boise State TD drive. Andrew Van Buren covered all 26 yards on three carries, the last one an 11-yard score. Van Buren logged his first collegiate 100-yard game, rushing for 113 on 27 carries. He averaged 4.2 yards per tote. But his longest gain was 13 yards. The Broncos miss George Holani. How sustainable is their Mountain West winning streak, which has now reached 13 games, without him?

ON THE BIG FOX

If someone had told you this summer that the biggest game of the Mountain West season would take place on Thanksgiving weekend, well, okay. And that it would be San Jose State at Boise State, well, what? That’s what we’ve got this Saturday afternoon, as the unbeaten Spartans challenge the Broncos, who are 4-0 in conference. And a combination of piqued intrigue and national COVID-19 cancellations has landed it on Fox, making it the first regular-season Boise State home game to air on one of the primary national networks since the 37-24 win over Oregon State on ABC in 2010. That’s the day ESPN College GameDay visited the blue turf. Minimal crowd this time as opposed to the wild sold-out throng 10 years ago, but the Broncos will take it. The new Mountain West TV contract gets lucky again.

Nevada SportsNet’s Chris Murray billed Saturday’s San Diego State-Nevada game as “the biggest game at Mackay Stadium since Fresno State in 2014 (at minimum) or Boise State in 2010 (at maximum).” It did not disappoint, as the Wolf Pack used a goal-line stand at the end of the game to beat the Aztecs 26-21 on CBS. The Pack is 5-0 for the first time in 10 years. That’s one of the Mountain West’s compelling stories. A less compelling one: this Friday’s San Diego State-Fresno State game has been canceled. That’s two weeks in a row that COVID-19 tracing has sidelined the Bulldogs. Elsewhere, perish the thought, this Saturday’s Apple Cup between Washington and Washington State has already been wiped out by WSU coronavirus concerns.

The sports calendar has been turned inside out in 2020. It feels like early October right now in terms of where the football season should be. But in a typical year, college basketball would already be underway. Nevertheless, the Boise State season has snuck up on us—and this Friday night we suddenly find the Broncos opening at 17th-ranked Houston. Yes, it was originally supposed to be in a tournament that included Gonzaga, Michigan State, Auburn and Xavier. Then it was going to be Kansas on national TV. But Boise State has to be happy with this opportunity. Just like everything else right now, let’s hope it happens.

A YOTE IN CINCY?

We’ll have to keep our eyes on the Cincinnati Reds in spring training, because a former College of Idaho standout is one step closer to making the majors. Former Coyotes pitcher Riley O’Brien has been added to the Cincinnati Reds 40-man roster to protect him from the upcoming Rule 5 Draft. The 2017 All-NAIA West selection was traded from Tampa Bay to the Reds in August. O’Brien posted a combined 9-7 record with a 2.40 ERA in two seasons with the Yotes and holds the school for lowest opponents’ batting average in a career at .206. He becomes the first C of I player to be on a 40-man roster since Jason Simontacchi pitched for the Washington Nationals in 2007. Simontacchi remains the lone Coyote to ever play in the big leagues.

November 23, 2007: Proclaimed as the biggest game in WAC history and the most significant sporting event ever in the state of Hawaii, the Hawaii Warriors and Boise State Broncos square off in a winner-take-all game for the outright WAC championship and a possible BCS bowl berth. Urged on by a sell-out crowd of almost 50,000 in Aloha Stadium, Hawaii star quarterback Colt Brennan dealt the Boise State defense a number of body blows before the Warriors pulled away to win 39-27. Brennan ended up with 495 yards and five touchdowns through the air as Hawaii ended the Broncos’ run of five straight WAC titles.