What a bummer of a way it was to start the 4th of July weekend. One of the coolest things to happen in Boise State sports in 2020 was baseball’s Opening Night at Memorial Stadium at the end of February. That’s now a footnote in history after Thursday’s gut-wrenching announcement the Broncos baseball program has been eliminated, along with women’s swimming and diving. Now that one of the nation’s strongest Group of 5 athletic programs has made this painful move, I’d expect dominos to fall at other schools. They’ll see it as “okay” now. Ferd Lewis of the Honolulu Star-Advertiser took note of that in his Sunday column. “To date Hawaii has avoided the last resort of team cuts,” wrote Lewis. “But as the Mountain West was reminded on Thursday, if they can come in Boise, they can happen anywhere.”

The two sports are not going down without a fight, as both have GoFundMe campaigns going. Pitcher Gavin Gorrell started one right after the news was announced, only to be told that no amount of fundraising could save the programs. So he backed off—until Amaia Van Tol, the daughter of coach Gary Van Tol, started her own. And Gorrell was right back on board, posting an impassioned video to social media. He made a pitch for donations and edited together nine player soundbites that said, “Let us play.” The video ended with coach Van Tol, said, “The time is now to rise up and fight another opportunity to play. Go Broncos.”

The swimmers and divers should not receive short shrift in this pit-in-the-stomach development. The Broncos team was born in 2007 and had a WAC championship by its fourth season. In 13 years, Boise State collected two WAC championships and four Mountain West titles, the most recent one coming two years ago. KTVB’s Jay Tust reported last night that the swimming and diving program has raised $170,000, including one donation of $50,000, according to a source.

In the past week, Boise State has picked up two football commits from Arizona’s 2019 Open Division state champion, Chandler High School. Running back Eli Sanders joins wide receiver Jalen Richmond, who gave his verbal to the Broncos last Tuesday. Sanders is a 6-0, 190-pounder who chose Boise State over Arizona and Arizona State. According to 247 Sports, he was “the top available playmaker in the state heading into the weekend.” Sanders rushed for 643 yards and 10 touchdowns last fall while splitting time in the Chandler backfield.

To say he and Richmond come from a winning program is an understatement. The 2019 title was Chandler’s fourth consecutive state championship and fifth in six years. The others came in 6A. As the Arizona Republic explains it, that was before the Arizona Interscholastic Association created an eight-team Open for the top schools among the biggest conferences.

Former Boise State star Troy Merritt turned in his best performance in almost a year over the weekend, finishing in a tie for eighth at the the Rocket Mortgage Classic in Detroit. Merritt went into the final round Sunday tied for fourth, but he opened with a double-bogey on No. 1. He settled down, though, and shot a one-under 71 as he played with eventual champion Bryson DeChambeau. The check: $211,875. It was Merritt’s best result since a second-place finish at the Barracuda Championship outside Reno last July.

Golf is best-positioned to get its 2020 season completed. Social-distancing is easily accomplished out on the course, and the PGA Tour has already conducted four tournaments without fans. So the good news is: the 31st Albertsons Boise Open is still scheduled to be played August 13-16 at Hillcrest Country Club. The bad—but not unexpected—news is that the event will not accommodate fans this year. The Boise Open is part of the Korn Ferry Tour Finals. How the PGA Tour puts together this year’s field is to be determined.

July 6, 2008: Roger Federer’s five-year run of Wimbledon men’s singles championships comes to an end in a remarkable five-set marathon against Rafael Nadal on Centre Court. Nadal took the first two sets, and—working around a long rain delay—Federer fought back to take the next two in tiebreakers. The elapsed time of the final was four hours and 48 minutes, and ended at 9:16 p.m. Wimbledon time when Nadal survived the final set, 9-7, after another rain delay. It was the final Wimbledon before the addition of the retractable roof. 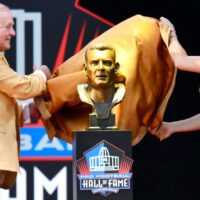 This Day In Sports: Good things come to those who wait – and wait