The Boise State men’s basketball team, coming off perhaps its best outing of the year in last week’s win over Pacific, is trying to prove that baby steps will pay off as it continues to re-tool. Now the Broncos get a second shot at Oregon, hosting the Ducks Saturday night in Taco Bell Arena. Boise State lost 66-54 two weeks ago in Eugene with one hand tied behind its back. The Broncos led at halftime but needed all their turbines firing to make it last. Only one was, and even he had some sputters in the second half. It was Alex Hobbs who scored 21 points while Justinian Jessup and RJ Williams were going a combined 1-for-15 from the field. In the two games since, Williams has scored 38 points and Jessup 35 while Hobbs has cooled off. Get all three of those guys going, and Boise State has a chance.

This Oregon team was supposed to be much improved from the one Boise State upset last year on the Lexus Williams buzzer-beater. That’s because Ducks coach Dana Altman produced the nation’s No. 5 recruiting class last spring. But Oregon hasn’t lived up to its billing and seeks a dominant win over Boise State to start changing the perception of underachievement. There’s been no injury update on Bol Bol, the 7-2 true freshman phenom who missed the first game against the Broncos and hasn’t played since. Louis King is playing, but he hasn’t fully rounded into form as he bounces back from a torn meniscus in high school. King, a 6-9 forward who was rated the No. 20 prospect in the country last season, is shooting just 26 percent from the field over the past four games.

WHAT HAPPENS TO THE BRONCOS’ STOCK?

The First Responder Bowl was going to be the difference between being ranked and not being ranked for Boise State. Now that it was “No Contest,” we don’t know what it all means. And we won’t until late the night of the national championship game when the final polls are released. The Broncos were No. 25 in the final College Football Playoff poll—that one won’t be updated. But the AP and Coaches rankings will be. Boise State was No. 25 in the AP Poll and No. 23 on the Coaches list going into bowl season. Will voters pay any attention to the nine minutes and 52 seconds of football in the First Responder Bowl? They shouldn’t, because it didn’t happen. Right?

BOWL SEASON NOT OVER FOR HARSIN

It’ll be “long time, no see” when Boise State coach Bryan Harsin and Boston College coach Steve Addazio meet up again Saturday in Bristol, CT. Just two days ago they were holed up with bowl officials in a room in the bowels of the Cotton Bowl stadium, agreeing to cancel the First Responder Bowl. Now they’ll be part of ESPN’s coverage of the Orange Bowl between Alabama and Oklahoma. Harsin and Addazio be manning the “ESPN Coaches Film Room,” analyzing the Crimson Tide and Sooners game plans as they unfold, along with Herm Edwards of Arizona State, and Gary Patterson of TCU. Here’s hoping Edwards doesn’t dominate the panel.

THE GIFT THAT KEEPS ON GIVING

One of my Christmas gifts (from my mother-in-law) was a “365 Sports Facts-A-Year” 2019 desk calendar. You can imagine I use something like that. So I opened it up, and the first item is January 1, 2007. Yes, the Fiesta Bowl. The first thing you see is a photo—not of Ian Johnson’s “Statue Left,” but of Boise State’s Korey Hall, Gerald Alexander and David Shields tackling Oklahoma quarterback Paul Thompson. It has been nice, however, to see a blip of Johnson in the cool TV promo for college football’s 150th anniversary. Never gets old, does it?

MW HOPES HANG ON THE PACK

It’s up to Nevada now if the Mountain West is going to have a winning bowl season. The conference is still 2-2 after the abstention in Dallas Wednesday, and the Wolf Pack wraps it up for the MW Saturday in the Arizona Bowl against Arkansas State. Nevada is favored by one point over the Red Wolves (who were led by Bryan Harsin five seasons ago) in what should be a competitive matchup. The Pack’s hopes rest on the arm of quarterback Ty Gangi, who won’t have wide receiver McLane Mannix at his disposal. Mannix has announced he’s transferring to Texas Tech, where former Utah State coach Matt Wells landed. Mannix is reportedly headed home to the Lone Star State partly to help his mother with some serious health problems.

OFF TO THE SINGLE DIGITS OF SOUTH DAKOTA

The Idaho Steelheads go on the road for the first time in more than a month for a three-game series beginning tonight at Rapid City (where the low tonight is going to be 7). It was there that the Steelheads last played away from home on Thanksgiving weekend, with goalie Tomas Sholl recording a pair of shutouts. Sholl goes into this weekend ranked second in the ECHL in goals-against average at 2.13. The hottest Steelies skater is Tony Calderone, who has racked up four goals and eight points in his past seven games. Idaho has won four of its last six matchups with the Rush.

Back to basketball—the Big Sky is switching to a full, 20-game round robin schedule this winter, with every school taking on each of the other teams in the conference home-and-home. Therefore, the Big Sky dives into conference play Saturday, and Idaho opens against Idaho State in Cowan Spectrum. The Vandals are 3-8, with just one victory over a Division I opponent (North Dakota). How has ISU been since upsetting Boise State in Taco Bell Arena in the season opener? The Bengals are 4-5 and own only one other win over a Division I opponent (Santa Clara).

December 28, 1958, 60 years ago today: A landmark day in NFL history—as what many call “the greatest game ever played” helps popularize pro football forever. The NFL championship game went to overtime, with Alan Ameche scoring on a one-yard dive to give the Baltimore Colts a 23-17 win over the New York Giants. The nationally-televised game extended into prime time and created legions of new NFL fans. 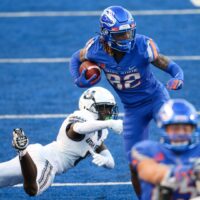 Sifting through bowl odds and reviews