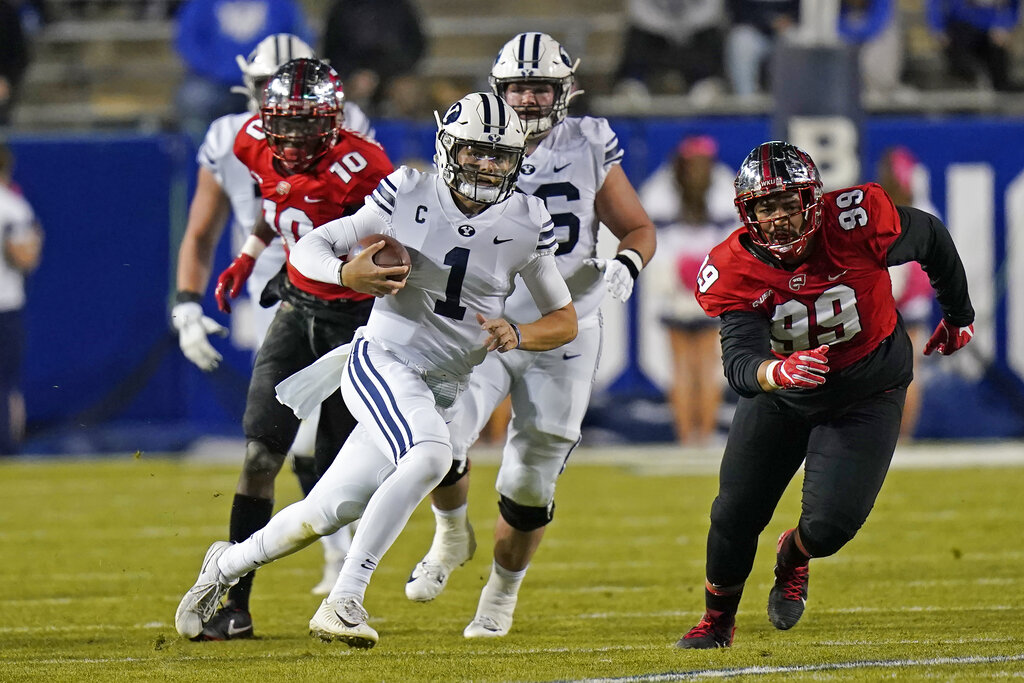 The game against BYU this Friday night on the blue turf is the biggest of the year for Boise State. That’s pretty easy to say for a team that’s played only two games. But it’s also the biggest for 7-0 BYU. If the Cougars are dreaming of a New Year’s Six bowl (or even the College Football Playoff), there’s no clear path since they’re not in a conference. BYU’s No. 9 ranking matters. But even if the Cougars go undefeated, that place in the polls is not sustainable without a win over a Top 25 team. That’s the opportunity the No. 21 Broncos present for all the nation to see on FS1. As for the Broncos, the opportunity is the same. But if they go undefeated, they’d have the extra punch of having been in a conference and being a champion from the Group of 5.

BYU, the only team other than Clemson with seven wins this season, is the highest-ranked opponent ever to visit Albertsons Stadium, topping Utah State and its No. 14 ranking in 2018. Five of its seven victories have been routs against totally outmatched teams. The only clunker was a 27-20 win in Provo over UTSA three weeks ago. The only other relatively close one was at Houston when BYU rallied to win 43-26. Boise State this week is a different animal. Here’s the most interesting stat I’ve found so far. Zach Wilson’s magic has BYU fifth in the nation in pass efficiency with a rating of 189.22. The Broncos are third in the country at 203.38. Sure it’s a small sample size, but that’s good.

Jack Sears is largely responsible for that national pass efficiency ranking after his lights-out performance at Air Force, and he’s the Mountain West Offensive Player of the Week. The USC grad transfer’s 280 yards on 17-of-20 passing with three touchdowns and no interceptions translated into the most efficient game by a quarterback in the Bryan Harsin era at Boise State. The conference Special Teams Player of the Week is Avery Williams, who gave the Broncos the final piece of insurance they needed at Air Force with an 88-yard kickoff return for a touchdown. It was Williams’ sixth career TD on returns—he’s had two on kickoffs and four on punts.

MAKESHIFT SECONDARY OR FULL SPEED AHEAD?

With JL Skinner absent and Tyreque Jones’ playing time limited due to injury, Boise State was forced to improvise at safety Saturday at Air Force, and it certainly changed the look of the secondary. The Broncos still list the 6-4 Skinner and the 6-2 Jones as starters, but 5-9 Avery Williams and 5-10 Kekaula Kaniho had to go most of the way at safety. The latter guys are both seniors and are great players. But whereas height wasn’t much of a factor against the triple-option, it could be versus BYU. We’ll likely have to wait until Friday to know which safety alignment comes to fruition for tight-lipped Boise State.

You may have heard Bryan Harsin’s press conference by the time you read this, but it’s unlikely much light will be shed on Boise State’s pressing injury situation going into Friday night’s game. Defensively, (beyond Skinner) Scale Igiehon’s situation will be closely-watched. This would be a special game for Igiehon. The last time BYU played at Albertsons Stadium, he helped sack Wilson at the Broncos’ four-yard line on the final play of the game to preserve a 21-16 win. (Do you remember that the Broncos had seven sacks of Wilson that night?) There’s probably less drama surrounding Demitri Washington. I wouldn’t be surprised if Harsin announces that the standout defensive end’s season has ended following the grim-looking injury he suffered at Air Force.

BACHMEIER AND HOLANI, TOO

If Hank Bachmeier can’t play Friday night, be it due to the time it takes to go thorugh COVID protocol or some undisclosed injury, Boise State would appear to be in good hands with Sears at quarterback. The Broncos hope the same is the case with Andrew Van Buren if George Holani is unable to bounce back from his knee injury Saturday. Van Buren was steady against the Falcons, rushing 12 times for 70 yards and two touchdowns. He was shaken up momentarily in the third quarter, and the Broncos’ answer was interesting. They didn’t resort to, say, putting Khalil Shakir at running back. In came Tyler Crowe, the walk-on from Skyview High. Offensive coordinator Eric Kiesau trusted him, too, calling a screen on Crowe’s very first snap that was good for 15 yards. He later added two carries for 14 yards in mop-up.

Including Boise State, there are three Mountain West teams sporting 2-0 records right now: San Diego State, San Jose State and Nevada. The Aztecs are worth some conversation right now after their 38-7 waxing of Utah State Saturday night. SDSU rushed for 407 yards—7.7 yards per carry—and is leading the nation in rushing at 347 yards per game. And San Diego State is dominating on defense, too. The Aztecs are tops in the country in total defense at 200.5 yards per game and scoring defense at 6.5 points per game. This team is forcing turnovers, too. SDSU had three takeways against the Aggies. Yet the Aztecs are a Top 25 aferthought so far, garnering just eight points this week in the AP Poll. Watch these guys.

Is DallasCowboys.com the official mouthpiece of the NFL team? Or is it just making an attempt to show its fans that it’s fair and balanced? If it’s the former, things are pretty sour right now for former Boise State great Kellen Moore. The site took some shots at Moore on Monday, calling the 23-9 loss at Philadelphia Sunday night a “mismanaged” game. Writer Bucky Brooks points to Moore not being able to resist “the cute plays and passes on the call sheet” despite having to go with deer-in-headlights rookie quarterback Ben DiNucci. Moore called a pass in a goal-to-go situation following a series of Ezekiel Elliot runs. And, Brooks wrote, “Moore cost the Cowboys points in the third quarter when he called a reverse to Cedrick Wilson after seven straight runs to Elliott and Tony Pollard.”

November 3, 1995, 25 years ago today: Portland’s commitment to remain a major pro sports city is reinforced with the opening of the Rose Garden, the new 20,000-seat arena in the city’s Rose Quarter. The Blazers didn’t ride the hoopla well, falling to the Vancouver Grizzlies, 92-80. The sellouts that were the norm in the adjacent Memorial Coliseum would continue in the Rose Garden, at least until the team was tagged with the “Jailblazers” nickname at the turn of the century with the onset of numerous off-court problems. But Damian Lillard has brought the Blazers back into favor, thriving in the building now known as the Moda Center

Shaking up the Broncos’ routine – again 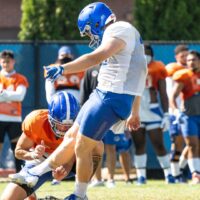