I don’t think there’s any argument here—these past two days have been the darkest days in the history of sports. Just 72 hours ago we were innocently debating Boise State’s merits of an NIT bid. Now, everything is shut down. Coronavirus has done what 9/11 couldn’t do in 2001: it has brought everyday life in America to its knees. In 2001, sports were there to heal us. Today, there’s nothing. What is going to make America feel better? One of the saddest things of all is the seniors around the country who suddenly, swiftly and shockingly saw their sports careers come to an end.

There’s some consolation for Bronco men’s seniors Justinian Jessup, Alex Hobbs, RJ Williams, Marcus Dickinson and Robin Jorch. With the Mountain West Tournament played a week earlier than usual, at least they knew it might be over. Now it’s a sure thing. Jessup will retain the Mountain West career record for three-pointers. Utah State’s Sam Merrill won’t have a chance to catch him now (Jessup made 325 treys the past four seasons—Merrill 319). Hobbs and Williams ended their careers on high notes, with Hobbs putting up 21 points against San Diego State last Friday and Williams finishing with a fourth straight double-double. It would have been great to see Hobbs’ patented floater just one more time.

It’s a devastating way for the Boise State women’s seniors to see it end. They had already been waiting more than a week for the Broncos’ NCAA Tournament draw following their fourth straight Mountain West Tournament championship. Among those seniors, Braydey Hodgins had just returned to her old self in the title game win over Fresno State. The Preseason MW Player of the Year scored 20 points, her first 20-point outing since February 1. Hodgins finished her career with 1,150 points, while Riley Lupfer ends with 1,538 points and 350 three-pointers. Both players logged 128 total games as Broncos. Then there’s A’Shanti Coleman, who was just hitting her zenith as Mountain West Tournament MVP, and Jayde Christopher, with her jaw-dropping 270 assists this season.

College of Idaho coach Colby Blaine said Thursday on Idaho SportsTalk that his team isn’t going to get all wrapped up in claiming a national championship after the NAIA Division II Championships were cancelled. The Coyotes were the No. 1 seed, though. Three Idahoans are dealing with the stunning end as seniors: Centennial High grad Talon Pinckney, Rocky Mountain grad Nate Bruneel and Jake Bruner from Cottonwood. Pinckney scored 17 points in what turned out to be his final game Wednesday night, Bruneel led the Yotes in scoring this season with 13.4 points per game, and Bruner appeared in all 34 games for C of I as a spark off the bench, averaging 7.0 points per game.

Boise High grad Isabelle Hadden was about 24 hours away from playing for her first NCAA Tournament when the Idaho women found out their Big Sky championship game wouldn’t happen today. Hadden was coming off a crucial contribution for the Vandals in the semifinals, scoring 12 points with five rebounds in just 15 minutes in the win over Idaho State. Idaho has not qualified for the NCAAs since 2016. (Janie King out of Eagle High is only a sophomore.)

The NNU women were already in Honolulu for their scheduled first-round game against UC San Diego today in the NCAA Division II Tournament. The Nighthawks were resigned to what was about to happen, but they wanted to go to practice anyway. When official word came down of the cancellation, NNU insisted on finishing practice, and went through all the sets it had prepared for UCSD. The Nighthawks, including seniors Avery Albrecht, Marina Valles and Zoe Wessels, savored one last time on the floor together.

John Molchon’s invitation to the NFL Combine last month was seen at the time as a nice bonus for Boise State, giving the Broncos four representiatives in Indianapolis. Well, it’s turned out to be huge for Molchon (not to mention Curtis Weaver, Ezra Cleveland and John Hightower). NFL teams are scrapping plans to scout college pro days. Boise State’s is slated for April 2. It would have been Molchon’s only chance to impress NFL people had he not gone to the Combine. He participated in all the drills except the 60-yard shuttle and did okay, so the data is there. Former Bronco David Moa was not at the Combine, so pro day is (or would have been) a big deal to him. Moa seemed like a shoe-in as an NFL Draft pick after his monster 2016 season, when he racked up 8.5 sacks. He had only two in his career after that.

The last major event before the nationwide sports shutdown was the first round of The Players Championship Thursday. The PGA Tour shut down later in the evening. Former Boise State star Troy Merritt shot an even-par 72 at TPC Sawgrass. The original plan was to play the next three rounds without fans, but the tour fell into step with other sports in the end. An opportunity for levity here. When Graham DeLaet heard about the no-fan plan at TPC, he tweeted, “We played Congressional with no fans about 6 years ago. Strangely, I didn’t even know until I was told about it at lunch by a player who actually had fans at the time.”

A COUPLE OF THE CAMPUS CANCELLATIONS

Among the events you won’t get to see this weekend in Boise (beyond the Big Sky championship games) are the first home games of the season for the Boise State women’s softball team, which was to open Mountain West play today with a Top 25 matchup. The Broncos’ three-game series against No. 25 Fresno State is a goner. The Bulldogs are (were) 21-4. And there won’t be a Senior Night for the Boise State women’s gymnastics team tonight. The Broncos were set to honor two seniors, both of them 2016 Olympians: Isabella Amado of Panama and Courtney McGregor of New Zealand. I’ll save the subject of Boise State spring sports in general for Monday.

March 13, 2015, five years ago today: The Boise State women’s basketball team wins its first Mountain West championship and earns only its third NCAA Tournament berth ever with a 66-60 win over New Mexico in the MW Tournament final. Bronco sophomore Brooke Pahukoa was named tournament MVP as Gordy Presnell won his second title as BSU coach—the other came in 2007 in the WAC. Boise State would draw the legendary Tennessee Lady Vols in the first round of the NCAA Tournament the following week and would stay with UT before falling 72-61 in Knoxville. 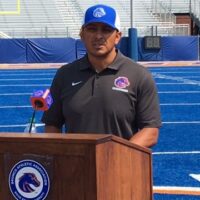