Boise State’s first-teamers are strong all across the board this season. Even the unidentified ones (quarterback and running back). But if injuries crop up the way they did last year, will the Broncos’ depth compensate? This is particularly important at linebacker. The presumed starter at middle ‘backer is Zeke Noa, who was so strong down the stretch last season after Riley Whimpey’s ACL tear. Whimpey may or may not be ready to start on the weak side against Florida State. If not, that’s where depth becomes paramount. Perhaps Noa would move back to that role, elevating former walk-ons Benton Wickersham and Bruno DeRose in the middle. Or maybe redshirt freshman Brandon Hawkins is ready to step up.

Coach Bryan Harsin mentioned last Friday how nice it was to see redshirt freshman Phillip Mills healthy and running around out there. And Harsin expects the long-awaited Josh Booker-Brown to arrive at any time after completing course work at Pearl River Communituy College in Mississippi. Booker-Brown is the 6-3, 228-pound inside linebacker who just committed to the Broncos at the end of May. There’s a reason the Broncos welcomed that news with open arms. Make no mistake—there are some unknowns in Boise State’s linebacking corps.

The theory that Boise State coach Bryan Harsin should refrain from naming his starting quarterback until the guy hits the huddle in 10 days is gaining traction. Dan Hawkins did this once while he was coach. In 2004, when Jared Zabransky and Mike Sanford were competing to succeed Ryan Dinwiddie, Hawk didn’t reveal his starter until Zabransky trotted out for the first series in the opener on the blue turf, a 65-7 win over Idaho. There’s a lot more at stake in the Florida State game. And whether Harsin would be able to keep the Chase Cord-Hank Bachmeier decision under wraps in today’s social media world is debatable, but it’s worth a shot. It would also allow Harsin to reserve the right to change his mind on the way to Jacksonville.

San Diego State has more to look forward to now, as its new stadium took another step from concept to reality during the team’s annual FanFest last Saturday. The San Diego Union-Tribune reported that SDSU unveiled updated renderings for the 35,000-seat stadium, including three tiers along the home sidelines. There’ll also be standing-room-only viewing areas, large concourses and a food truck zone at one end. And palm trees, of course. The Aztecs say the timetable has groundbreaking set next spring, with completion in time for the 2022 football season. Which means when Boise State next visits San Diego State in 2021, the game will be in the stadium formerly known as Qualcomm (if it’s still there). If the Mountain West rotation remains in place, it’ll be 2025 before the Broncos get to play in the new facility.

College of Idaho has always had a strong rushing attack. This season’s run game could be its best yet. The Coyotes have led the Frontier Conference in rushing yards per game each of the past three seasons. However, only once in the first five years since football returned has a running back led the Yotes in rushing. That might not change this year with ground-chewing quarterback Darius-James Peterson back for his senior year, but Nick Calzaretta promises to make it interesting. Calzaretta shook off an injury for a strong finish to the 2018 season and has 1,000 yards in him if he can stay healthy for 11 games. Calzaretta and fellow returnee Dominic Garzoli both peeled off some big gainers Sunday in C of I’s first scrimmage of fall camp.

WHAT’S ON THE LINE AT HILLCREST

Time for an annual refresher on how the Korn Ferry Tour Finals work as the Albertsons Boise Open tees off tomorrow. In 2013, what is now the Korn Ferry became the primary vehicle to get to the PGA Tour. The top 25 money winners during the regular season are guaranteed spots on the big tour for the following season, which has been moved up to a September start this year. But “The 25” still plays the Korn Ferry Finals this month, and—except for the No. 1 player—their priority rankings will be decided by results from the three-event series. There are an additional 25 PGA Tour berths up for grabs based on winnings in the Finals, which are designed to include 150 players (the top 75 from the Korn Ferry and Nos. 126 through 200 on the PGA Tour money list).

DELAET’S GETTING CLOSER TO THE COURSE

Former Boise State star Graham DeLaet has played in six Albertsons Boise Opens, the most recent in 2011. DeLaet’s in a very different place now as a PGA Tour veteran. Severe back problems have kept him off the PGA Tour for almost two years. He was on Idaho SportsTalk Tuesday and said he still plans to return in about a month at the Safeway Open in Napa, CA. DeLaet tied for fifth there in 2017, two weeks before the pain forced him to stop playing. He wants to play three or four events this fall, “then really crank it up in January.” And DeLaet can’t wait. “I miss the flights, I miss the hotels, I miss the boys, I miss the money game,” he said. Right now DeLaet is gearing up for his charity tournament, the “Graham Slam,” at SpurWing September 8-9.

A change of scenery didn’t do much for the Boise Hawks Tuesday night. Stop No. 3 on the Hawks’ Western Idaho Fair road trip is Salem-Keizer, and they came away with loss No. 6 of the journey in a 5-3 defeat. The Volcanoes struck with three runs in the bottom of the first inning—that’s kind of the way things have been going for Boise. The Hawks’ Daniel Cope hit his second home run of the season in the second, but there weren’t enough such answers.

August 21, 2007: The biggest day at the plate by any former Boise Hawk to make the majors, as Garret Anderson of the Los Angeles Angels knocks in 10 runs, a franchise record, in an 18-9 win over the Yankees. Included in Anderson’s barrage were a grand slam and a three-run homer. Anderson had the longest big league career of any Hawks alum at 16 seasons. He’s still the Angels’ all-time leader in games played, at bats, hits, total bases, singles, doubles, grand slams, extra-base hits, career RBIs, and consecutive games with an RBI (12). 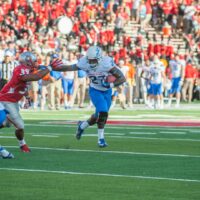 This Day In Sports: The Jay-Train leaves the station