The player who coach Bryan Harsin seems to be the most excited about coming out of the win at San Jose State is Andrew Van Buren. The sophomore running back was actually the Broncos’ leading rusher after the woebegone first half and had 85 yards on just nine carries for the game, including a clinching 32-yard touchdown in the fourth quarter. “Andrew Van Buren had two runs that were physical, and they meant a lot to what we were trying to establish at the time,” said Harsin. One was a 16-yarder midway through the fourth immediately following a George Holani fumble (recovered by the Broncos). Three plays later came the TD.

It’s taken Van Buren a while to get over the hump. He fumbled in each of the first two games of the season. In the third against Portland State, he caught a swing pass from Hank Bachmeier on a third-and-10 and gained nine yards, giving the Broncos a makeable fourth-and-one at the 19-yard line. However, Van Buren was called for a facemask penalty, costing Boise State 15 yards. The drive ended shortly thereafter with a missed 51-yard field goal attempt. Van Buren’s usage decreased—he had a combined four carries against Hawaii and BYU. His yardage at San Jose State was a career-best. AVB’s previous high was 75 yards in the home opener against UConn last year, but that was in garbage time of a 62-7 rout. This time Van Buren got big yards when it really mattered.

THREE UP FOR THE BRONCOS, ONE DOWN FOR THE COWBOYS

This is as good an injury update as you’re going to get from Boise State: “The guys who didn’t play in (the San Jose State) game, expect them to play in this game,” said Harsin. That means Robert Mahone (so we consider the backfield crowded now?), as well as safety Kekoa Nawahine and left guard John Molchon (both of whom were missed against the Spartans). There was also a significant update from Wyoming, the Broncos’ foe this Saturday night on the blue turf. Wyoming quarterback Sean Chambers will miss the remainder of the season with a left knee injury, Cowboys coach Craig Bohl announced Monday. Chambers didn’t pass much this year, nor did he pass particularly well. But he was a dangerous runner, rushing for 567 yards and 10 touchdowns. Tyler Vander Waal will replace Chambers.

WHEN THE DEFENSE DUG IN

Before we let the San Jose State game go, here’s the key defensive sequence of the night, turning it in favor of Boise State. It came in the fourth quarter with just under 11 minutes remaining after a Holani touchdown had given the Broncos a 38-34 lead. The Spartans were in Boise State territory again when they were called for a block in the back, putting them in a second-and-17. All night long, SJSU had gotten out of such predicaments. But Josh Love overthrew a receiver on the next play, and Curtis Weaver followed with the Broncos’ long-awaited first—and only—sack of the game. That was a crucial turning point.

A DOUBLE-DIP ON AWARDS

It’s ironic that after Boise State’s not-most-impressive win of the year, the Broncos collect two Mountain West Player of the Week awards. Even one is rare. Holani gets the nod on offense, mainly on the strength of his four rushing touchdowns Saturday night. He became the first Boise State true freshman to run for four TDs in a game since BSU Hall of Famer Cedric Minter in 1977. Avery Williams takes the special teams honor for his game-changing 66-yard punt return for a touchdown. Williams was also included on this week’s Paul Hornung Award Honor Roll.

WINDING THROUGH THE MOUNTAIN WEST

The smoke has cleared from a tense and revealing Mountain West weekend. Air Force is feeling great and Utah State not so much after non-conference rivalry games. The Falcons took an emotional 17-13 win over Army, capped by a goal-line stand, and Utah State got racked by BYU 42-14 after being outscored 21-0 in the second half. We know a little more about the West Division race now—Fresno State is still in and Hawaii out after a 41-38 Bulldogs win at Aloha Stadium. The ‘Dogs have two conference losses but control their own destiny in the division. The Rainbow Warriors have been effectively eliminated. And Colorado State is setting itself up as a trap opponent. The Rams won their third in a row, 37-17 over UNLV, which has been axed from bowl contention (probably curtains for coach Tony Sanchez).

THE STUMBLE OUT OF THE GATE AND ITS LASTING EFFECT

Two years ago, Willie Taggart was coaching Oregon, although he left before the Ducks faced Boise State in the Las Vegas Bowl to go to Florida State. Alas, Taggart did face the Broncos in the season opener this year, and the 36-31 loss sent FSU down the wrong path. Taggart eventually lost the team, and he was fired Sunday after a 27-10 loss to Florida Saturday that dropped the Seminoles to 4-5. The death knell began Saturday night when ESPN’s Kirk Herbstreit ripped the lack of discipline in Taggart’s program in an Instagram video with Chris Fowler: “Florida State, they’ll knock a guy out, hit a guy, after a 20-yard gain on 3rd and 15 and blow a guy up and then stand over the top of him and talk crap to him. It’s like, bro. It’s a first down. Like, they have no awareness. And I’m just done talking about them.”

The games start counting this evening for Boise State’s basketball squads in ExtraMile Arena. The men take on Life Pacific, an NAIA school in San Dimas, CA. The Warriors are 2-0 and should provide a better test than West Coast Baptist did in the exhibition game. This is the Broncos’ one chance to work out the kinks before taking on Oregon in Eugene this Saturday night. Specifically, coach Leon Rice will want to settle rotations and situations for what looks like the diametrically different inside duo of Robin Jorch of RJ Williams. The Boise State women host some in-state Warriors, those of Lewis-Clark State. With a nod to John Wustrow of the Idaho Press, who did the original math, it’s been 589 days since the Broncos’ Mallory McGwire played in a real game (for Oregon in the 2018 NCAA Tournament).

POSTSEASON ON THE BRONCOS’ PITCH

The Mountain West Women’s Soccer Tournament begins today at the Boas Complex, with Colorado State facing Fresno State and San Jose State taking on New Mexico. On Thursday, San Diego State awaits the first-game winner, and Boise State gets the second-game survivor. On Monday, four Broncos were named to the 12-player All-Mountain West first team: Raimee Sherlee, Aubree Chatterton, McKenna Kynett and Mikayla Schachtell. Sherle, who was edged by Air Force’s Lexi Romero for the MW goal-scoring and points titles, was also nosed out by Romero as conference Offensive Player of the Year on Monday.

This Day In Sports…brought to you by ADVANCED VISION THERAPY CENTER…improved eyesight starts here.

November 5, 1994, 25 years ago today: The latest showdown in a series of showdowns for Boise State’s 1994 football team, as All-Big Sky quarterback Dave Dickenson leads top-ranked Montana into Bronco Stadium. A leaping Rashid Gayle interception set the tone in the first quarter, and BSU defensive end Joe O’Brien led a sack attack on Dickenson, who left the game in the fourth quarter. The Broncos beat the Grizzlies, 38-14, and would go on to the Big Sky title and the Division I-AA championship game. 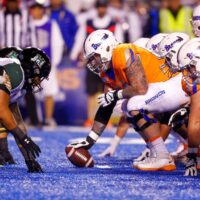