Boise State’s first depth chart of the season is indeed out, and junior Robert Mahone is tabbed as the starter at running back over sophomore Andrew Van Buren and true freshman George Holani. That may not mean much, especially in October and November, but it’s a win for Mahone. “He didn’t let those other two guys beat him out,” said coach Bryan Harsin Monday at his first in-season presser. Harsin’s been impressed by Mahone since he was ruled ineligible for the First Responder Bowl. “I like to see guys overcome some adversity,” Harsin said. On the field? “He keeps elevating himself in those practices to put himself in a position to be the starter.” Expect to see Van Buren and Holani, though. It could be a committee. Consequently, there may not be a 1,000-yard rusher at Boise State this year. We’ll see.

CAN’T KEEP THESE MAINSTAYS AWAY

At defensive tackle and weakside linebacker, it’s David Moa and Riley Whimpey, respectively (and respectfully)—no questions asked. “They’re ready to play,” said Harsin of the two guys whose 2018 seasons were ended by injuries. Harsin praised Moa’s relentless work in getting back on the field when he didn’t even have to return to the Broncos this year. And Whimpey? “He’s as high-character a guy as we’ve ever had on our team.” Whimpey’s rebound has been remarkable. It’s been less than 10 months asince he tore his ACL against BYU. With Florida State’s offense going up-tempo this year, can Whimpey be expected to be on the field for, like, 90 snaps this Saturday in Jacksonville? Zeke Noa is the starting middle linebacker, but presumably he could slide over to Whimpey’s spot if needed (like last year).

OTHER FROSH TO WATCH

There are two other true freshmen on the depth chart beyond Holani and quarterback Hank Bachmeier. One is at safety, where JL Skinner is backing up Kekoa Nawahine. Skinner’s case is partly helped by an injury to junior Jordan Happle, one that Harsin called “non season-ending.” Nawahine is a nicely-sized safety at 6-2, 207 pounds. Skinner, who starred at Point Loma High in San Diego, is 6-4, 213. “It’s just not common,” said Harsin of Skinner’s combination of size, football smarts and coachability. The other guy right out of high school is Markel Reed, who’s listed No. 2 behind Avery Williams at cornerback. Reed was practicing with the veterans very early in fall camp.

BENNETT MORPHING INTO A RIVAL

There’s another true freshman in the news, one who was playing for Boise State until last Friday. Quarterback Kaiden Bennett is headed to Nevada. Tweeted coach Jay Norvell Monday: “I would like to welcome former Folsom QB and Reno native Kaiden Bennet to the Nevada Football Team. Welcome Home!” Norvell can be forgiven for leaving a “t” off “Bennett.” He’s excited. Bennett’s father, Derek, told Chris Murray of Nevada Sports Net he thinks the move was because Kaiden didn’t get a fair shot to compete with Hank Bachmeier and Chase Cord for the Broncos’ starting spot. “He felt he was just as good as Bachmeier or better and, ‘If you are going to give me a fair chance at winning the job, well I can win this job,’” Derek Bennett told Murray. “Kaiden got pushed to the back a little bit.”

Junior James Blackman has officially been named starting quarterback at Florida State, beating out Wisconsin transfer Alex Hornibrook. Blackman started 12 games as a true freshman for former Seminoles coach Jimbo Fisher in 2017. He threw for 421 yards and four touchdowns with one interception in his only start last season. Blackman is working with his third offensive coordinator in three years, but this one is Kendal Briles, whose spread offense at Baylor gave Boise State fits in the 2016 Cactus Bowl. He’s learning Briles’ scheme by doing—he isn’t using a playbook. “It’s a great thing not having a playbook because you have to go and make sure you write up the plays by yourself,” Blackman said. “And go study by yourself and make your own playbook.” Odd approach. We’ll see if it works.

You can’t even say “arguably” here. College of Idaho has its best football team since reinstating the sport five years ago. The Frontier Conference favorites, ranked 15th in the NAIA preseason poll, open the season this Saturday in the I-84 rivalry against Eastern Oregon at Simplot Stadium, the key words being “open the season.” If the Yotes can do that differently than they did last year, this is sure to be a playoff team. C of I started 0-5 last season before an incredible six-game winning streak to finish the fall. But the Yotes were also slow out of the gate in the preceding three years. With two of their first three games at home, this season sets up well.

Not that it’ll make a lot of difference in the result when Idaho plays Penn State this Saturday, but there’s a little cloud over the Nittany Lions going into the opener. A former PSU team doctor is suing the school, as well as coach James Franklin and athletic director Sandy Barbour. Dr. Scott Lynch claims he was removed as director of athletic medicine in March after complaining to school officials about being pressured to clear players to return from injuries. That is a sensitive subject in today’s world. Lynch also claims Penn State violated whistleblower laws. Nevertheless, the Nittany Lions are favored over the Vandals by 40 points.

With six games left in the season, here’s the drama left for the Boise Hawks: can they avoid a 50-loss season? They’re 25-45 now after a 5-4 loss at Tri-City Monday night. It looked for a while like Boise could come back from the brink. Trailing 4-0, the Hawks put up a four-spot in the sixth inning to tie the game. Two of the runs came via a wild pitch and a throwing error, but the Hawks’ll take them any way they can get them. The Dust Devils, however, began the bottom of the ninth with a double and RBI single to walk it off.

August 27, 2004, 15 years ago today: The United States loses to Argentina, 89-81, in the Olympic semifinal in Athens, marking the first time the U.S. had ever failed to win a gold medal with an NBA roster. The team was devoid of NBA stars, with most of the day’s luminaries electing to sit out the Olympics to rest. Argentina would go on to win the gold behind another NBA player, Manu Ginobili. It was then that the U.S. resolved to convince its top players to become Olympians, and the Americans went undefeated in Beijing in 2008 and in London in 2012.

You May Shrug, But You Shouldn’t 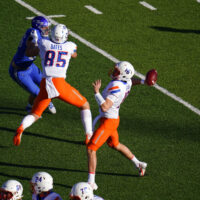 One comment on “Boise State football: Group session ahead?”