Colorado State players billed their season finale Friday against Boise State as their Super Bowl, and the Rams played like it for the most part. For the Broncos, the 31-24 win was the latest edition of “Getting Everybody’s Best Shot,” and the latest example of surviving it. They did it despite being outgained 379 yards to 344 and in yards-per-play 6.3 to 4.7. But man were there some monster plays made. And there was a raucous celebration in the locker room as this team became Boise State’s first ever to go undefeated in Mountain West play. As sweet as that is to the Broncos, there’s that sour taste remaining from the 2018 Mountain West championship game loss to Fresno State. The 8-0 record is an accomplishment, but a ring is the grand prize. Hawaii is waiting on the other side.

Where would Boise State be without those two interceptions Friday at Colorado State? The Broncos weren’t exactly stopping the Rams offense cold, and those plays by Tyreque Jones and Curtis Weaver were as big as any. They turned into 10 points, no small factor in a seven-point game (do ya think?). There’s “interception irony” after the Broncos managed just five interceptions in the first 10 games this season, scoring 14 points off of them. In the last two games, there have been four picks, one for a touchdown, cashed in for 17 points in all. And there’s this: the Broncos finally have more interceptions than last year. (Not more points off of them, though—they tunred into 42 points last season).

OTHER SAVERS OF THE DAY

You could argue that it was the most clutch performance of Khalil Shakir’s young career. Shakir had seven catches for 103 yards, and two of them in the fourth quarter stand out in particular. There was the incredible go-up-and-get-it grab in traffic, covering 35 yards and setting up Boise State’s final touchdown. And then there was the game-clincher with a minute and a half left, as Shakir cradled a nine-yard reception on a third-and-six, allowing the Broncos to run out the clock. And you can’t let that game go without mentioning another defensive jewel: David Moa made the long-awaited first sack of his senior season. It came with just over two minutes left, and it was Boise State’s only sack of the day, forcing CSU into an excruciating decision to punt.

Colorado State made up its mind to stop the run and make Jaylon Henderson beat them through the air. Henderson did just fine. It affected George Holani, though, as he had just 42 yards on 18 carries Friday. But he did break his first record as a Bronco. Holani now has 912 yards rushing this year, the most ever in a season for a true freshman. He eclipsed the standard of 877 yards set in 1977 by Cedric Minter, who ultimately became Boise State’s career rushing leader (and is to this day). For comparison’s sake, the best number by a Bronco true freshman in the 21st century had been 346 yards by D.J. Harper in 2007.

DISTRACTION IN THE OFFING?

Bryan Harsin has posted 11 or more wins in three of his six seasons at Boise State, including this one. Might that be attractive to another program? But of course. Missouri fired coach Barry Odom Saturday, and Harsin is prominent in speculation on Odom’s successor. Harsin has at least been in the general SEC neighborhood before, coaching one season at Arkansas State and serving as offensive coordinator at Texas in the Big 12 for two seasons. Certainly the Tigers admire his recruiting acumen, but NCAA sanctions handed down earlier this year would be a hindrance out of the gate, including a five-percent decrease in scholarships and a seven-week ban on recruiting communication and all off-campus recruiting contacts, plus a 12.5 percent decrease in official visits. Would the money be worth it?

College of Idaho could taste the NAIA Playoffs semifinals, but the Coyotes got into a defensive slugfest with Grand View of Iowa Saturday and saw their season end with a 14-6 loss. The Yotes outgained the Vikings 319 yards to 256 for the game, but a short punt and an interception in the second quarter led to Grand View’s two touchdowns, and that was it. The loss put the capper on a Yotes season that will never be forgotten: 11-1, the best in school history, a 17-game winning streak that stretched over two seasons, a first Frontier Conference championship and an NAIA Playoffs victory. And there’s at least one player who will never be forgotten, quarterback Darius-James Peterson, who leaves with a bushel of school records.

Boise State men’s hoops, sobered by the losses to Oregon and UC Irvine, is getting its legs. The Broncos broke open a close game against UNC Wilmington Friday night in ExtraMile Arena and won going away 80-59 in Leon Rice’s 300th game as head coach. The Seahawks had pulled to within a point early in the second half before the Broncos went on a 28-9 run, with Derrick Alston scoring or assisting on 15 of the first 19 points during the explosion. Alston topped 20 again, putting up 24, while RJ Williams was a force inside, scoring 21 points on 9-for-11 shooting. Boise State is as prepped as it’s going to be for the two weird early-December Mountain West Games this week—Wednesday at New Mexico and Saturday against Colorado State.

The Boise State women have played a rugged early-season schedule, and they hope that will give them tough skin for Mountain West play. The Broncos visited TCU Sunday and came away with a 77-65 loss, falling by behind 22-11 at the end of the first quarter and never recovering. Boise State forced 20 Horned Frogs turnovers, but they committed 20 themselves. The Broncos had two players in double-figures, but only barely: Braydey Hodgins and Mallory McGwire scored 11 apiece. Boise State is now 4-4 and faces a tall task Wednesday night versus New Mexico in ExtraMile Arena.

The Idaho Steelheads dropped two of three on home ice against Rapid City over the long Thanksgiving weekend. The losses were particularly frustrating. The Steelheads had a 3-1 lead on the Rush in the third period Friday night and let it slip away, with RC’s Giovanni Fiore scoring the game-winner with one second left in the game. Then on Saturday, the Steelies fell behind 3-0 and lost 4-2 in CenturyLink Arena. The shots-on-goal were mind-boggling. Rapid City put up 13 shots and scored four times—Idaho peppered the Rush with 51 shots and scored twice.

December 2, 2009, 10 years ago today: The New Jersey Nets fall 117-101 to the Dallas Mavericks and set an NBA record for futility. It was the Nets’ 18th straight loss to start the season. New Jersey, which earlier in the week had fired coach Lawrence Frank, passed the 1988 Miami Heat and 1999 Los Angeles Clippers, who both dropped their first 17 games. The Nets’ infamy had competition that day, though, as reports of Tiger Woods’ various extramarital affairs first hit the headlines.

All about getting drives off to good starts 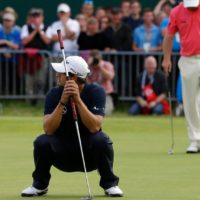 This Day In Sports: Adam Scott proves it’s never in the bag

New Mexico to the next power