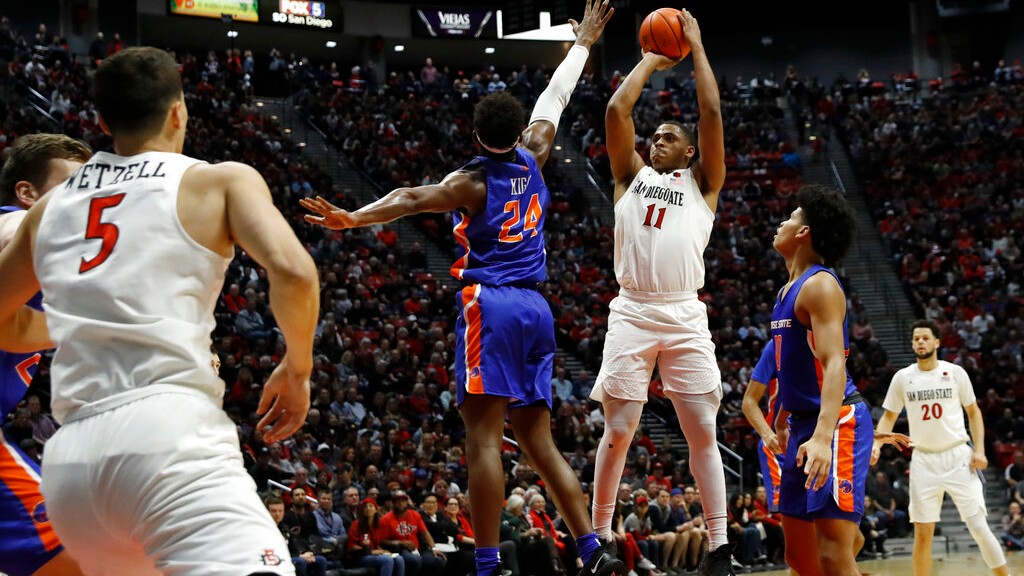 When the Mountain West announced this season’s special format for conference games in early November, it placed Boise State at Viejas Arena to face San Diego State for the final two scheduled games of the regular season. It was the perfect scenario, considering the Aztecs and Broncos had been picked one-two in the Mountain West preseason poll. Lo and behold, they go in that way as Game 1 of the series tips off tonight. They’re flip-flopped in the standings right now, but that could turn on a dime the next three days. The Las Vegas line on tonight’s contest is San Diego State by 6½ points. Keep in mind that Vegas oddsmakers are pretty smart. But it’ll be good for Boise State to have an underdog mindset at SDSU. The Broncos are facing a team that thumped them three times last year by a combined 48 points.

If you follow Mountain West basketball over the course of a season, you get used to certain names. This year, outside of Boise State’s standouts, there’s Jordan Schakel and Matt Mitchell. San Diego State is senior-laden and deep, but Schakel and Mitchell are a cut above. Schakel leads the conference in three-pointers with 63 and in accuracy from beyond the arc at 45.7 percent, the fifth-best mark in the country. He always seems to strike when the Aztecs need him the most. Mitchell has been a four-year stalwart for SDSU, now one of the top 10 scorers in school history. The Aztecs are 27-2 when he scores 15 or more points. San Diego State was swept in its series at Utah State in mid-January. Mitchell was injured in Game 1 and missed Game 2 in Logan. The Aztecs haven’t lost since.

WHAT COULD BE FOR THE MOUNTAIN WEST

The top four teams in a very strong Mountain West this season are San Diego State, Boise State, Utah State and Colorado State. Over the long haul, this is familiar territory only to the Aztecs, who have won 12 conference championships. And that’s a problem for the Mountain West. Consider this tweet from veteran writer Jon Rothstein of CBS Sports: “The most amazing part of the resurgence of the Mountain West Conference? It came with neither UNLV or New Mexico among the top five teams in the league.” When the Broncos entered the league almost 10 years ago, the Rebels and Lobos were perennial powers, playing before 15,000 fans more often than not. Now, UNLV is languishing around .500, and UNM is 2-13 in conference play. Imagine the Mountain West with those two schools in their former glory.

BOISE STATE & THE POWER 5 OF THE FUTURE

There was food for thought Wednesday in Stewart Mandel’s Mailbag at The Athletic. Here’s the questions in a nutshell: “As more conference TV deals are set to be negotiated in a few years, there is a likelihood that we’re due for another round of conference realignment. Let’s say the Power 5 ends up with 70 members, so five more. Who would you say are the top five schools most likely to make the leap?” Mandel had it this way: 1. Cincinnati; 2. Boise State.” The longtime college football writer has the Broncos ahead of UCF, BYU and San Diego State in his top five.”

Mandel’s narrative: “The Pac-12 has, to this point, never shown any real interest in Boise State despite its football program being easily the most recognizable brand in all of the Group of 5. Why? Academics. (Just so you know, I hate denigrating a school’s academics. Those rankings are completely arbitrary. But I can’t deny they play a huge role with notoriously snooty university presidents.) Boise is in the “No. 298-389” tier in U.S. News’ rankings, well below any current Pac-12 member. All I know is that Boise is one of the few Group of 5 teams that Joe Power 5 Fan will stop and watch if its game is on. Boise has also built a solid men’s hoops program. It’s a logical fit athletically.”

That’s an accurate assessment from Mandel. But his view of possible changing priorities among Power 5 conferences is also worth noting: “The incentives for realignment have changed considerably since the last big wave in 2010-12. A primary driver then was cable households. A decade of cord-cutting later, that couldn’t be less relevant. If one or more conferences opt to expand, their primary motivation will be to make their content—the games themselves—as appealing as possible to television consumers, therefore driving up its value.” I guess the moral of the story is, never say never.

Idaho State has drawn Weber State for its long-awaited football opener on Saturday in Holt Arena. The Bengals need an accomplished quarterback to compete with the Wildcats, a Big Sky power of late, and they appear to have one in Tyler Vander Waal. The last time we saw Vander Waal in-state, he was giving Boise State a heckuva scare in the Broncos’ 20-17 overtime victory over Wyoming on the blue turf. The 6-4, 217-pounder transferred to ISU at the end of that season and will start against Weber. Vander Waal didn’t have glowing stats with the Cowboys—a completion percentage under 50 percent with eight interceptions against six touchdown passes—but the fresh start in Pocatello promises to do him good.

February 25, 1964: In Miami Beach, 21-year-old Cassius Clay shocks the world by dethroning heavyweight champion Sonny Liston. Displaying lightning-quick feet and hands, the brash young boxer who would later change his name to Muhammed Ali kept the powerful Liston frustrated for six rounds. Claiming a shoulder injury, Liston didn’t come out for the seventh, relinquishing his crown. It was a big weekend in Miami—the Beatles were also in town during their first visit to America to make a second appearance on the Ed Sullivan Show.

Broncos go down the hall for OC