Define “students on campus.” That’s supposedly the benchmark for college football teams taking the field this season. Tim White, the former University of Idaho president, is now the chancellor of the California State University system. And that includes Fresno State, San Diego State and San Jose State. White announced Tuesday that classes at the state campuses will be held “primarily” online this fall. That’s not “students on campus.” So what does that mean for the Bulldogs, Aztecs and Spartans? And the Mountain West? Just one more sack of mud in the water. The California schools and the conference released a joint statement later in the day, saying that “more determinations are necessary. All three institutions will work closely with the Mountain West. No decisions on athletics have been made.”

Will the University of California system, which includes Cal and UCLA, follow suit? Sure would seem likely. Right now the Pac-12 is considering a conference-only schedule. Then we hear that Los Angeles County is likely to extend its stay-at-home order three more months. I guess they could start the season in November. But there are other Pac-12 schools that will be ready to play earlier. If it gets any weirder, maybe the teams still standing in the Mountain West and Pac-12 should just play each other. Like that would happen.

I’m surprised there weren’t more surprises in Dave Southorn’s Boise State fan survey in The Athletic. The numbers favoring a move to the American Athletic Conference were higher than I thought, though. There were 70 percent wanting the Broncos to stay in the Mountain West (most of them stipulating “if a Power 5 conference doesn’t come calling”). And 28 percent like “exhaust all options to switch conferences, starting with the AAC.” When the AAC was the Big East, I just didn’t find that appetizing. The travel would be killer, and there would be no rivalries, despite everyone’s willingness to create one with UCF. Keeping travel costs down will be priority No. 1 in the new sports world we’re going to live in anyway. The Mountain West is the best choice. Unless a Power 5 conference comes calling.

Here’s a lightning rod from Southorn. “Would you accept a change to a green field if it meant Boise State would receive a Power 5 conference invite?” It was just 51 to 49 percent in favor of keeping the Blue (and forgoing a Power 5 invite?). That’s a tough one. Boise State is a national brand for two primary reasons: its blue turf, and the exciting brand of football that has had the Broncos at or near the top of the list of winningest programs of the 21st century. Ditching the Blue for a Power 5 invite would just make them another good team with a green field. Albeit a rich one.

CALDWELL AT HIS OTHER OLD HOME

Did this one slip us by? I know it did me. Former Boise State defensive line coach Steve Caldwell has returned to Tennessee as Assistant Director of Life Skills and Character Development. Some time ago. Caldwell spent 14 years on Phillip Fulmer’s Volunteers staff in the late 90’s and 2000’s. Fulmer is now the Vols’ athletic director. Caldwell was part of two Mountain West championships and a Fiesta Bowl trophy with the Broncos, and the defensive line was a huge piece of those. Caldwell left Boise State for a second stint at Arkansas, where he was D-line coach the past two seasons. But the staff was fired in December after going 4-20 over those two years.

The MLB Draft next month is going from 40 rounds to just five. So a lot of good players are going to fall through the cracks, and they’ll be free agents now. Rustin Dodd and Andy McCullough of The Athletic decided to chart the most valuable players chosen in each of the 35 rounds that majors will go without this time around. One of them is a former Boise Hawk. We’re talking the 38th round. That’s when pitcher Scott Shields was chosen by the Anaheim Angels in 1997. Shields made his pro debut with the Hawks that summer and later put together a 10-year big league career. As a middle reliever, Shields compiled a solid 3.18 ERA. He was one of eight Hawks alums who were part of the Angels’ 2002 World Series championship team.

This Day In Sports…brought to you by COMMERCIAL TIRE…keeping you and your family on the road!

May 13, 1952: “Rocket” Ron Necciai of Bristol in the Class D Appalachian League sets an unmatched pro baseball record by striking out 27 Welch batters in a nine-inning no hitter. Necciai would be called up by the Pittsburgh Pirates later in the season but would play only that year in the majors, going 1-6 with a 7.08 ERA. 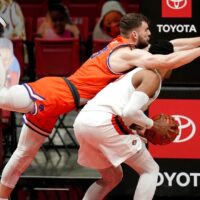