Denver opened training camp drills Thursday, and Ryan O’Halloran of the Denver Post talked about the Broncos—and quarterback Brett Rypien—on Idaho SportsTalk. And if you read between the lines, Rypien’s path is shaping up to be challenging.  Takeaways from O’Halloran’s interview: Rypien may not see the field until the fourth quarter of the Hall Of Fame game August 1 in Canton, OH.  Second-round pick Drew Lock of Missouri finally agreed to terms on his rookie deal on Wednesday, so that automatically takes reps from Rypien.  And Denver is already taking a long look at Kevin Hogan.  Check out the snaps on Day 1.  In the 11-on-11 session, it was Joe Flacco 22, Hogan 22, Lock 17 and Rypien just four.  In 7-on-7 drills, Flacco had seven, Hogan and Lock had six, and Rypien had two.

The theory is that Denver will not sit Flacco, the presumed starter, in the preseason opener.  Flacco, the veteran who came over from Baltimore as a free agent, will need live work in the team’s system after what was seen as a lukewarm performance in Thursday’s first practice.  Hogan creates a sticky wicket for Rypien as he tries to make the team.  What does the fourth-year QB out of Stanford bring to the table?  Looks like the Broncos aim to find out.  Hogan was on Denver’s practice squad last season after spending two years in Cleveland (plus training camp last summer in Washington).  He played in eight games for the Browns and started one, with so-so stats.  Rypien needs to make the most of every rep.

NO REASON NOT TO CONTINUE

Boise State senior associate athletic director Brad Larrondo said on KTIK last month that the Broncos and BYU are in discussions to extend their annual football series beyond 2023.  It would sure make sense for the Cougars.  BYU never publicly expressed interest in a football-only deal with the American conference after UConn announced it was leaving the AAC. And even if the Cougars were entertaining that idea, American commissioner Mike Aresco made it a moot point when he declared earlier this week that his conference would stick with 11 teams after the Huskies depart.  BYU, with no hint of any coveted interest from a Power 5 league, needs its ever-growing rivalry with Boise State.  If you’re counting (and you probably are) the Broncos are 5-2 against the Cougars since the current series began in 2012.

While we’re on the subject of attendance (well, I was on Wednesday, anyway), how about a case study on San Diego State basketball?  The best barometer on the health of Mountain West hoops is 12,414-seat Viejas Arena, which had an 80-game sellout streak that ended in 2017.  But while all the tickets in the arena were “sold” during that stretch, not everybody was showing up.  Mark Zeigler of the San Diego Union-Tribune conducted an arduous public records request and the found the average Viejas turnstile count last season a startling 6,868, down over 2,000 per game from four years ago.  The Aztecs announced an average of 10,686 fans per game last season. Student attendance in what they call “The Show” dropped by 50 percent over the same four-year period.

I picked Notre Dame senior Hunter Ostrom of Meridian as the player to watch this week in the 90thIdaho Men’s Amateur.  Meanwhile, KTVB’s Jay Tust did a feature on Oregon State sophomore Carson Barry of Eagle to preview the tournament.  Looks like we were both spot-on.  Barry fired a five-under 65 to forge a one-shot lead over Ostrom in the first round Thursday at BanBury.  Five other golfers were under par: Meridian’s Teegan Stephenson at -3, Meridian’s Avery Falash -2, and Meridian’s Sam Tidd, Buhl’s Kasey Crossland and 2013 champion Ty Travis of Eagle at -1.  It was a good day for Meridian (and, apparently, SpurWing guys).

This is the type of player the Idaho Steelheads relish. Forward Mitch Moroz has agreed to terms for a third season with the Steelheads.  Moroz not only returns for the third season with the Steelheads after playing 64 games for them the past two years and tallying 10 goals and 23 assists, he brings a resume full of leadership and community involvement. The 25-year-old Calgary native was named an assistant captain for the Steelies last November, and at the end of the season he was named winner of the organization’s Bill Campbell Community Service Award.  Moroz also has 147 games of AHL experience.

SALEM-KEIZER WALKS PAST THE HAWKS

Tough one for the Boise Hawks Thursday night—a 2-1 loss at Salem-Keizer.  The Hawks pitching staff allowed only four hits and struck out 10, but it walked eight batters.  With four games left in the Northwest League’s first half, Boise is 15-19 and has been eliminated from the race.  The Hawks have one more along I-5 this evening before returning home to open a three-game series versus those same Volcanoes at Memorial Stadium Saturday night.

Will Oklahoma State alumnus Garth Brooks wear a Boise State jersey at Albertsons Stadium tonight and Saturday night, even considering his beloved OSU Cowboys are coming to the blue turf in 2021?  Probably. Brooks has to play to his audience. He is a sports fan, to be sure. Brooks was a javelin thrower for the Oklahoma State track and field team in the late 1980’s, and later fancied himself as a baseball player.  Twenty years ago, he tried out with the Padres, Mets and Royals over four different spring trainings.  Brooks actually got a hit off of Mike Myers in his final spring game.  Brooks also founded a foundation, “Teammates For Kids,” that provides financial aid to children in baseball, hockey and football.

July 19, 1994, 25 years ago today:  About two hours before the start of a doubleheader between the Mariners and Orioles, the games are officially postponed before fans can enter the stadium. Four tiles from the ceiling of the Seattle Kingdome had fallen to the stands, leaving officials to declare the site unsafe. The tiles had fallen to the ground because of the stadium’s bad roofing system, which had taken on too much water.  As each of the Kingdome’s 40,000 tiles were individually replaced, the stadium was temporarily shut down, and the M’s played their next 20 games on the road. 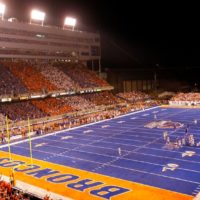