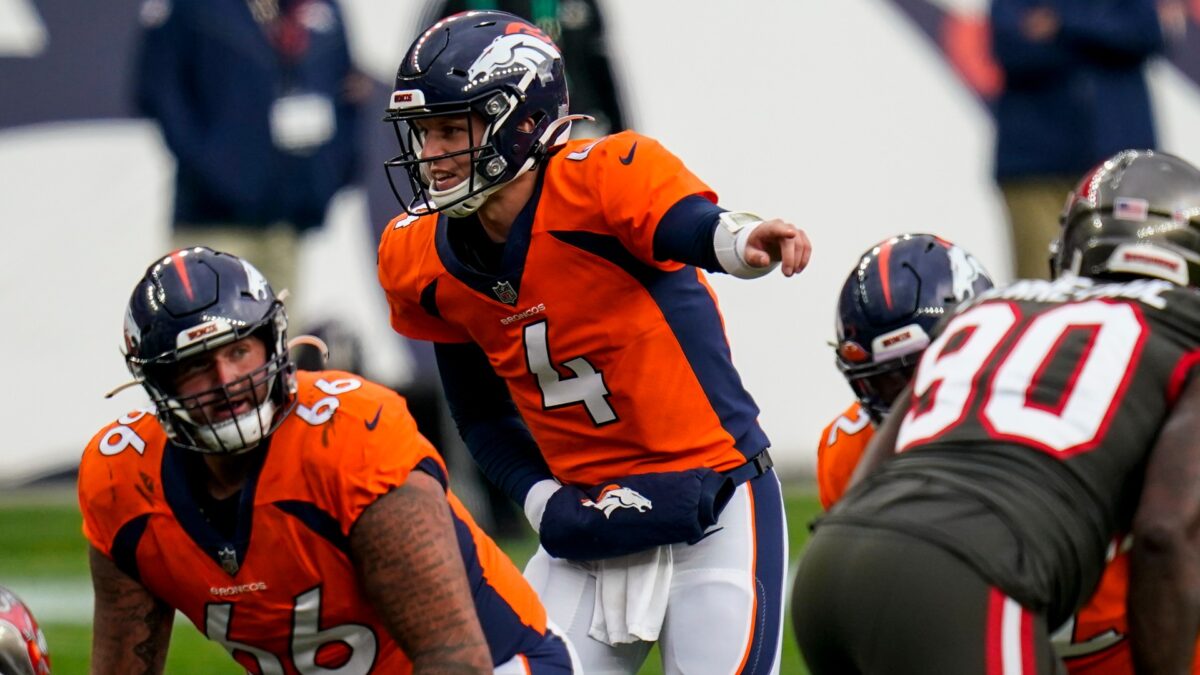 Now that quarterback Jeff Driskel has been released, Brett Rypien still has a place with the Denver Broncos. What that means will likely be determined this summer in training camp.Currently it shakes out as a QB battle between newly-acquired Teddy Bridgewater and incumbent starter Drew Lock. “The success of the offense likely depends on how well Lock or Bridgewater can guide the unit,” writes Aric DiLalla at DenverBroncos.com. “Brett Rypien remains on the team’s roster, but he would likely only have a path to a roster spot if Denver decides to keep three quarterbacks.” You could imagine Rypien eventually battling one of them for the No. 2 spot, but that’s not the conventional wisdom right now. If Denver doesn’t keep three active quarterbacks, Rypien is still eligible for a practice squad spot.

D. Orlando Ledbetter of the Atlanta Journal-Constitution is the Falcons beat writer, and he thinks former Boise State star Avery Williams has been wise in stressing his multi-faceted talents. Ledbetter starts with the basics. Path No. 1 to a roster spot is as a punt returner (and that’s the best bet). Second is as a nickelback, and Ledbetter says Williams, as a 5-9 guy, has some work to do there. But he buys into the offensive experimentation theory. “You can see with his vision in the open field that they could play him on offense,” Ledbetter said Tuesday on IST, noting that the Falcons didn’t draft any running backs last week. “If he can line up as a running back, pass-protect and go out on routes, that could be another opportunity to make the 53-man roster,” added Ledbetter. Who wouldn’t like to see that play out?

AVALOS PONIES UP FOR THE BRONCOS

Coach Andy Avalos is putting his money where his motto is. Avalos is showing he bleeds blue, as he and wife Summer have made the first of five annual $25,000 donations to become members of Boise State’s new Lyle Smith Society. The philanthropic organization aims to provide “consistent funding for scholarships, operational needs and capital projects.”

ANOTHER ELLISS GETS HIS SHOT

No Boise State players have been signed to undrafted free agent deals yet, but Idaho’s Christian Elliss caught on with the Minnesota Vikings right after the draft. Elliss, the 6-2, 230-pound linebacker, amassed 266 tackles during a four-year Vandals career that ended in abbreviated fashion this spring. He’d like to keep up the family tradition. Elliss’ brother Kaden was the last Idaho player drafted, taken in the seventh round in 2019. And his dad, Luther, the Vandals’ defensive line coach, was a first-round pick of the Detroit Lions 26 years ago and had a 10-year NFL career.

MALACHI FLYNN WAS NOT A MIRAGE

San Diego State’s Malachi Flynn was the real thing in his one season at San Diego State. At 6-1, he may be an undersized guard (in NBA terms), but that didn’t keep Toronto from taking him in the first round last fall. And on Tuesday he was named Eastern Conference Rookie of the Month for April. Flynn averaged 12.7 points, 4.1 rebounds and 4.8 assists for the month, including a career-high 22 points in a loss at Atlanta and his first double-double in a win at Cleveland. There’s a reason he was 2019-20 Mountain West Player of the Year for the Aztecs. And there’s a reason SDSU scooped him out of the transfer portal in 2018 from Washington State.

Based on the uber-talented roster he put together in his brief stay as Boise State’s coach, I think we can trust Boise Hawks manager Gary Van Tol to put a pretty good product on the field in the team’s Pioneer League debut this season. Unlike the days of major league affiliation, each team calls the shots on its roster. Van Tol was on Idaho SportsTalk Tuesday and told Prater & The Ballgame he’s one player away from a full 25-man unit. And instead of arriving in Boise a few days before the season starts, “Over a third of the guys are already in town, with more arriving this weekend,” said Van Tol.

Boise State’s Hugo Townsend, who just finished perhaps the best Boise State individual season since the Troy Merritt years, has been named to the International Team for the 2021 Arnold Palmer Cup. It’s a Ryder Cup-style competition scheduled for June 11-13 in Sugar Grove, Ill. The Swedish star and his teammates—male and female—from around the world will compete against U.S. collegiate all-stars. Townsend, ranked 17th in NCAA Division I, has posted six straight top-10 finishes, including his first-career victory at the Duck Invitational in Eugene. Last week, he finished in a four-way tie for medalist honors at the Mountain West Championship before being eliminated on the second playoff hole. Last summer, Townsend won the Idaho State Amateur and advanced to the round of 32 at the U.S. Amateur.

May 5, 2013: In the prime of his career at age 28, LeBron James of the Miami Heat becomes only the fifth player in NBA history to win four Most Valuable Player awards, joining Bill Russell, Wilt Chamberlain, Kareem Abdul-Jabbar and Michael Jordan. James and Russell are the only ones to be honored four times in five years. Abdul-Jabbar holds the record with six MVP awards—Russell and Jordan won five. Interestingly enough, James hasn’t won the trophy since.

Getting the best of Hillcrest again