What could have been. Seems odd to apply that phrase to Brock Forsey after all he did at Boise State from 1999-2002. But B.J. Rains’ “where are they now” piece on Forsey in the Idaho Press Saturday gives me an excuse to go there. The one-time walk-on out of Centennial High rushed for 4,045 yards in his career, third all-time on the Broncos list behind Cedric Minter and Ian Johnson. But bowl game statistics weren’t counted in overall stats by the NCAA until 2002, Forsey’s senior year. So his performances in Boise State’s first two Humanitarian Bowls weren’t counted. Forsey rushed for 152 yards in the 1999 H-Bowl and 68 yards in the 2000 game. Add that to his career total, and he ends up at 4,265—and voila, he passes Johnson into second place.

Forsey happened to be the Offensive MVP of the 1999 bowl win over Louisville, amassing a then-record 269 all-purpose yards. He added 173 all-purpose yards in the 2000 victory over UTEP. That’s 442 in all. That doesn’t change Forsey’s standing in the Boise State record book, as he was already No. 1 at 6,670 all-purpose yards. But add the two non-counting bowl games, and he reaches 7,112, a whopping 1,742 yards ahead of the second-place Minter.

The issue came up on a grander scale after the 2016 Las Vegas Bowl, where San Diego State’s Donell Pumphrey became college football’s all-time rushing leader. His 6,405 yards surpassed the 6,397 put up by Wisconsin’s Ron Dayne from 1996-99. But Dayne’s total didn’t count his four bowl games with the Badgers. He had three 200-yard games in the postseason and 728 rushing yards total. With that included, Dayne would sit a 7,125 yards, 720 ahead of Pumphrey. So who’s your career champ—Donnel Pumphrey, or Ron Dayne.

Dallas is all abuzz about the Cowboys’ signing of Andy Dalton from a Dak Prescott angle. Bronco Nation, of course, sees the irony in it all. Dalton agreed to a one-year, $7 million contract Saturday, two days after being released by the Cincinnati Bengals. He’ll now work for Cowboys offensive coordinator Kellen Moore, who faced him in back-to-back bowl games when they were at TCU and Boise State, respectively. The Horned Frogs ruined the Broncos’ undefeated season with a 17-16 victory in the 2008 Poinsettia Bowl, and Boise State returned the favor with a 17-10 triumph in the Fiesta Bowl following the 2009 season to go 14-0.

The two QBs were almost identical in the game in San Diego, both going 22-for-35 with no touchdowns and an interception. Moore threw for 222 yards and Dalton 197. In Glendale, Moore threw for 211 yards with no TDs and no picks. Dalton tossed for 272 and a touchdown but had three costly interceptions. Dalton is a year older than Moore and is a nine-year NFL veteran, but he’ll now answer to Kellen in the Cowboys’ quarterbacks room.

Famous Idaho Potato Bowl lore was stirred by Friday’s news that the Tennessee Titans declined to pick up the fifth-year option for wide receiver Corey Davis. His four years in the NFL have been pedestrian. Davis, the No. 5 overall pick in the 2017 NFL draft, has 142 receptions for 1,867 yards and just six touchdowns. Last season he scored two TDs during the regular season and another in the playoffs. Davis was part of the Western Michigan squad that lost 38-24 to Air Force in the 2014 Famous Idaho Potato Bowl, capping the second season of P.J. Fleck’s “Row The Boat” project. Davis made eight catches for 176 yards and three touchdowns as a sophomore. It was two years later that “those other Broncos” went undefeated and made it to the Cotton Bowl, where they lost 24-16 to Wisconsin.

RESTOCKING THE C OF I CUPBOARD

Three Idahoans and an intriguing Division I transfer make up College of Idaho’s 2020 men’s basketball recruiting class. The Coyotes picked up two first-team 4A All-Idaho players in Middleton forward Tyler Robinett and Wood River guard Johnny Radford. The Yotes also got redshirt freshman guard Jake O’Neil of Fruitland, who returns to hoops after a season on the Boise State golf team. The transfer is guard Elijah Jackson, who joins C of I after two years at Eastern Washington. Jackson, a 6-4 guard, was a Seattle All-Metro selection in 2018. The Yotes appear to have reloaded as they seek to extend the 25-game winning streak that was interrupted at the NAIA Division II Championships by the coronavirus in March.

May 5, 2010, 10 years ago today: The longest scoreless tie in ECHL history ends 36 seconds into the third overtime, as the Stockton Thunder defeat the Idaho Steelheads, 1-0. The intense duel came in Game 3 of the Western Conference Finals in Stockton after the Steelheads had taken a two games-to-none lead in Boise. Steelies goalie Richard Bachman was stellar in recording 35 saves—the Thunder’s Bryan Pitton had to reject 49 Idaho shots. The Steelheads would go on to the Kelly Cup Finals, falling to the Cincinnati Cyclones in five games. 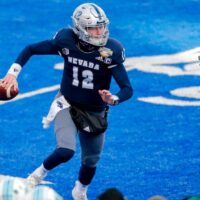 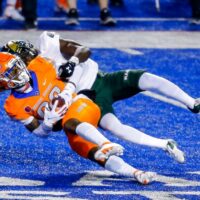