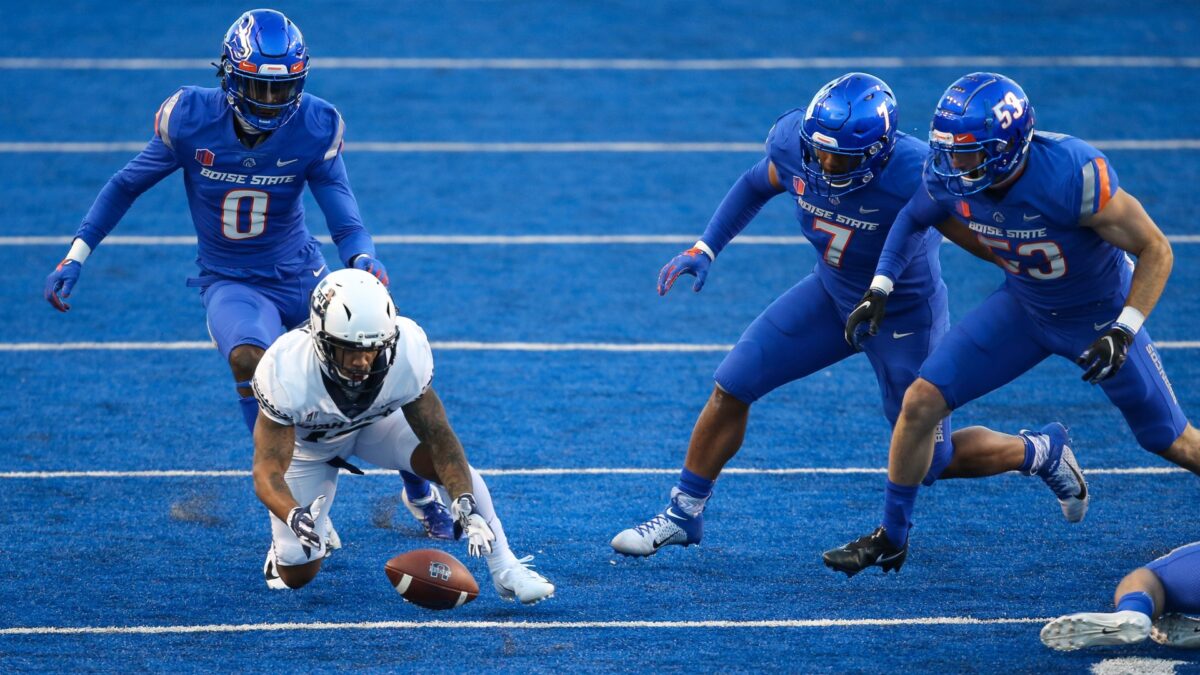 This might be Boise State’s best corps of linebackers in recent memory, and there’s no better time to prove it than at Air Force Saturday night.It’s assignment football against the triple-option, and it starts with the ‘backers. They got to stick with the plan and not let their eyes fool them. The group passed its first test against Utah State, as Zeke Noa and Riley Whimpey were the Broncos’ top two tacklers. Noa made eight stops and Whimpey seven, and each had a tackle-for-loss (Whimpey’s was a sack). Noa remembers the Falcons—it was in this game last year that his season ended with a torn ACL and a broken wrist in rapid succession. Will we see Brock Miller in Colorado Springs? The grad transfer from North Carolina State played sparingly and did not have a stat versus the Aggies.

Here are Air Force’s rushing totals during Boise State’s three-game winning streak in this series: 181 yards in 2017, 201 in 2018 and 242 last year. It’s trending in the wrong direction, but even 242 yards against a triple-option team accustomed to 300 isn’t bad. The Falcons attempted exactly 51 rushes in each of those three games and averaged 4.1 yards per carry. Inquiring minds want to know: is star halfback Kadin Remsberg, a 1,000-yard rusher last season, going to play for Air Force on Saturday? The Falcons have not revealed Remsberg’s status following the chest and collarbone injury he suffered in the loss at San Jose State last week.

Air Force has seen George Holani once. But the Falcons haven’t seen the real George Holani, who rushed for just six yards on five carries in last year’s 30-19 win over Air Force and did not have a pass reception. I have no doubt he remembers that. But let’s say the Falcons figure Holani out. Behind him is Andrew Van Buren, who had a nondescript night in the opener versus Utah State. Van Buren rushed seven times for 22 yards and a touchdown and had one catch for 10 yards. The Broncos’ only other scholarship running back, Danny Smith, did not suit up last Saturday. Khalil Shakir had three carries for 34 yards last week, and he may be in line for more.

Raise your hand if you expected to see a little more of Boise State backup quarterback Jack Sears last week. Of course, these things are often dictated by game flow (and Hank Bachmeier was playing well). But the USC transfer took the field with about six minutes left in the first half and peeled off an eight-yard run. He had another carry later in the game for no gain. Sears also completed 2-of-3 passes for 11 yards. His ability to change things up in the running game would be an advantage Saturday night against a comparatively inexperienced Air Force defense.

AROUND THE MOUNTAIN WEST

The Mountain West weekend kicked off Thursday night with Fresno State’s 38-17 win over Colorado State. The Bulldogs outscored the Rams 31-7 after trailing 10-7 early in the second quarter. We’ll find out a lot about Hawaii and Wyoming tonight. Are the Rainbow Warriors really an offensive juggernaut under new coach Todd Graham? Do the Cowboys have any offensive punch without quarterback Sean Chambers? Unfortunately for Wyoming, temperatures in Laramie have moderated since last weekend’s deep freeze. Unfortunately for Hawaii, it’s still going to be an out-of-body experience. It’s a 7:45 p.m. kickoff, with the temperature expected to be 40 degrees (dipping into the mid 30s later).

The Battle for the Fremont Cannon comes early this year, and it has a new shine to it as Nevada and UNLV will meet Saturday night. This will be the Rebels’ first game in the Raiders’ new Allegiant Stadium, albeit before only 2,000 fans due to the coronavirus. The cannon is currently painted red, as UNLV has won the past two games in the series. That means Wolf Pack coach Jay Norvell hasn’t won the state rivalry since his first season in 2017. He needs this one. It’s the first time for coach Marcus Arroyo of the Rebels, who are 13½-point underdogs.

DELAET DOWN, MERRITT UP

It’s been tough for Graham DeLaet to gain any traction since returning to the PGA Tour. The struggles continued for the former Boise State star Thursday in the first round of the Bermuda Championship—he carded a three-over 74 and is in danger of missing his fourth straight cut. The course was kinder to Troy Merritt, who shot a one-under 70. The Meridian resident is tied for 46th going into today’s second round. This is the first tournament to allow limited fans—no more than 500 a day at Port Royal—since the opening round of The Players Championship on March 12.

Boise State men’s basketball will still open the season against a likely Top 25 team, but it won’t be Top 10 like Kansas is sure to be, and it won’t carry the buzz of the Jayhawks. Jon Rothstein of CBS Sports tweeted Thursday night that, according to sources, the Broncos will play Houston in Fort Worth the day after Thanksgiving and get a second game against Sam Houston State “a few days later as part of the multi-team event.” Boise State is still trying to land more game in the area, Rothstein reports.

October 30, 2003: Boise State plays its first game ever against the most storied football program in the Intermountain West, BYU. The Broncos were greeted in Provo by a light snowstorm, but they were unfazed. Five days after scoring a school-record 77 points against San Jose State, Boise State buried the Cougars 50-12. The Broncos’ performance included four interceptions (one returned for a touchdown by Wes Nurse), a blocked punt for a touchdown, and three TDs and 209 receiving yards from Tim Gilligan.