We all wonder if we saw No. 13 for the last time on the blue turf Friday night. Will he be there next year? Could he be there in two weeks? Jeremy McNichols was certainly there against UNLV, becoming only the third Boise State Bronco ever to clock three 200-yard games in the same season. McNichols went for 206 on 31 carries and scored a career-high four rushing touchdowns in the 42-25 win over the Rebels. The McWeapon was the McPlan—he ran it 12 times in the first quarter alone and 20 in the first half. McNichols’ final carry was a dazzling 31-yard TD run. The definition of the word “final” is to be determined as it relates to the Blue.

McNichols was his typical tough-to-tackle self. After the game, UNLV safety Troy Hawthorne was asked to compare J-Mac to San Diego State’s Donnel Pumphrey and Wyoming’s Brian Hill. “Those three running backs are all great and the best in our conference, but personally I think McNichols was harder to get down than the other two,” said Hawthorne, who forced two fumbles in the game. “That’s just my experience, I don’t know about (my teammates).” Probably applies to his teammates, too. McNichols has widened his lead as the nation’s leading scorer with 26 touchdowns, and he’s passed Hill into third in the country in rushing with 1,575 yards (Pumphrey is now second).

There must have been some Senior Night yips going around, because Boise State started Friday night’s game inauspiciously. Thomas Sperbeck uncharacteristically lost a fumble 34 seconds into the game, Tyler Horton dropped an interception in the end zone on the ensuing drive that would have prevented a UNLV field goal, and McNichols fumbled at the goal line at the other end (recovered by the Broncos’ John Molchon). Things did settle down, though. The fact that Boise State was able to score 42 points on 380 yards of total offense tells you there was some field position help, and it came from special teams. Cedrick Wilson delivered the punt return everyone had been waiting for—a 73-yarder that set up a six-yard touchdown drive. Wilson also produced a 44-yard kickoff return, and the Broncos scored on that drive, too.

How many teams around the country would give anything for a winning season, much less a 10-win season? You’d hate to think that’s taken for granted around here as Boise State won its 10th game of 2016 Friday night. In 49 seasons as a four-year school, the Broncos have not only had 43 winning ones, they’ve put together 22 10-win seasons. It’s even more impressive when you pick it up in 1999, when this remarkable current run began. Boise State has posted 14 10-win seasons in 18 tries (not to mention the nation’s best record at 196-36 and the best home record in the country at 110-6).

Those Boise State numbers should be kept in mind and appreciated if the pieces don’t happen to fall into place this Friday and Saturday. Wyoming edged San Diego State 34-33 Saturday in Laramie when the Aztecs failed on a two-point conversion on the last play of the game, that after a Hail Mary had been ruled a touchdown after first being called incomplete. Great game—incredible ending—unfortunate result for the Broncos. The Cowboys now need just a win at New Mexico this week to earn another matchup with San Diego State in the Mountain West championship game.

There was upward movement in the rankings for Boise State yesterday. The Broncos are now No. 20 in AP and No. 19 in the Coaches Poll. They’re still helped by their September win over Washington State. The Cougars lost 38-24 at Colorado Saturday, their first loss since the one on the blue turf, but they’re still No. 23 in both polls. It’s Western Michigan whose hopes of a Cotton Bowl berth were boosted immensely by Wyoming’s win over San Diego State. If WMU wins out—and if the Cowboys simply make it to the Mountain West title game—the Kalamazoo version of the Broncos will be the highest-ranked champion from the Group of 5.

Boise State men’s hoops finally jelled yesterday, salvaging the final game of the Gildan Charleston Classic in a 91-70 victory over, ironically, Western Michigan. The Gem State version of the Broncos led by four points at the half and then exploded after the break while shooting 59 percent from the field. Coach Leon Rice plugged Paris Austin back into the starting lineup, and the sophomore responded with 17 points, six rebounds and seven assists. Austin was perfect from the field (6-for-6) and from the free throw line (5-for-5).

Then there was Chandler Hutchison, whose been stellar out of the gate and was named to the all-tournament team in Charleston. Hutchison turned in his third double-double in four outings yesterday with 20 points and 12 rebounds. In fact, it’s also his third 20/10 effort of the young season. Boise State will be back in Taco Bell Arena Friday against Presbytarian College.

Elsewhere on the court: the College of Idaho men swept their two games in the 30th annual Taco Bell Shoot-Out, beating Colorado Christian 76-69 and routing Portland Bible 97-43. NNU split with the same two teams in the tournament. And the Boise State women rallied for a 73-68 win over Seattle University in overtime yesterday at Taco Bell Arena. The Broncos, who trailed by 16 points in the first half, were spurred by Brooke Pahukoa in their comeback. The senior star scored eight of Boise State’s final 11 points in regulation and in overtime and had 16 for the game.

The Idaho Steelheads appear to have found their way, coming home from Norfolk with two wins in three games. Special teams have been serving the Steeheads well during a surge that has seen them win six of their last eight games. The game-winner in Saturday night’s 4-1 victory over the Admirals came on a power-play goal from Jefferson Dahl. Idaho has now scored on the man-advantage in 13 of 16 games this season. The penalty kill was also 6-for-6 in the three-game series at Norfolk. Goaltending is also getting into a groove—the Steelies’ Landon Bow wrapped up the series Saturday with 35 saves in 36 Norfolk shots-on-goal, 15 of them in the third period. The Steelheads return home Friday night against the defending Kelly Cup champion Allen Americans.

Campus things: The Boise State women’s volleyball team is headed to its first NCAA Tournament after clinching the Mountain West championship with a sweep of Wyoming in Laramie Saturday. The Broncos, who have won 13 straight matches, close out the regular season tomorrow night at home against Air Force. The Boise State men finished 19th Saturday at the NCAA Cross Country Championships, led by Yusuke Uchioshi in 18th-place, the best men’s result by a Bronco at nationals in 20 years. The Broncos’ Brenna Peloquin finished sixth in the women’s field to earn her fourth All-American honor between cross country and track. And the College of Idaho men and women were fourth and sixth, respectively, at the NAIA Cross Country Championships.

Bronco Stadium’s first crowd of 30,000-plus gathers for the 28th meeting between Boise State and Idaho, and it stays until the end—and beyond. The wild offensive affair went into overtime, where both teams scored touchdowns. After Idaho’s TD, Vandal coach Chris Tormey called timeout and then rushed his offense back on the field for an all-or-nothing two point conversion. Joel Thomas scampered into the corner of the end zone, giving Idaho a 36-35 win. It would be the Vandals’ last win in the rivalry, as the Boise State streak stands at 12. The Broncos would go on to win their next 47 conference games on the blue turf, with the streak ending in a 36-35 loss to TCU in 2011. 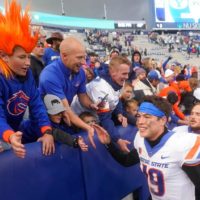