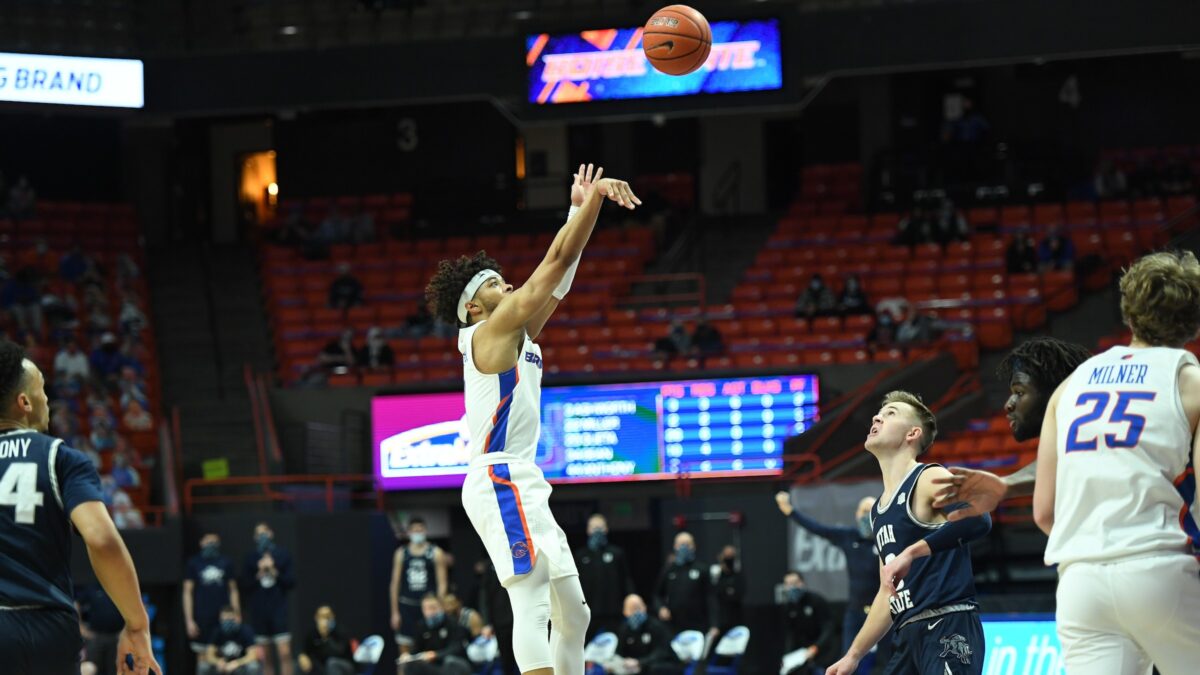 It was good news-bad news as Derrick Alston was pretty close to a one-man show last Saturday against UNLV. The Broncos survived, but they really missed the production of their starting guards. Alston shined again in Wednesday’s win over Utah State, but Marcus Shaver Jr. and RayJ Dennis were noticeably back in town. Shaver posted his first double-figures performance of the past five games, scoring 12 points, eight of them consecutively during the run that turned a 63-62 lead into a 71-64 advantage. Dennis still hasn’t reached double-figures in the last eight games, but he put up eight points Wednesday—and all of them came in the second half. The key: he was 2-for-4 from three-point range after enduring a 3-for-21 stretch from deep over the past five weeks. Now to sustain it tonight in Game 2.

THE BENCH WAS BACK

Devonaire Doutrive was inactive due to a “dental emergency.” So what would that mean for Boise State’s bench scoring after Doutrive contributed nine of the Broncos’ 16 bench points last Saturday against UNLV? Well, others stepped up, and we’re not talking the three points from Emmanuel Akot. Max Rice had his best game since January 11, scoring eight points and draining the three-pointer that pulled Boise State into a tie with 11 minutes left. The surprise was Lukas Milner, the junior college transfer whose minutes have been slowly increasing. While having to deal with Utah State seven-footer Neemias Queta, Milner figured out a way to score six points, including a layin that basically clinched the win with a minute and a half left. If Doutrive isn’t on novacaine tonight, the bench could be big.

Offensive lineman Jake Stetz was one of Thursday’s Boise State “super seniors” doing their media thing. Stetz told reporters that Brad Bedell, his former O-line coach, advised him to consider entering the 2021 NFL Draft. Stetz, of course, elected to return to the Broncos for a 2021 season that could pay dividends. We don’t know Bedell’s version of events, but Stetz hasn’t been on the radar—yet, anyway—as an NFL prospect. He has started just one season at right guard, and that was an abbreviated one. We’ll see where his new position coach, Tim Keane, can take him.

An excuse to tell Marcel Yates’ back story again as the former Boise State defensive coordinator is set to take over as safeties coach at Oregon, according to FootballScoop.com. Yates spent last season as secondary coach at Cal after being fired as Arizona defensive coordinator in 2019. This is about his beginnings in Boise 25 years ago, not the legal troubles spawned by his car dealership five years back. Yates joined the Broncos’ program in 1996, its first in Division I-A, after University of the Pacific dropped football. He was among the freshmen that year (Bryan Harsin included) who endured a 2-10 season while Pokey Allen was battling cancer. And he was among the seniors who won the Big West championship and Boise State’s first bowl game in 1999, when the Broncos’ current run began. It never gets old.

MERRITT UNDER PAR AT RIVIERA

This has been as busy a stretch as I can remember for Meridian resident Troy Merritt on the PGA Tour. Merritt is playing in his sixth straight tournament—which includes every one since the 2021 portion of the season began. And, coming off his best finish of the season last week at the AT&T Pebble Beach Pro-Am, he was steady Thursday in the first round of the Genesis Invitational, the event once known as the Los Angeles Open. The former Boise State standout shot a one-under 70 at Riviera Country Club and is tied for 34th.

In Thursday’s Scott Slant column, I mentioned two of the 10 freshmen on the Boise State women’s roster this season. One of them was not Mary Kay Naro. So here’s what happened Thursday night at Utah State. Naro went 1-for-6 from the floor and scored three points. She pulled down five rebounds, so that’s good. Now, are you sitting down? Naro dished out a school-record 16 assists, breaking the mark shared by Marta Hermida and Jayde Christopher. That helped five of Naro’s teammates reach double-figures, led by Jade Loville’s 20 points. The 16 assists were also a Mountain West freshman record and were the most in a conference game by any player in MW history.

College of Idaho hasn’t played nearly as many games as it would have liked (both of its regular-season games against Lewis-Clark State were canceled), but at least the Coyotes have been playing, and there’s a payoff. The Yotes and L-C State are the only two Cascade Conference teams to take the court this season, so they’re finally facing off in a three-game series to determine who gets the conference’s automatic berth into the NAIA Tournament. In Game 1 in Lewiston Thursday night, the Warriors edged C of I 74-71 in a thriller. Game 2 is scheduled for Sunday evening at the J.A. Albertson Activities Center. The site of Game 3, if necessary next Saturday, will be decided by a coin flip.

Having not played a counting game in almost three weeks, Northwest Nazarene is champing at the bit to get on the floor for its scheduled games against Saint Martin’s tonight and Saturday in the Johnson Events Center. And these could be key in relation to NNU’s NCAA Division II Tournament hopes. The NCAA released its first Division II regional rankings for men’s basketball on Wednesday, and the 8-1 Nighthawks are on the list for the West Region, among eight teams listed as “under consideration.”

February 19, 1996, 25 years ago today: Phoenix Suns star Charles Barkley becomes just the 10th player in NBA history with 20,000 points and 10,000 rebounds when he grabs 14 boards in a 98-94 victory over Vancouver. Barkley, also known as “Chuck” and “Sir Charles,” lived up to his nickname, the “Round Mound of Rebound.” Before he became famous as a quotable studio analyst, Barkley was an 11-time NBA All-Star and was named Most Valuable Player in 1993. He was also named to the NBA’s 50th Anniversary All-Time Team.