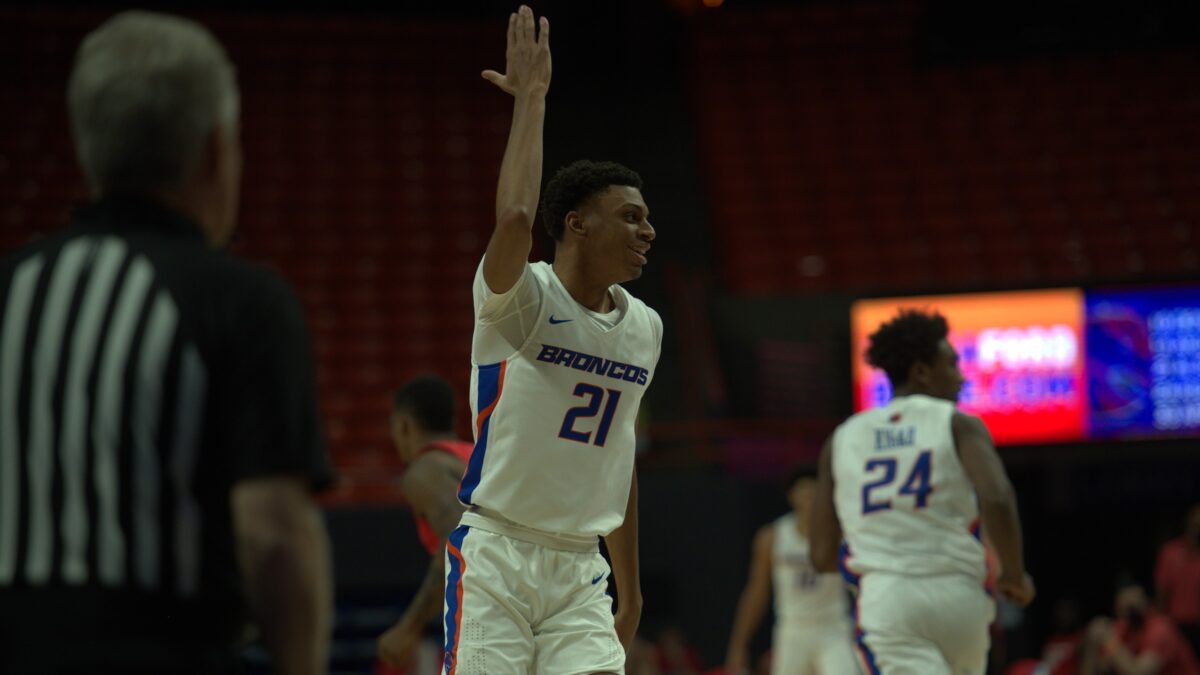 One wonders: was the Las Vegas line on Monday night’s Boise State-New Mexico game laid down before or after oddsmakers knew Devonaire Doutrive would still be ineligible for the Broncos? Boise State was favored by 9.5 points with Doutrive still in street clothes in ExtraMile Arena. Well, without Doutrive (and Marcus Shaver Jr.), the Broncos blasted New Mexico 77-53. It’s hard to pick out one luminary, but Derrick Alston Jr. was especially good. Alston scored nine straight points midway through the second half to put the game away for good. That was part of a 25-5 run that gave Boise State a 63-39 lead. He had 20 for the game.

Boise State shot 58 percent from the field while placing four players in double-figures. Joining Alston were RayJ Dennis with 16 points and Abu Kigab and Emmanuel Akot with 12 apiece. Akot had a really well-rounded game, adding eight rebounds, four assists, two steals and a block. As good as the Broncos were on the offensive end, they laid down some defense to match, making a season-high 10 steals and holding New Mexico to 34 percent shooting from the field. The other big factor was rebounding. The Lobos came into the game No. 1 in the nation in rebounding margin at plus-31 per game. Boise State won the battle of the boards 35-29.

ARMY’S ANGUISH AS IT RELATES TO BOISE STATE

Army coach Jeff Monken was overcome by the bitter disappointment of not making a bowl game Sunday with a 9-2 team, while teams like 2-8 South Carolina are going bowling. But he saved his wrath for teams that opted out. Boise State was reportedly a replacement candidate for USC in the Independence Bowl, which had Army slotted in but has since been cancelled. The Broncos said no to a bowl game. “Boise State opted out today,” said Monken Sunday. “They lost their championship game yesterday. So they went from being their conference champion and representing their conference in a bowl game to opting out? You couldn’t go one more week and play us?” Well, no. Like USC, the Broncos were just at the end of their rope. But stop presses—Army is going to replace COVID-stricken Tennessee in the Liberty Bowl.

The latest email reveations through BoiseDev.com’s public records requests (shared with the Idaho Press) show that Boise State had conversations with the American Athletic Conference as early as August about moving its football program. University president Dr. Marlene Tromp apparently made contact with the AAC, which said it would be interested only in football. That put Boise State between a rock an a hard spot regarding its other sports, with no viable home for them. Then-AD Curt Apsey suggested it could work someday with other schools in the West involved, and senior associate athletic director Brad Larrondo did some math showing how it might work for the Broncos. Meanwhile, Dennis Dodd of CBSSports.com reports that sources tell him the AAC is indeed considering a Boise State football-only membership.

The next issue for Boise State football is roster churn. There is going to be some between now and spring football. It’s still not determined (that we know of) how the program is going to handle the “super seniors,” this year’s seniors who want to use the extra year of eligibility granted by the NCAA. Will the retention of some of those affect decisions made by younger players on the roster? Then there are the mystery men, quarterback Jack Sears and wide receiver Octavius Evans, who have been absent without explanation. Evans hasn’t even been on the depth chart since he made a touchdown catch at Air Force. Sears has been listed as the backup QB, for what that’s worth. He was not on the travel squad the past two weeks after it was indicated he was ready to return at the beginning of the month.

THE WOLF PACK ON THE BLUE

Nevada is looking for its first win of any kind on the blue turf since 1997 as it takes on Tulane this afternoon in the Famous Idaho Potato Bowl. Not only has the Wolf Pack gone 0-9 against Boise State since then, it has lost to Miami, Maryland and Ohio in the various incarnations of Boise’s bowl game. The Pack lost to Ohio 30-21 last year. This time, Nevada is a 2.5-point underdog to the Green Wave, but it appears to be anybody’s ballgame. It could be higher-scoring than last year, as Tulane averages 35.4 points per game. Not forgetting that Nevada’s Carson Strong is one of the nation’s top 10 passers.

Tulane’s status as the favorite today could be affected by missing persons on the defensive line (sound familiar, Bronco Nation?). The Green Wave, who didn’t arrive in Boise until about 5 p.m. Monday, will be without the nation’s leader in sacks, Patrick Johnson, whose father just passed away. Also out is starting noseguard DeAndre Williams, who’s awaiting the birth of his first child. Without those two, maybe Nevada’s offensive line gives Strong a lot of time, and maybe Strong, the Mountain West Offensive Player of the Year, carves up a Tulane defense that is giving up 279 yards per game through the air.

BYU didn’t get the New Year’s Six bowl it coveted, derailed by a loss at Coastal Carolina 2½ weeks ago. On the other hand, the Chanticleers didn’t make the NY6 either in the most exclusionary College Football Playoff process ever. The Cougars still got a good matchup, as they face UCF today in the Boca Raton Bowl. UCF can light it up, but the Knights get lit up as well, so this should be entertaining, shootout style. It’s expected to be the final game in Zach Wilson’s BYU career, as he’s in line to be a first-round NFL Draft pick. Wilson has thrown for 3,267 yards and 30 touchdowns against just three interceptions this season and has completed 73.2 percent of his throws. Wow. The Cougars are favored by 6.5 points.

December 22, 2010, 10 years ago today: Boise State’s season of highest expectations ends with only one blemish, as the Broncos blast Utah 26-3 in the Las Vegas Bowl. The tide turned in the second quarter on an 84-yard touchdown run by Doug Martin, the longest play in Las Vegas Bowl history and the Broncos’ second-longest run ever. Kellen Moore was the game’s MVP, throwing for 339 yards and two touchdowns. One of them went to senior Austin Pettis, who had a career-high 12 catches for 147 yards in his final game as a Bronco. Boise State finished the season at 12-1 and was perhaps the best team in school history, despite an upset loss at Nevada that kept it out of the Rose Bowl.