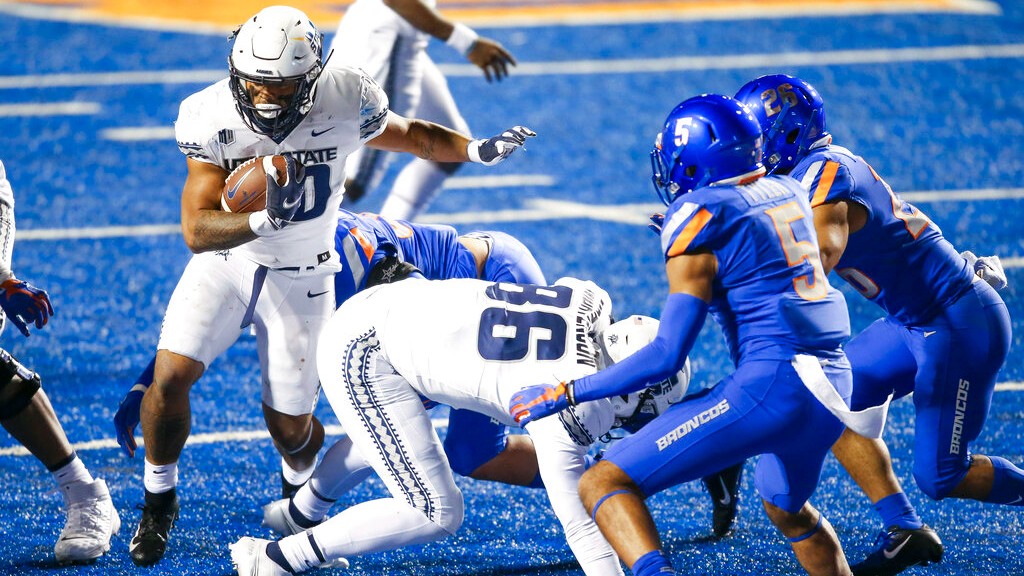 Running back Jaylen Warren was one of the only bright spots for Utah State in a 42-13 loss to Boise State in last year’s season opener, rushing for 89 yards and both of the Aggies’ touchdowns. Well, Saturday night, Warren will be right back on the blue turf as an Oklahoma State Cowboy. He took advantage of the extra year for COVID granted by the NCAA and transferred to OSU, and he has two of the Cowboys’ three rushing TDs this season. Warren, however, is averaging only 2.6 yards per carry so far, as is fellow running back LD Brown. The running game has been odd for OK State. The leading rusher is quarterback Spencer Sanders with 62 yards and 6.2 yards per carry. It’s weird for the Broncos, too, though. Their leading rusher is fourth-string back Tyler Crowe with 45 yards, all against UTEP.

RAISE YOUR HAND IF YOU REMEMBER THIS GUY

Let’s revisit this Boise State-Oklahoma State angle from three years ago. OSU offensive coordinator Kasey Dunn was the 2017 FootballScoop Wide Receivers Coach of the Year after leading a crew that featured two 1,000-yard receivers and four 500-yard receivers. And he was a pretty good one himself in his day. Dunn was a three-time Division I-AA All-America wideout at Idaho from 1987-91 and still holds Vandal career records with 287 catches and 3,847 receiving yards. He always played well against the Broncos (and yes, the turf was blue when he faced them). Dunn is in his 11th season under Mike Gundy with the Cowboys. His previous coaching stops include Southern Miss, the Seattle Seahawks, Baylor, Arizona, TCU, Washington State, New Mexico, Idaho and San Diego.

WHAT ABOUT THEM COWBOYS?

The season has been very odd for Oklahoma State so far. The Cowboys come to the blue turf this Saturday with a No. 23 ranking in the Coaches Poll (they’re on the “Others Receiving Votes” list in the AP Poll). This comes after a seven-point win over FCS Missouri State and a five-point win over Tulsa, which lost to Dan Hawkins and UC Davis in Week 1. OSU was actually up one spot on the Coaches list. Of course, that leads us to the odds at USA Today. And Boise State is favored by 4½ points. So you’re tellin’ me there’s a chance? Certainly.

Boise State may not be getting everything it can from Oklahoma State out of the computers right now, but there are other teams working in the Broncos’ favor. Boise State’s three West Division opponents in the Mountain West this year, Nevada, Fresno State and San Diego State, are looking more formidable by the day. The Wolf Pack is the top vote-getter among Mountain West schools in the polls, the Bulldogs lost by seven to Oregon the week before the Ducks upended Ohio State at the Horseshoe, and the Aztecs made big strides between a lackluster Week 1 win over New Mexico State and their rout of Arizona in Tucson last Saturday. And after BYU’s takedown of Utah, the Cougars debuted at No. 23 in both polls on Sunday. Winning out with this schedule would surely be impressive for the Broncos.

It’s still early, but it looks like Oregon State will at least compete in the Pac-12 this season. OSU will certainly do that Saturday when it hosts Idaho in Reser Stadium. The Beavers lead the conference in offense at 460.5 yards per game and in passing with 293.5 yards per outing. But they’re hardly one-dimensional. Running back B.J Baylor leads the Pac-12 wit five rushing touchdowns and notched a career-high 171 yards last week against Hawaii. Oregon State and Idaho used to to regular foes in the old Pacific Coast Conference, but this is the first time they’ve met since 2006, when—in his one year back at Idaho—coach Dennis Erickson made a not-so-triumphant return to Corvallis, the scene of much success, and was handed a 38-0 loss.

YOTES REGROUP FOR THE RAIDERS

College of Idaho has had an extra week to think about the loss to Rocky Mountain that snapped its 11-game home winning streak. The Coyotes are right back at Simplot Stadium Saturday to host Southern Oregon, which is 1-1 after opting out of the COVID-delayed and abbreviated spring season. The defeat to the Battlin’ Bears was frustrating, because the Yotes offense was rolling, putting up 306 yards on the ground and 525 overall. Wide receiver Hunter Juarez recorded his ninth career 100-yard game, tying the school record set by NAIA and San Francisco 49ers Hall of Famer R.C. Owens from 1952-54.

CATCH ‘EM WHILE YOU CAN

It’s going to be a beautiful night for baseball, and it could be your last chance to see the Boise Hawks this season. The Hawks face elimination tonight as the Missoula Paddleheads try to win the Pioneer League Championship Series at Memorial Stadium. Missoula took Game 1 of the best-of-three series Monday night, 8-2. A Boise victory would force the deciding Game 3 on Thursday night.

September 15, 1951: The birthday of a football coach whose inauspicious beginning belied the success he would have later in his career. After nine years as an NFL assistant, Pete Carroll became head coach of the New York Jets in 1994 and was fired after a 6-10 season. A later three-year stint leading the New England Patriots produced a 27-21 record before he was fired again. Carroll would hit paydirt in a nine-year run at USC, and he parlayed that into his current perch with the Seattle Seahawks. Carroll is one of only three coaches who have won both a Super Bowl and a college football national championship. Pete Carroll, currently the oldest coach in the NFL…70 years old today. 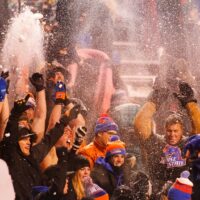 This Day In Sports: The notorious 9-degree game on the Blue