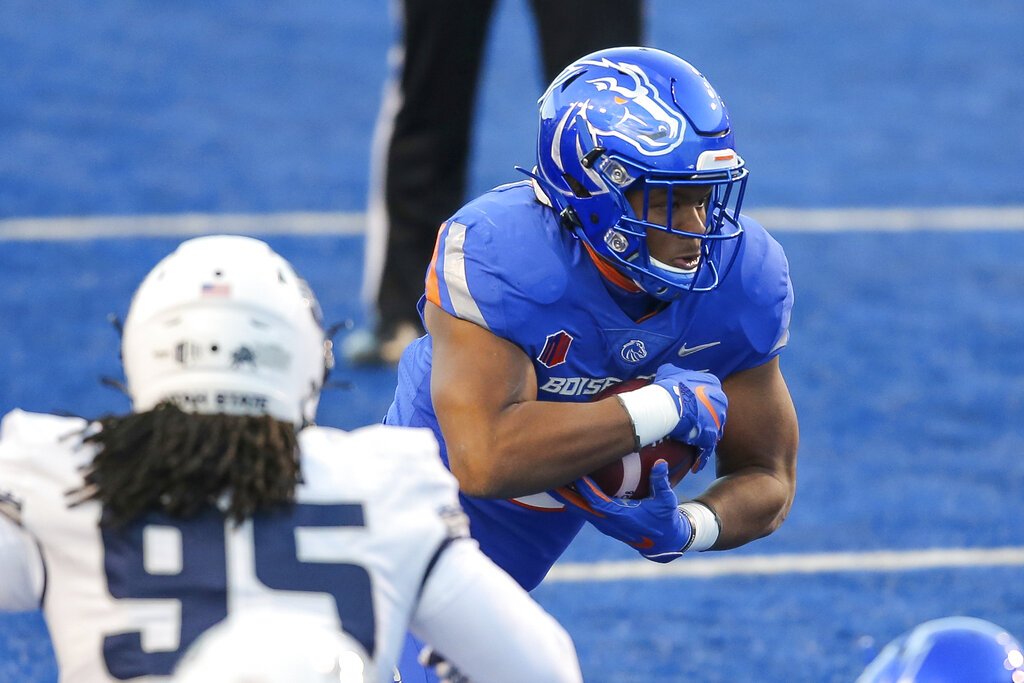 So much happened in January that this has kind of snuck up on us. Wednesday is National Letter of Intent Day in college football. It isn’t what it used to be, as most of the activity these days occurs around the early signing day in December. But there are some significant holes to fill at Boise State, not the least of which is at running back. If 2020 taught us anything, it was that the Broncos were devoid of depth in the backfield. When George Holani was injured five quarters into the season, Boise State was left with Andrew Van Buren to carry the load—and more was needed. In the committee days, the Broncos sometimes had a three-pronged running attack. Last season there was one prong left.

Boise State had a 2021 commitment from highly-touted prospect Eli Sanders, but he neglected to sign in December—then decommitted a few days after Bryan Harsin left for Auburn. It wasn’t so much Harsin’s departure. It was more because of the Power 5 offers that started pouring in, and Sanders ended up going with Iowa State. So the Broncos need to mint a running back, and if it’s not Wednesday, it’s presumably off to the transfer portal.

MOLCHON & MURRAY BEHIND THE SCENES

Unless something strange (as in, an injury) happens in practice this week, former Boise State standout John Molchon won’t be playing in Super Bowl 55 for Tampa Bay this Sunday. But as a member of the Buccaneers practice squad, Molchon is in line for a Super Bowl ring if Tom Brady and crew can work some magic against Kansas City. Molchon’s role, as it has been all season, is to help give the Bucs defense the best possible look at the Chiefs attack. “Thankfully we’ve played them before, so I have a good idea of how to simulate the offense,” Molchon told Prater & The Ballgame Monday on KTIK’s Idaho SportsTalk. As for Brady, Molchon says he is easy going, in control and “amazing to watch.” Molchon is 23, and Brady is 43.

There’s another former Bronco involved in Super Bowl prep for Tampa Bay—or at least in how this team was put together. One-time Boise State defensive back Antwon Murray, who played from 2010-11, is a Buccaneers’ area scout and has been with the organization for five years. In fact, Molchon said it was Murray who reached out to him after the NFL Draft last spring, leading to his free agent signing with Tampa Bay. And next thing you know, Molchon was going up against the likes of Ndamukong Suh, Jason Pierre-Paul, Will Gholston and Shaq Barrett in practice. “It’s difficult, and I wouldn’t want it any other way,” said Molchon. “It’s helped me grow, and it’s made me a better football player.”

Unlike the NCAA NET rankings (which are ultimately more important), Boise State men’s basketball paid a heavy price in poll voting this week. When you count past the Top 25 in the “also receiving votes” category in the AP Poll, the Broncos are 31st. But they dropped from 108 points to 23, so there’s a lot of ground to make up. They experienced a proportionate drop in the Coaches Poll. If the polls are important, Boise State must sweep Nevada this weekend in Reno. The only other Mountain West team getting votes is San Diego State, with six points in the AP Poll. But man have the Aztecs been ripping it the past four games.

INGREDIENTS OF THE RECOVERY

There were some things that had to happen if Boise State was to keep the miserable Wednesday last week from dragging its season down. On Friday night, the Broncos had to get to moving the ball again, and they dished out 18 assists, with eight different guys loggng at least one. Boise State had to shoot well from three, and it did, going 9-for-21 for 42 percent,the second-highest percentage outside of ExtraMile Arena this season. And the Broncos had to defend. Abu Kigab led the charge there with four blocked shots, his second game with at least four blocks this season. Kigab joins Ryan Watkins as the only Broncos with multiple four-block games in the last decade.

A SMATTERING COULD MATTER

Boise State announced Monday that beginning with this weekend’s women’s basketball homestand against Nevada and this Saturday night’s gymnastics meet versus Utah State, the university will allow a small number of fans in ExtraMile Arena. The count will be limited to immediate family members of Broncos student-athletes and coaches. This arrangement is similar to the one employed at Albertsons Stadium for the Broncos’ three home football games (all those were well before Thanksgiving, after which COVID-19 cases began to skyrocket). Even such a small number can make a difference in what has been a silent arena. You know that family members will bring enough energy for a group five times as big.

GREGORY GETS THE UW DC GIG

Bob Gregory, the two-time former Boise State assistant coach, has been promoted to defensive coordinator at Washington. He replaces Pete Kwiatkowski, another former Broncos assistant (and player to boot) who left last week to become D-coordinator at Texas. Gregory has been on the Huskies staff since leaving Boise State with Chris Petersen after the 2013 season. Technically, Gregory was 0-1 as a Broncos head coach. After Petersen departed, he stayed behind to serve as interim coach for the 2013 Hawaii Bowl, where Boise State fell 38-23 to Oregon State. There are four other ex-Broncos staffers still coaching at UW: head coach Jimmy Lake, offensive line coach Scott Huff, running backs coach Keith Bhonapha, and wide receivers coach Junior Adams.

February 2, 2001, 20 years ago today: Equaling her own outdoor world record in the women’s pole vault, Pocatello’s Stacy Dragila sets a new indoor record by clearing 15 feet, 2¼ inches at the Millrose Games in New York. Women’s pole vault had become an Olympic-sanctioned event the year before, and Dragila had won the first-ever gold medal in Sydney. She was at the peak of her career and was easily the sport’s most popular performer.