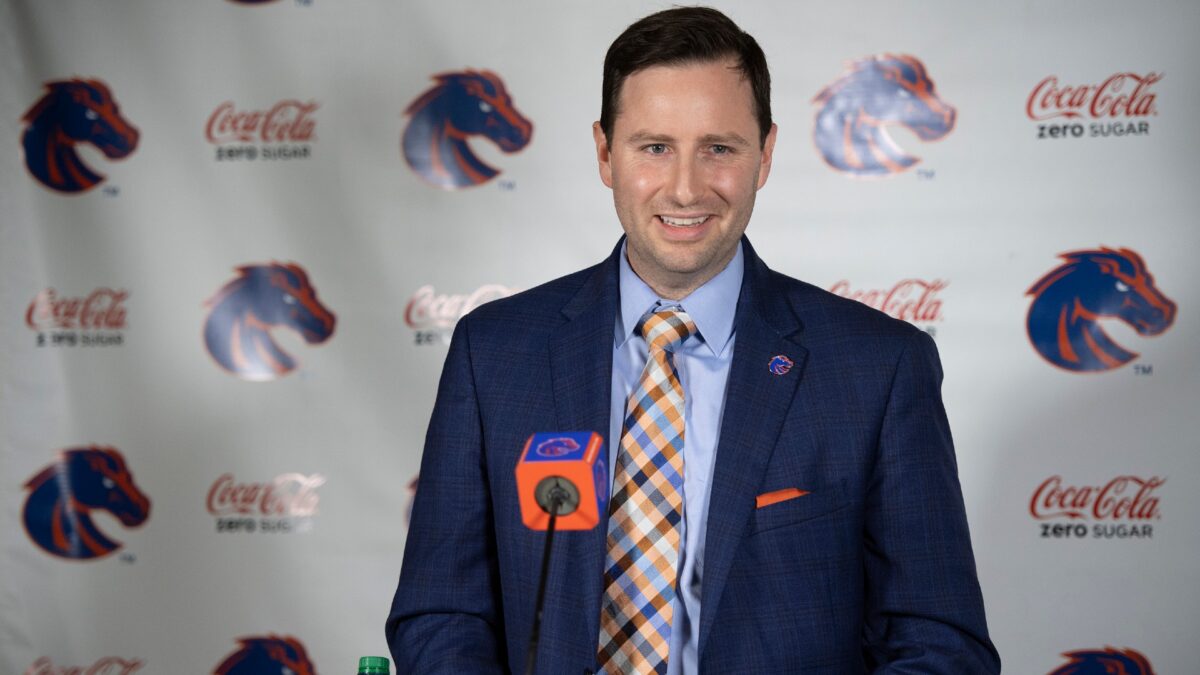 During Jeramiah Dickey’s interview on KTIK last week, the new Boise State athletic director talked about dealing with the “controlables” before the university can allow its eye to wander to the American Athletic Conference and such. And tucked in behind that comment was this. “We need to fill those stadiums,” said Dickey. “That is an expectation. We need to sell out six football games.” That’s an enlightening statement. Dickey knows it’s crucial for not only revenue, but perception. Football attendance peaked in 2012 at 35,404 fans per game (as did season ticket sales). As memories of Coach Pete faded, so did the turnstile count, although it hasn’t dropped off the cliff (the average in 2019 was 33,488, pre-Mountain West championship).

The thing is, the numbers should be at 2012 levels just by osmosis. Boise State has not been able to capitalize on the Treasure Valley’s explosive growth. Is Dickey the one who can figure out how to do it? I think he gets it. The Boise area has experienced waves of growth for the past 50 years, although there’s been nothing close to the current one. But in the 1970s, people would move in from California (for example) with allegiances to the Raiders, 49ers, Rams, Cal, Stanford, USC, UCLA, etc. The Broncos were playing an exciting brand of football under coach Tony Knap, and the newcomers adopted Boise State as their new home team, growing the fan base significantly. It’s harder to do in today’s medic-centric world. But there’s no better opportunity than the one here. This will be a true test of the Broncos’ brand strength.

HAWK VS. THE VANDALS

Dan Hawkins returns to the Kibbie Dome Saturday as head coach of UC Davis for a Big Sky tilt against Idaho. It’s not like Hawkins has been in Moscow a lot, though. In fact, he’s only coached there once, in Boise State’s 24-10 win over the Vandals in 2003 (his only other road game versus Idaho was played in Martin Stadium in 2001). Hawk is 6-0 against Idaho—his Broncos went on to score 65 and 70 points against the Vandals in his final two seasons in Boise, and his Aggies won 44-21 in Davis in 2018. Saturday’s game will have an interesting dynamic. Idaho is coming off its thrilling 28-21 upset of Eastern Washington, while UC Davis is playing its first game since November 23, 2019.

There’s a lot of mending going on with Boise State men’s basketball team after the deflating loss to Fresno State Tuesday night. Most of it is between the ears, as a hole has been punched in this season’s dreams. Physically, it’s all about Abu Kigab. If the Broncos are going to make that unlikely run through the Mountain West Tournament next week, Kigab is a key ingredient. But with 12½ minutes left in the game against the Bulldogs, Kigab went down with a shoulder injury. He headed for the locker room—then returned to the bench with his arm in a sling and his shoulder in an ice pack. It did not look good. Kigab had gone through Senior Night ceremonies, still unsure if he’s going to take advantage of the NCAA super-senior waiver.

Now that reality has set in and social media has calmed down (kind of) in the wake of Tuesday night’s stunner, what was it that set everybody off about it? Well, expectations were so high. This team has been hyped for a year, with the narrative revolving around a can’t-miss combination of Derrick Alston Jr., RayJ Dennis and a slew of transfers including Emmanual Akot and Devonaire Doutrive from Arizona. It was going to make the NCAA Tournament (it still can)—and win a game there for the first time. Then came the school-record 13-game winning streak against the softer part of the schedule. Fans suddenly feel like they’ve been led down the primrose path after what has happened the past week. But the talent is real. Can it translate into redemption next week?

San Diego State won the game it didn’t want to play Wednesday night, beating UNLV 71-62 in Las Vegas. With the victory came a second straight Mountain West regular season championship and the No. 1 seed in the Mountain West Tournament. It’s time to acknowledge the job Brian Dutcher has done at SDSU. Dutcher is in his fourth season as head coach since succeeding the legendary Steve Fisher and has kept the Aztecs in the driver’s seat as the flagship men’s hoops program in the conference. He officially came out from under Fisher’s shadow last season when he guided the Aztecs to a 26-game winning streak and a 30-2 record, peaking at No. 4 in the AP and Coaches Polls. With its record improving to 20-4 now, San Diego State has gone 50-6 the past two seasons.

‘LATE-WINTER CAMP’ AT C OF I

College of Idaho football is deep into the COVID equivalent of fall camp as the Coyotes prepare for their abbreviated season. The Yotes open a week from Saturday against Montana State-Northern at Simplot Stadium, and Question No. 1 is: who will be under center for the Coyotes? C of I last played way back on Thanksgiving weekend, 2019, when its run in the NAIA Playoffs ended. That’s when the Yotes’ most prolific quarterback ever, Darius-James Peterson, played his final game. The top candidates to replace him are junior Nathaniel Holcomb and sophomore Jacob Holcomb. And yes, they are brothers.

March 4, 2008: Legendary Green Bay quarterback Brett Favre announces his retirement after 17 NFL seasons. Seriously. Favre had just completed one of his best seasons in a career that included two Super Bowls and NFL records for passing yards, touchdown passes, wins, and—most impressively—275 consecutive starts. Favre, of course, would reneg and play one final season with the New York Jets in 2008. And then he’d reneg again and play two more final seasons with the Minnesota Vikings. Former Boise State star Korey Hall had started at fullback in his rookie season alongside Favre, and Broncos great Daryn Colledge was a Packers offensive line starter during Favre’s final two campaigns in Green Bay.