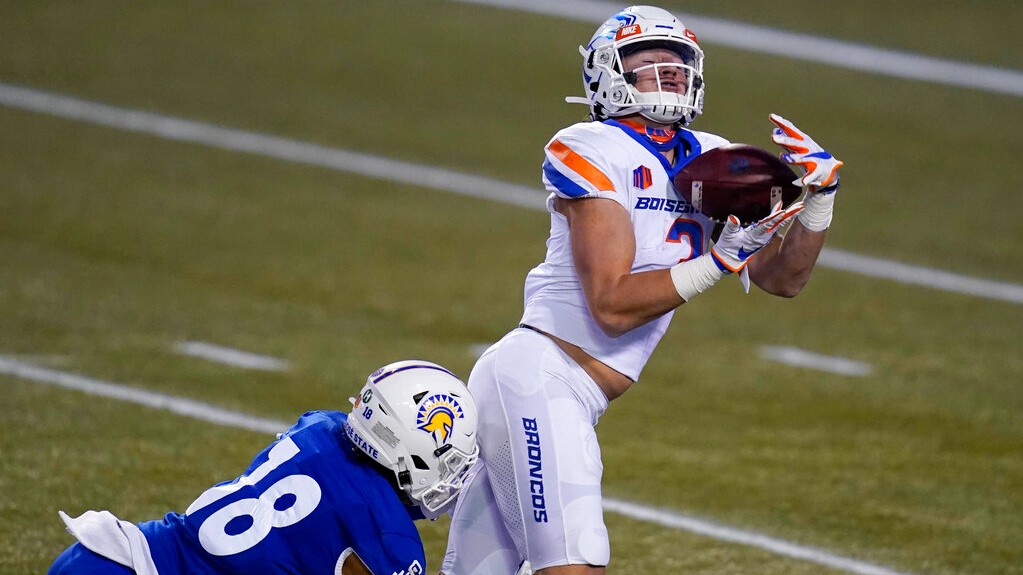 Yes, John Bates is off to the Washington Football Team. But Boise State has so much talent at tight end, it’s going to be fascinating to see what happens there, and how that figures in to offensive coordinator Tim Plough’s offense. Riley Smith, the one-time quarterback, is now the feature performer at that spot. Smith had 15 catches for 155 yards and a touchdown last season, more than Bates on all three counts. And at UCF Thursday night, he’ll be only 108 miles from his hometown of St. Augustine, FL. The known commodity behind Smith is Tyneil Hopper, the highly-touted recruit out of Georgia who had the first two catches of his Broncos career last year.

The three wild cards are former Borah High superstar Austin Bolt, Nebraska transfer Kurt Rafdal and everybody’s favorite walk-on from Fruitland, Tyler Eiguren. Bolt, at 6-3, 215 pounds, and one of the fastest players on the team, could turn into the most unique tight end in college football. For Bolt, it’s all about knowing the new offense. If he masters it, Plough could put him in position to be a matchup nightmare. Rafdal, at 6-7, 240 pounds, is another story. He was seldom-used by the Cornhuskers, but he didn’t come to Boise State to sit. As for Eiguren? You go, Grizzly grad.

I mentioned Tuesday that Boise State and UCF both moved to Division I-A 25 years ago. The year 1968 is significant, too. That’s when the Broncos began playing four-year football, and when UCF opened. The Knights didn’t begin playing football until 1979 in Division III. What’s happened since then—on the field and off—has been stunning. Once a commuter school, enrollment at UCF has grown to more than 66,000, the fourth-largest campus in the country. The Knights made it to BCS/New Year’s Six bowls in 2013, 2017 and 2018, winning two of them. The most significant was a Peach Bowl win on New Year’s Day 2018 over Auburn, whose coach, Gus Malzahn, has taken the reins of the UCF program. The fans in Orlando are riding the wagon—the Knights sold a record 28,000 season tickets in 2019.

Here’s a streak that’s on the line Thursday night: Boise State has gone 15-0 against non-conference Group of 5 opposition since joining the Mountain West. That’s from the Broncos’ official release for the UCF game. There could be an asterisk next to that, as BYU is the equivalent of a Group 5 program (Boise State is 5-4 against the Cougars since 2012). But let’s go with the 15-0 thing. There’s been no opponent even close to the quality of UCF in that run. Marshall in 2019 might be the closest. That was a 14-7 victory on the blue turf.

Six former Boise State standouts joined Brett Rypien and Curtis Weaver on the waiver wire Tuesday as NFL squads trimmed their rosters to 53 players. John Hightower was cut by the Eagles, David Moa by the Giants, Donte Deayon by the Rams, Darian Thompson by the Cowboys and A.J. Richardson and Marcus Henry by the Cardinals. Most have a shot at practice squads, but there’ll be some uncertainty until it happens. Henry, for example, is 28 years old and has been trying to stick in the NFL since 2016. He was given a “waived/injured” designation by Arizona.

LIVE AUDITIONS FOR THE VANDALS

Idaho coach Paul Petrino is sticking to his guns. The Vandals won’t name a starting quarterback between Mike Beaudry and CJ Jordan until the third game of the season (UC Davis). Beaudry and Jordan will alternate this Saturday against Simon Fraser in the Kibbie Dome, and Zach Borisch, who rushed for 205 yards at Eastern Washington last spring, will have his own set of plays. “We’ll have a package in for Zach every week, that’s for sure,” said Petrino Tuesday on Idaho SportsTalk. Borisch is still listed as a running back on Idaho’s roster.

Boise State made its men’s basketball non-conference schedule official on Monday. The only significant addition is a home game against Cal State Fullerton on December 19. The Broncos are hard-selling their home dates with Saint Louis, Tulsa and Santa Clara, which are all in the top 150 of the NCAA NET rankings. There’s no sizzle with fans, but those are good opponents. This kind of caught my attention: San Diego State has finalized its men’s slate, too—with a game at Michigan on December 4. The Wolverines had a late opening on their schedule, and Aztecs coach Brian Dutcher, a former Michigan assistant, worked his relationship with one of his former players there, UM coach Juwan Howard.

THE FAIR IS GONE, THE HAWKS ARE BACK

The Boise Hawks have embarked on a Western Idaho Fair road trip ever since Memorial Stadium was built in 1999. The one just completed was the oddest ever—three games in Missoula followed by nine straight in Idaho Falls. But the Hawks went 7-5 on the trip, capped by a 15-6 win Monday night that saw them pound out 25 hits. Two players, Roby Enriquez and Tyler Jorgensen, went 5-for-6. Boise opens its final homestand tonight with a one-game Southern Division lead over Grand Junction—and it’s those same Rockies who are in town for a six-game series.

This Day In Sports…brought to you by GREENWOOD’S SKI HAUS…their season is kicking off, too!

September 1, 1984: BYU launches its national championship run with a 20-14 upset of No. 3 Pittsburgh. It was the first live, regular season college football game ever televised by ESPN. Cougars quarterback Robbie Bosco threw for 325 yards, including a 50-yard touchdown pass to Adam Haysbert with 1:37 remaining that provided the winning points. The victory jumped BYU from unranked to No. 13 en route to its first and only national crown (the Cougars also won a ninth straight WAC title).

Weaver weaves his way to the top