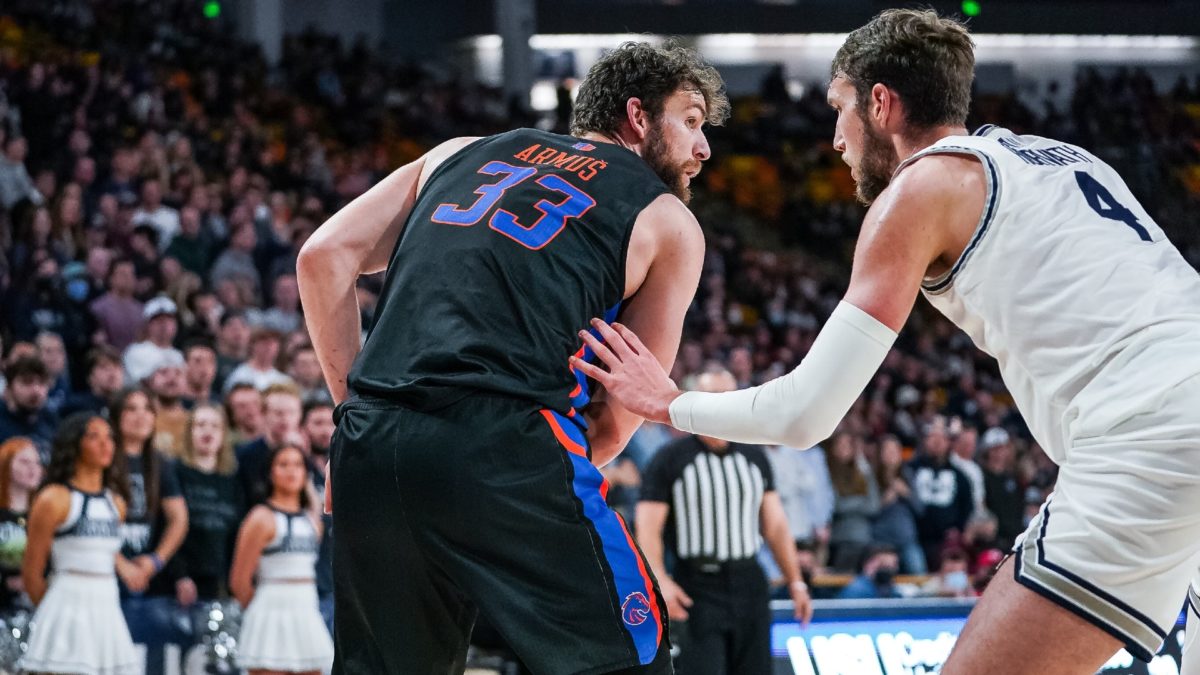 We’re in February. You know what I’m talking about, Bronco Nation. This men’s hoops team feels different, but let’s just be aware of some things that could derail Boise State down the stretch. One is three-point shooting. The Broncos are hitting 33 percent for the season, and sometimes they go off the rails. They shot 25 percent from deep at Wyoming and 28 percent versus San Jose State, for example. This kind of ties in: those dreaded lulls. Over the last 9½ minutes of the game against the Spartans, Boise State was 2-for-17 from the field. Granted, the Broncos were in cruise control, but that would have been deadly in some of their single-digit wins.

There’s Mladen Armus’ slump. The 6-10 Serbian seems to have lost confidence since his monster 22-point, 19-rebound game at Utah State. Armus has a total of 17 points combined over the past five games. And his free throws have been Shaquille O’Neal-esque—he is shooting just 36 percent from the line. Finally, health. Coach Leon Rice told Bronco Nation News’ B.J. Rains that Emmanuel Akot was just 30-40 percent at Wyoming last week’s due to a nagging knee injury. Rice held Akot out of Boise State’s win over San Jose State last Saturday, hoping that—and six additional days of rest—will bring Akot close to 100 percent for the UNLV game Friday night in ExtraMile Arena.

THE QUEST FOR TRUE CHAOS

In terms of crowd support, or “bringing the chaos” as they like to say, this is a pivotal weekend for Boise State in Extra Mile Arena. UNLV comes in Friday night and Colorado State visits on Super Bowl Sunday as the games get bigger and bigger. The announced attendance for the win over San Jose State last Saturday was 10,456, no-shows notwithstanding, but the noise was occasional. The Broncos’ student section has to be the catalyst. Not that I’m suggesting the nastiness and obnoxiousness of the infamous Utah State students and their colleagues around the Dee Glen Smith Spectrum are in order, but something in between that and the Boise environment would be nice. Broken record time: in the late 1980s, when the Broncos drew 10,000-plus all the time, the difference was the atmosphere. The crowd would bring the noise. Every. Defensive. Possession. That’s where today’s Bronco Nation needs to go.

You could see early on during their true freshmen seasons 10 years ago that Anthony Drmic and Derrick Marks were going to be something special long-term in Boise State men’s basketball. It took a little longer to see that from Tyson Degenhart in the present, but there is mounting evidence that the true freshman from Spokane is in that league. Degenhart scored a career-high 23 points in the win over San Jose State Saturday, becoming the first Bronco freshman since both Drmic and Marks to post multiple 20-points games. And the 23 against the Spartans were the most by a Boise State freshman in a conference game in 28 years. What was the result? Degenhart’s sixth Mountain West Freshman of the Week award.

KHALIL HAD A KUPP-LIKE WEEK

Last Thursday was former Boise State star Khalil Shakir’s 22nd birthday. He celebrated it in Mobile, AL, wowing scouts during practice for the Senior Bowl. Then when the game rolled around last Saturday, Shakir was nowhere to be seen. Was he injured? His agent, the renowned Leigh Steinberg, indicates he was not. Steinberg hinted Tuesday on Idaho SportsTalk that Shakir had simply done what he needed to do. “What’s really important is what you do at (Senior Bowl) practices, and he had some terrific practices,” said Steinberg. All week long, Shakir received rave reviews. Here’s my favorite headline from Gary Davenport of Bleacher Report: “Khalil Shakir Making Cooper Kupp-Like Rise Up Boards.”

THE UNDERSIZED GUY WITH THE OVERSIZED PERSONALITY

Here’s hoping Donte’ Deayon gets some meaningful snaps for the L.A. Rams Sunday in the Super Bowl against Cincinnati. Deayon’s not one of the stars the media follows in the ramp-up to this game, but they can’t miss him. If the Rams are together and jovial, you’ll see Deayon and his 5-9, 159-pound frame right in the middle of it. That’s one of the things that made him popular at Boise State. The other was interceptions. Deayon and Darian Thompson were the “Pick Brothers” during their years as Broncos. They combined for 36 interceptions from 2012-15 (Deayon had 17 of them). The cherry on top in Deayon’s career was his pick-six in the 2014 Fiesta Bowl against Arizona. Now, despite his limited defensive snaps, Pro Football Focus ranks Deayon second on the Rams behind Jalen Ramsey in coverage grade.

A longtime Scott Slant reader (and Bishop Kelly alum, naturally) pointed out that if Seth Knothe makes the roster as redshirt next season, it’ll mark the 25th consecutive year a B.K. grad will be part of the Boise State program. Knothe, who made his mark as a star running back for the Knights, was recruited as a preferred walk-on linebacker by the Broncos. And just in the nick of time, as longsnapper Daniel Cantrell’s career just ended. There have been some major B.K. contributors during the streak that dates back to 1998: Colt Brooks, Tim Brady and Tad Miller, to name a few.

It’s Wednesday morning, and Bryan Harsin is still at Auburn. He returns from a vacation in Mexico today, and there are some SEC coaches meetings tomorrow. Will he make it until then? It’s been nuts. A perfect storm has formed, it appears. Tigers boosters didn’t like the fact that the former Boise State coach started 6-2 and finished with a five-game losing streak that gave Auburn its first losing season in nine years. They don’t like the way Harsin engages—or doesn’t engage—with them. They don’t like that 20 players have entered the transfer portal, and that the Tigers’ recruiting class, No. 18 in the country, is only No. 8 in the SEC. (Maybe they don’t like that Harsin refuses to cheat.) They don’t like the coaching turnover. It was tough for Harsin to leave his alma mater. Now he looks like a fish out of water.

KELLEN’S BACK IN JERRY WORLD

There’s less drama in Kellen Moore’s camp now that Mike McDaniel has been hired as head coach of the Miami Dolphins. But there will always be drama. Heck, Kellen’s in Dallas. Now that he’s remaining with the Cowboys as offensive coordinator, the team has hired Robert Prince as wide receivers coach. That brings back memories of drama for Bronco Nation, as Prince was Boise State’s controversial O-coordinator during Chris Petersen’s last two seasons. But Prince was a pretty good wide receivers coach, and he’s succeeded in the NFL. Let’s go back to his first stint with the Broncos from 2002-04. He helped develop the WAC’s most explosive offense with wideouts like Jay Swillie, Lou Fanucchi, Billy Wingfield, Lawrence Bady, T.J. Acree and Tim Gilligan. A lot of catches and yards in that group.

Coming off two losses in three games at Wichita, the Idaho Steelheads are back in the cozy confines of Idaho Central Arena for a three-game series against Tulsa beginning tonight. Just in time for the series, the Steelheads got mainstays Will Merchant and Evan Wardley back from the AHL’s Texas Stars on Tuesday. The COVID-caused churn trickling down from the NHL appears to be calming down. And Troy Merritt’s 2021-22 season hit a peak last weekend, as he tied for fourth at the Pebble Beach National Pro-Am. Merritt was in contention until a double-bogey Sunday on the 17th hole, but he still made $391,000 and posted his best finish of the campaign. Tomorrow the former Boise State star tees off at the Phoenix Open, home to the wildest galleries in golf.

College of Idaho, now perched atop the Cascade Conference, closes out its regular season home schedule with games against Northwest on Friday and Evergreen on Saturday. The Yotes have already clinched a home game in the quarterfinals of the conference tournament in two weeks. And Northwest Nazarene is one those teams playing COVID-catchup. NNU has played only two home games in the past two months, but the Nighthawks have three games in five days in Nampa this week. They beat Saint Martin’s 71-65 Tuesday night. Coming up for NNU: Alaska-Anchorage on Thursday and Alaska-Fairbanks on Saturday.

February 9, 1992, 30 years ago today: Three months after stunning the world with the news he had contracted the HIV virus and was immediately retiring from the Los Angeles Lakers, Magic Johnson returns to play in the 42nd NBA All-Star game in Orlando. Despite having not played that season, Johnson scored 25 points in 29 minutes as the West beat the East, 153-113. That summer he’d play for the USA Dream Team at the Barcelona Olympics. Then came another break, including some coaching for the Lakers, before one more NBA comeback in 1995-96.

The danger of being a two-touchdown favorite