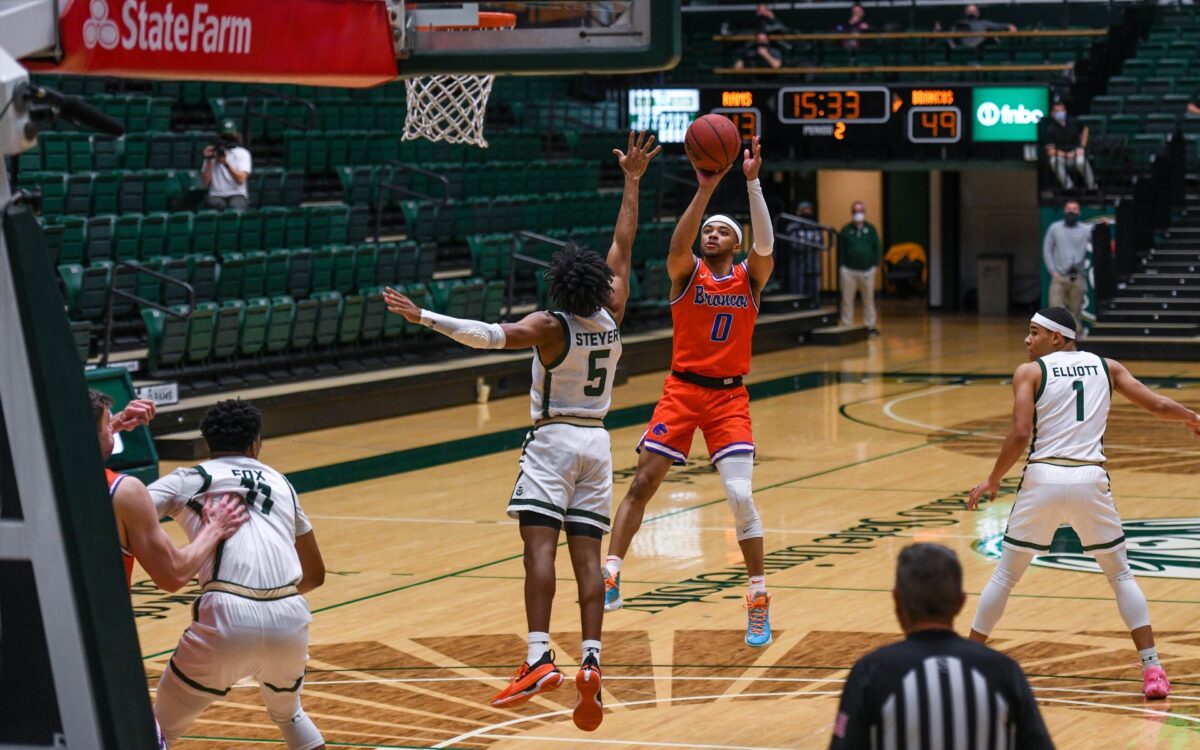 There was nowhere to go but up after the thrashing Boise State took at Colorado State last Wednesday. Would it be up enough to offset that 78-56 defeat? On Friday night, the Broncos looked like the team to which we had become accustomed the first two months of the season, turning things around with an 85-77 win in Moby Arena. Boise State had the “want to” that was mostly missing in Game 1, defending with zest and attacking the hoop. With Marcus Shaver Jr. going off for 21 points on the night, Boise State started the second half on a 32-8 run and led by as many as 23 points with just under 10 minutes remaining.

While last Wednesday’s loss was a setback in Boise State’s hopes to get into the Top 25, it was not a disaster in the NCAA NET rankings, thanks to Friday night’s bounce-back. The Broncos went to Fort Collins ranked No. 15 in the key metric for the NCAA Tournament committee. The only dropped to 22nd following the pounding, and jumped back up to 19th after the victory in Game 2. Maybe the computers looked at all those missed free throws and gave Boise State a mulligan for that. They were an anemic 12-for-24 from the stripe before Abu Kigab salvaged the night with six made freebies in the final 31 seconds of the game. The latest daily update keeps the Broncos at No. 19, so they’re still theoretically in good shape. But there are potholes ahead, beginning this weekend at Nevada.

We’re still waiting for the official announcement, but the final key piece of Andy Avalos’ Boise State internal staff is Kiyoshi Harris, the head coach at Independence Community College in Kansas. Harris himself has confirmed it. Independence has been made famous by the Netflix series “Last Chance U,” where Harris made his mark by taking over as head coach for the 2019 season and turned a 2-8 team into an 8-2 champion. He is set to become the Broncos’ Player Personnel Director, taking over the post of recruiting ace Darren Uscher, who joined Bryan Harsin’s staff at Auburn.

A BATES BREAKTHROUGH IN MOBILE?

John Bates got the majority of the tight end snaps for the National Team Saturday at the Senior Bowl. The former Boise State standout had one catch for 13 yards, had another grab nullified by a holding call and was targeted on a third in the end zone. Bates played well in all facets, but the work was actually done by kickoff. It was in the practices last week that copious notes were taken by NFL scouts, and Bates was constantly featured in highlights. Sources told KTVB’s Jay Tust that Bates met with all 32 NFL teams during his time in Mobile.

Luke Patterson of SI.com called Bates the “most impressive receiver” during the week, including wideouts. “Bates had scouts and analysts audibly ‘oohing’ and ‘awing’ in every single practice with his impressive catches, and route-running ability,” writes Patterson. “With shades of Tampa Bay’s Cameron Brate and Philadelphia’s Zach Ertz to his game, Bates was a dynamic red-zone monster the entire week.” He’s now a definite draft prospect.

Troy Merritt endured a rugged weekend at the Farmers Insurance Open, but at least he was playing. Merritt made the cut Friday despite a one-over 72, as Torrey Pines played tough on a rainy, windy day in La Jolla, CA. The layout was still soggy Saturday, when Merritt ballooned to a 76, bagging five bogeys on the front nine. He shot a 74 on Sunday to finish 72nd and earn $15,075.

The losing streak has reached four games for the Boise State women, matching their longest since they lost five straight to bridge the 2012-13 and 2013-14 seasons. The Broncos fell 75-53 to Colorado State Friday afternoon, shooting just 32 percent from the field. They were outscored 22-9 in the first quarter by CSU and could never dig out. The Northwest Nazarene men’s win streak is at six in a row after a sweep of Saint Martin’s in Lacey, WA. The Nighthawks notched 90-80 and 94-72 decisions, with Ezekiel Alley pouring in 29 points in Game 2. Meanwhile, College of Idaho was idle again after a pair of cancellations. When they play again, the Yotes will have gone 28 days during which they only played two games.

A Justinian Jessup checkup from Australia—the former Boise State star and the Illawarra Hawks faced the Cairns Taipans for the second time in 11 days last Wednesday, and Jessup did it to them again. He scored 19 points and went 3-for-5 from three-point range in a 90-70 victory. That compelled former Golden State big man Andrew Bogut to voice his thoughts on Twitter. Bogut came up with a nickname that may stick Down Under: “Flamethrower!” Jessup is shooting 63 percent (10-for-16) from deep through four games. “If Jessup keeps playing like this, he definitely could end up earning a spot on Golden State’s 15-man roster next season,” writes Drew Shiller of NBCSports.com. He was the Warriors’ second-round pick in the NBA Draft last fall.

February 1, 2015: Thanks to what some say is the worst play call in Super Bowl history, the New England Patriots prevent a final-minute touchdown and hold off the Seattle Seahawks 28-24 in the 49th renewal of the NFL’s championship showcase. With a second-and-goal at the New England one, and with one of the league’s best running backs, Marshawn Lynch, lined up behind him, Seahawks quarterback Russell Wilson threw a slant pass that was intercepted by the Patriots’ Malcomb Butler with 20 seconds remaining. That gave Pats quarterback Tom Brady his fourth Super Bowl ring and his third trophy as the game’s MVP, tying San Francisco 49ers great Joe Montana.