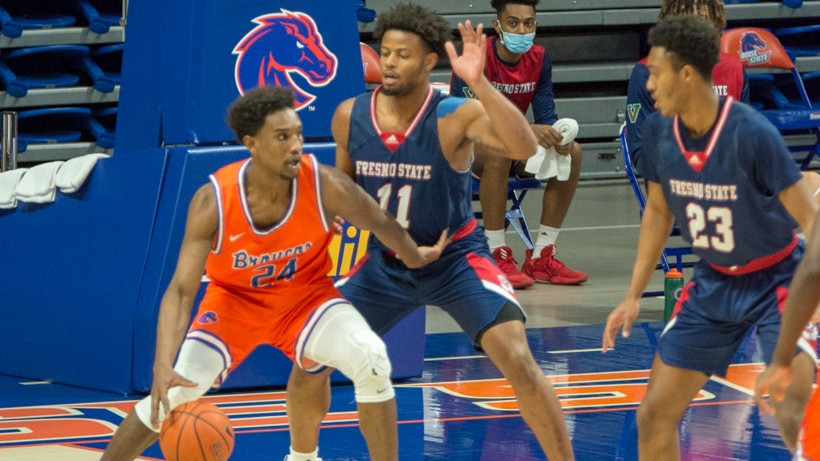 The A-game is a prerequisite as Boise State faces Nevada Thursday afternoon to open the Mountain West Tournament in Las Vegas. What will the Broncos need to deliver on that assignment? A normal Derrick Alston Jr. is a given. Guards Marcus Shaver Jr. and RayJ Dennis have to be good at the same time (they have before). Then there’s the Abu Kigab issue. If Kigab isn’t able to come back from the shoulder injury he suffered against Fresno State last week, the quarterfinal against the Wolf Pack might be the most important game of Devonaire Doutrive’s career.

Doutrive hasn’t played nearly as much as we thought he would this season, but he may have to log massive minutes Thursday. This was enlightening: Doutrive was named Honorable Mention All-Mountain West by the media Monday despite averaging only 20.6 minutes per game. Somebody out there is impressed. You just wonder what Doutrive would be like if he could ever get in a groove. He was in double-figures in both of Boise State’s defeats at San Diego State but was held to two points in the loss to Fresno State.

Mum’s the word on Kigab and the shoulder injury. Thursday will mark nine days since the mishap versus the Bulldogs. Will that be enough for a recovery? It looked serious. Kigab has hit a rough patch late in the season—he has hit just three of his last 19 shots from the field during the Broncos’ three-game losing streak. When Kigab is hot, he’s a difference-maker on both ends of the floor and can really set the tone in the paint. He’s still Boise State’s second-leading scorer at 11.9 points per game. “We’ll prepare like he is going to play,” said Nevada coach Steve Alford.

It’s 13 in a row for the Boise State women at the Mountain West Tournament. The underdog Broncos, who had lost by a combined 42 points in their two games against Colorado State this season—at home, no less—stunned the Rams 78-65 Monday night in the quarterfinals. Jade Loville poured in 29 points, 12 of them in the fourth quarter, and Boise State’s legion of freshmen played beyond their years in their most important game yet. Included were 11 points and 13 boards from Alexis Mark, marking her third double-double of the season. “I thought our kids had great will,” said coach Gordy Presnell on the Mountain West Network. That’s reflected in rebounding, where the Broncos had a 51-33 advantage. They advance to tonight’s semifinals against Wyoming.

CORD CALLS IT A CAREER

Just Monday I said, “Hopefully the guy can catch a break at some point.” That was Boise State quarterback Chase Cord and the fact that he was going to miss spring football for the third straight year. Now, Cord has elected to medically retire from the sport after a spate of injuries kept him off the field for most of the past three years. We’ll never know what might have been, but we got a glimpse of it on his second snap as a Bronco. With Boise State leading 49-20 at Troy in the fourth quarter in 2018, Brett Rypien’s night was done as Cord came on to make his debut. Almost immediately, he peeled off a 44-yard touchdown run. Cord posted photos of the play on Twitter Monday night. Had he stayed healthy, that’s what could have been: a lethal combination of strong legs, a strong arm and strong character.

It may end up being the “year of the fan,” but it won’t be the “spring of the fan” in Caldwell. The Frontier Conference has voted to stick with its no-fans policy for the brief football season that begins Saturday, including College of Idaho’s opener in Caldwell against Montana State-Northern. There’s a limited number of fans allowed in Idaho Central Arena in Boise this week for the Big Sky basketball tournaments. But you can’t walk up to the door and get tickets—all those have been distributed through member institutions, primarily to “family and friends.” Meanwhile, the Idaho State and Idaho women, seeded Nos. 1 and 2, know their quarterfinal opponents today. The Bengals face Portland State at 11 a.m., and the Vandals take on Northern Arizona at 5 p.m.

Tina Bird has things going in her second season as solo Boise State women’s gymnastics coach. I say solo because she shared duties with Neil Resnick from 2008-19. The Broncos are ranked 18th in the nation after defeating Washington and Stanford in a three-way meet in Seattle on Sunday. Boise State is 3-0 against the Pac-12 this season, having also defeated No. 13 Oregon State in the opener. It’s the first time in 24 years the Broncos have downed at least three Pac-12 schools during the regular season. They have a shot at a fourth Friday night, although this would be the ultimate upset. Boise State closes the regular season against No. 7 Arizona State in ExtraMile Arena.

March 9, 1980: In one of the biggest first-weekend upsets in NCAA Tournament history, UCLA stuns Ray Meyer’s top-ranked, unbeaten DePaul squad, 77-71, in the second round of the West Regional—despite 23 points from the Blue Demons’ Terry Cummings and 19 from Mark Aguirre. Led by freshman guard Rod Foster and high-scoring forward Kiki Vandeweghe, coach Larry Brown’s Bruins would make it all the way to the national championship game before falling to Louisville, 59-54.