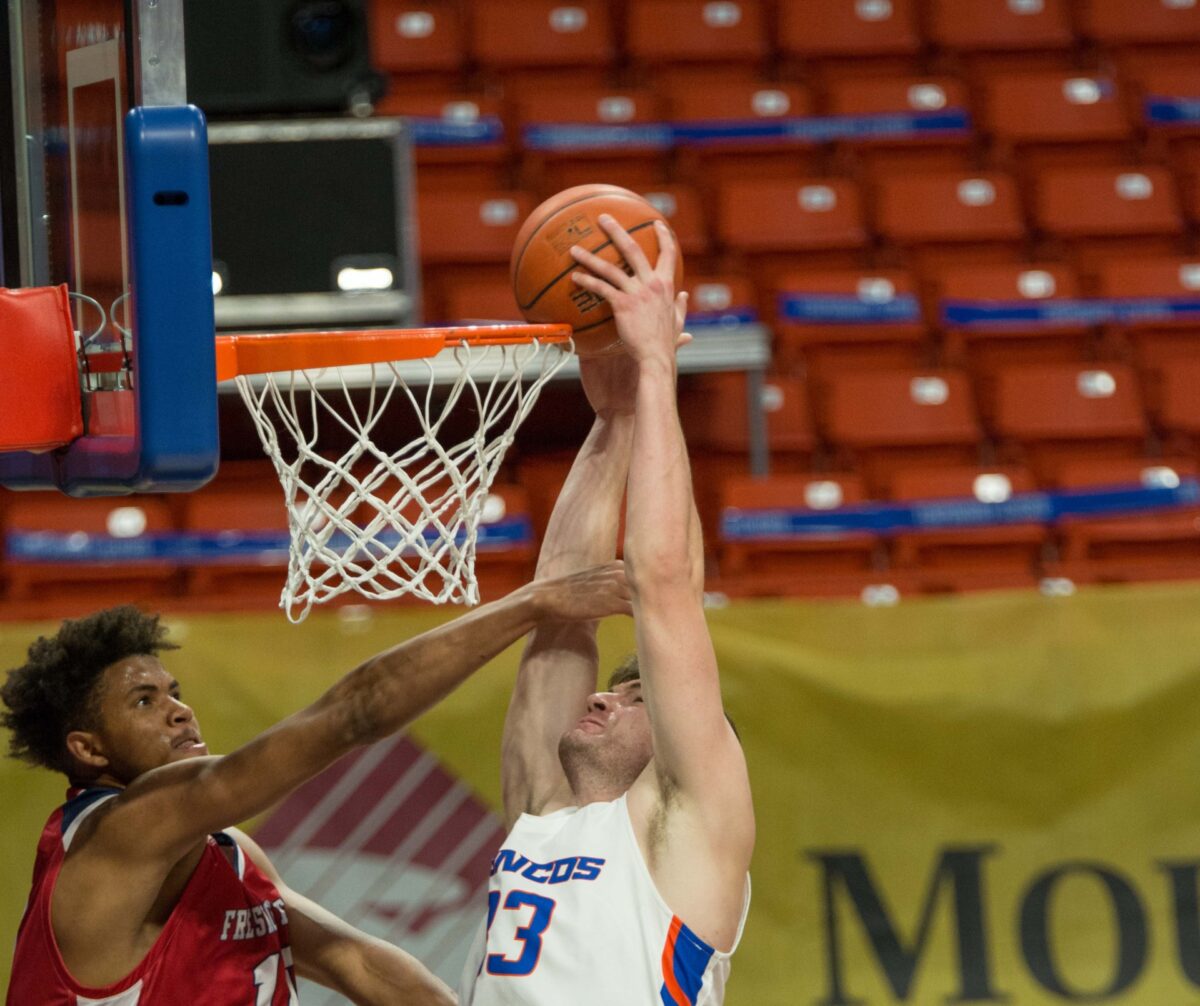 It won’t matter if Boise State doesn’t sweep Colorado State in Fort Collins this week—a difficult task against a team that just took down Utah State. But if the Broncos can pull it off against CSU, they know where they’ll be a week from now. Boise State jumped up to 108 points in the AP Poll Monday and is first in line to get into the Top 25. The Broncos are second in line in the Coaches Poll, garnering 60 points. Just five weeks ago they had nary a vote in either poll. Now, they are on the rankings’ doorstep, but there’s no margin for error. And oh by the way, another team took down USU Monday night: UNLV beat the Aggies 59-56, giving Boise State a two-game lead in the Mountain West in the loss column.

Let’s take a timeout for stats. We sometimes do that on the Scott Slant, of course. For starters, Boise State men’s basketball is No. 1 in the Mountain West in scoring offense and No. 2 in scoring defense. That’s a pretty good combination. The net result is the Broncos in the top spot in scoring margin, winning by an average of 20.1 points per game this season. Boise State also leads the conference in shooting at 47.4 percent, three-point shooting defense, allowing 28.9 percent, turnover margin at plus-4.6, and assist-to-turnover ratio. And the Broncos are top three in just about everything else, it seems. Now we’ll see how those numbers hold up, as their strength-of-schedule ratchets up.

CHANCE AT A SMATTERING

It is beyond odd looking at Mountain West men’s basketball attendance figures. Zero, zero, zero and more zeroes. The only schools who have allowed fans in are Nevada, Wyoming and Utah State—and the Aggies are the only team still doing it. But Boise State coach Leon Rice told media there is talk deep inside the Varsity Center of a plan to get a limited number of fans inside ExtraMile Arena for the Broncos’ final four home games against UNLV and Utah State. It’s been agony for fans to miss out on seeing what is probably Boise State’s best team ever. You can be sure, though, that there will be strict rules if this happens—and zero tolerance for any violations of protocol. As it should be. “Jeremiah (Dickey, the athletic director) is navigating that right now,” said Rice. “I’m keeping my fingers crossed.”

While there’s buzz out West about mid-major riser Boise State, there’s the same back East about the unsung Eagles of Winthrop (partly because of the crazy viral calls by their play-by-play announcer). Winthrop is 15-0 and has won 20 straight games dating back to last season, and the Eagles have done it with the help of former Northwest Nazarene standout Adonis Arms. The 6-6 senior guard has made up for lost time after sitting out last season due to NCAA transfer rules. Arms is averaging 11.6 points and five rebounds per game as a sixth man for Winthrop. He was the Great Northwest Athletic Conference Player of the Year for NNU two seasons ago.

THE STAFF IS A WRAP

Andy Avalos has completed his Boise State staff, in just over two weeks time. The Broncos got a Bobcat after all—not (now former) head coach Jeff Choate, who’s off to Texas, but defensive coordinator Kane Ioane. Ioane will be co-defensive coordinator and safeties coach at Boise State. He has the right pedigree. Ioane, who was on the Montana State staff from 2005-16, returned to MSU in 2019 after spending two seasons as a defensive analyst for Chris Petersen at Washington. It probably wasn’t easy for Ioane to leave Bozeman. He was a four-time All-American at Montana State (2000-03), was the 2003 Big Sky Defensive MVP and was a 2014 MSU Hall of Fame inductee. Ioane ended his playing career as the Big Sky’s all-time leader in tackles.

HOME-AND-HOME BOOKENDS IN THE BIG SKY

At this point, there will be a Big Sky football season. It’ll look entirely different, but doesn’t everything right now? It’s a good plan. Eight teams have elected to play the conference slate, which opens February 27. Each school begins and ends with a “drivable” home-and-home series—for Idaho it’s Eastern Washington, and for Idaho State it’s Weber State. The Vandals and Bengals face each other in Holt Arena on April 3. Two open dates are placed inside the schedule—March 20 and April 17—to cover any rescheduling needs due to COVID-19. There will be a 16-team field for the FCS Playoffs, which begin April 24.

YOTES IN THE SAME BOAT

Likewise, five games is better than no games for College of Idaho. After sifting through opt-outs and timelines, the Frontier Conference and the Coyotes got it figured out. It seems so long since C of I’s historic 11-1 season and trip to the quarterfinals of the NAIA Playoffs in 2019—the Yotes are hungry to build on that. They’ll open with a non-conference game against Montana State-Northern on March 13 before playing four straight Frontier contests. And there will be an NAIA postseason. The 2021 Frontier spring champion gets an automatic berth, with the.title game set for May 10 in Ruston, LA. C of I “winter camp” begins Monday, February 15.

January 26, 1986, 35 years ago today: The Chicago Bears humble the New England Patriots, 46-10, in what was at that time the most lopsided Super Bowl in history. It was supposed to be the start of a Bears dynasty, but it was a flash in the pan. It was Walter Payton’s only Super Bowl, but he never got to score a touchdown despite a perfect short-yardage opportunity late in the game. Coach Mike Ditka elected to go with a gimmick, giving the ball to defensive tackle William “The Refrigerator” Perry for the final score. Personal note: my nephew, Ben, was born at halftime. Happy 35th, Ben!